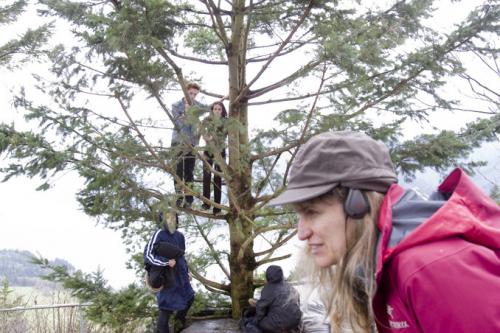 Depending on what you read, who you believe, and your general opinion of the Twilight adaptation, Summit Entertainment's decision to part ways with Catherine Hardwicke is either a good thing, a bad thing, or one heck of a double standard. The official story, courtesy of Variety, is that Hardwicke wanted more time to prep for New Moon, and didn't want to rush the production schedule. Fans of Hardwicke's work on Twilight (including both those who think she adapted the book faithfully and those who think she actually improved on the book), are quick to point out that she's responsible for making a film that has raked in a whopping amount of cash - and that she's also being fired in the middle of an international press tour. Hardwicke's detractors, on the other hand, are pretty sure that Twilighters would have turned out no matter who was directing. The team over at Jezebel is rightly calling foul over the firing, based on Nikke Finke's scoop  suggesting that Summit fired the director, in part, because she was "irrational" and "difficult." As if that's ever been a reason to fire a male director (um, hello, David Fincher...). No telling yet how this is going to shake out, but even if Hardwicke's gender didn't play a role in her firing, it sure is taking center stage in the blogosphere postmortem.

Coupled with that is bad box office news for Lexi Alexander and Darnell Martin. Both Punisher: War Zone and Cadillac Records barely hit the $4 million dollar mark over the weekend (to Cadillac Records' credit, the film screened in only about 1/4 of of the number of theatres that Punisher did). I'm not alone in worrying about the impact of those numbers for other potential female directors (especially in the hard action genre). And no, neither film was an astonishing cinematic achievement. But Cadillac Records has received generally good reviews, and Punisher: War Zone is the best (and only credible) film of the Punisher franchise.

Which brings me to my point: filmmaking is a numbers game. Sure, box office earnings are an insufficent way to measure directorial success for a whole heap of reasons, including the fact that directors don't control the marketing or distribution of their films. It's an unfortunate reality for female and male directors alike, but it's particularly perilous for women behind the camera. If a film directed by a woman makes a lot of money, it's a noteworthy accomplishment for female directors; if a film directed by a woman tanks, it spells potential doom. There are so few women in directors' chairs that they become stand-ins for women in film everywhere.

Since it's a numbers game, it's a numbers solution, too. We need more female directors. We need brilliant ones, and good ones, and mediocre ones. Yes, we even need more crappy directors - a lot of them - because then it won't be a big freakin' deal if their films do well or not. We need to put as many female hacks behind the camera as we can, because that's the only way we're going to cultivate any kind of film canon that includes female directors.

And getting there, again, is a numbers game. We simply have to buy more tickets to see films that are directed by women... and we have to do it on opening weekends. The only way to prove that women can bring in movie audiences is to be a part of those audiences.

Which is why I'm closing this post this post with a plug for the awesome folks over at Movies By Women, which is an organization dedicated to supporting women behind the camera.  Movies By Women is the home of the First Weekenders Group, an email newsletter telling you when and where movies directed by women are premiering.  So join up - and get to the box office.  We've got a whole of good and bad female talent to support.

The thing that pisses me off most about this whole thing is that the powers that be in Hollywood talk about how women directors and women's films are not big box office successes and that if they were things would change. Clearly, that is not true. Hardwicke made a successfully huge box office success and still got shown the door in a way that a male director never would be. This smells like sexism on top of all the ypical Hollywood bullshit about money. Check out my post at http://www.womenandhollywood.blogspot.com/

What really annoys me is how the studio has tried to minimize Hardwicke's directoral role - making comments like the Director of Photography (male) was the person actually responsible for the look of the film. I don't believe that a male director turning in a movie earning $140 million+ on a $37 million budget would be subject to the same disrespect.

I'm a director/producer/writer. I have a short screenplay, a feature & a life story that I optioned from a well known blog writer.
All 3 are wild women, character driven stories that do not fit the "chick flick" stereotype.

I've worked as crew to pay my way while learning as much as I can about this medium (coming from theatre and art). I've produced, production managed, assistant directed, coordinated and supervised. I've supported other peoples projects. All male directors. Very often I am the only female in the crew that is not m/u hair and wardrobe.

I agree that Hardwicke's firing was completely unwarranted, but I find the irony in that film in question she was fired over was Twilight, one of the most blatantly sexist stories I've seen in recent years.
I'd love it if you could do a piece detailing the mysogyny in Twilight. The heroine Bella, despite being supposedly the smartest girl in her grade, has no hobbies, interests, or desires outside of being with her boyfriend. Edward, her boyfriend, is abusive, controlling and manipulative (not to mention that he watched her sleep every night 3 months before they met.) In the fourth book, Bella passes out during sex and wakes up with bruises on her body, finding out Edward finished while she was passed out.

PLEASE please do a story on Twilight...I hate seeing my friends little sisters reading this book, thinking it is romantic and idealing Edward as the ideal man.

It has been so well publicized that this was the highest grossing film ever by a woman director. And of course that is the bottom line in Hollywood. I was quite shocked to hear she was not directing the 2nd installment. I never heard, until reading this, that some said CH was "difficult and irrational"-- whatever the hell they are talkling about.
Her firing is really just so strange--with those box office numbers. It almost seems like a risky move on the part of Summit.
I am one of those who thought the movie was really an improvment on the book.

If to judge all series of books (Twilight, New moon, Eclipse, Dawn), that favourite are "Twilight". In "Twilight" it is so much emotions that it is possible to re-read them their infinite number of times, and all as to take pleasure

Not casually one of Babel's heroes asserted, that Frenchmen have thought up three things: the woman, the novel and a dinner.