Welcome to Breeder's Digest! I'm so happy to be guest-blogging here at Bitch for the next two months. As the name of the blog signifies, I'll be tackling all things mom & dad related with just that perfect touch of pop culture thrown in. Thanks for reading! 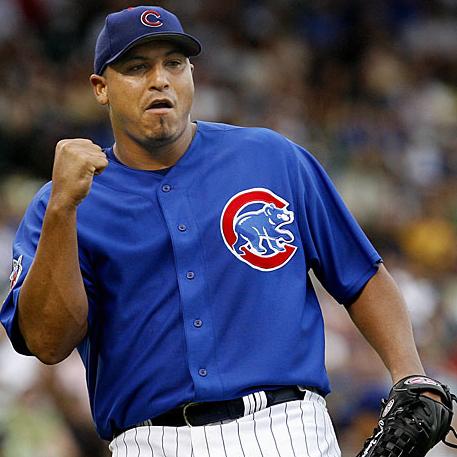 On Friday, June 5, 2009 Chicago Cubs ace pitcher Carlos Zambrano dropped a bombshell after winning his 100th baseball game. He's retiring in five years after his contract is up at the age of 31. Why would someone do that? Why would someone who is being paid a lot of money ($91.5 million is his current contract) walk away like that?

Zambrano's reason is he misses his family:

"You know how many Mother's Days I haven't spent with my mother? Twelve. You know how many things I've been [missing] in my life? It's good to be here, it's good to play baseball. But in five years … I will retire. And I won't have to see you anymore."

The reaction to this statement can be summed in "Oh, Carlos!"

* Do I really believe he is going to retire in five years? Of course not.
* Of course, no one is taking Zambrano's retirement talk the least bit seriously. Cubs manager Lou Piniella put it best, dismissing it with a laugh by saying, "Ask him in a week, and he'll probably want an extension."
* There is no way someone as competitive as Zambrano can walk away from baseball.

As the die-hard Cubs fan I am, I know that Zambrano says things without thinking. But I can't help but get a big anti-daddy feeling to the reactions. Perhaps because more level-headed daddies like Derrek Lee and Ryan Dempster haven't packed it in to spend more time with their ill-daughters?

Do I believe that Zambrano will retire at the end of the career? I really can't guess. One theory that was batted around over the weekend in my home is that perhaps the reason he's such a competitor is that he doesn't want to miss all of his daughter's lives or pitch until his arm falls off. He has limited time in the big leagues.

I don't remember such huffing when Lindsay Davenport retired to have her son. I do remember the WOWs when she decided to return to tennis afterward. Despite not being the first woman to do so, Candace Parker is wowing observers over how quickly she may return to the WNBA after giving birth on May 13th. And through all of the news reports, I haven't seen anything about Parker being "too competitive" to stay home and change diapers. Although she has claimed that label.

Whatever Zambrano does is up to him...Just as long as he wins the World Series for the Cubbies first.

I really enjoyed reading this -- and a bunch of the other posts on this blog. Great stuff!

Two of my favorite things - Bitch + The Cubs!!! Woot! Most of what Zambrano says is just crazy talking-before-he-thinks, but it is nice to hear him say something that usually only successful women are quoted as saying.