Carrie Mae Weems and the politics of photography | Bitch Media

Carrie Mae Weems and the politics of photography 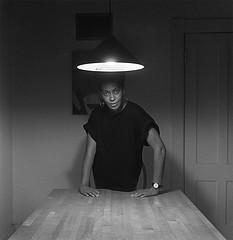 “My responsibility as an artist is to work, to sing for my supper, to make art, beautiful and powerful, that adds and reveals; to beautify the mess of a messy world, to heal the sick and feed the helpless; to shout bravely from the rooftops and storm barricaded doors and voice the specificity of our historical moment.”
That incredible statement is by Carrie Mae West, who began taking pictures in 1960s San Francisco to document the political, and grew to make her photographs the political, taking on historical construction of race, gender, and representation. Although she moved to San Francisco to study dance, Weems soon found her calling through photography, using her first camera to document labor movements the of early '70s Bay Area. She's cited both The Sweet Flypaper of Life and the Black Photography Annual as pivotal works, influencing her understanding of black photographers as well as black representation, and inspiring a new way of seeing herself–both in front and behind the camera. The intriguing and frequently political subjectivity of the photographer, spectator, and object would become central themes of her work. One of her first projects, Family Stories is a series of pictures of Weems' own family, accompanied by textual commentary and audio interviews and was completed from 1978-1983. In an interview with Cleveland NPR affiliate WCPN Weems tells Dee Perry that by using her own family, she was

…really trying to describe this family as a real family. Proud, difficult, complicated, working class, coming out of the South, moving to the Northwest… that experience and what it was like for my family, but using my family as way about talking about the General. About this hugeness of migration that was important to the building of America. In the Kitchen Series, Weems again inserts herself into the a larger narrative of African-Americans, inserting herself as a woman at a table, interacting with children, female friends, and a man, but subtly constructing the scenes differently, calling into question the representation of the varied roles of black women. Both in the Kitchen Series and Family Stories, Weems says

I use my own constructed image as a vehicle for questioning ideas about the role of tradition, the nature of family, monogamy, polygamy, relationships between men and women, between women and their children, and between women and other women underscoring the critical problems and the possible resolves. In one way or another, my work endlessly explodes the limits of tradition. I'm determined to find new models to live by. Aren't you?

It's fair to say that black folks operate under a cloud of invisibility—this too is part of the work, is indeed central to the work….This invisibility—this erasure out of the complex history of our life and time—is the greatest source of my longing….That there are so few images of African-American women circulating in popular culture or in fine art is disturbing; the pathology behind it is dangerous. I mean, we got a sistah in the White House, and yet mediated culture excludes us, denies us, erases us. But in the face of refusal, I insist on making work that includes us as part of the greater whole. Black experience is not really the main point; rather, complex, dimensional, human experience and social inclusion—even in the shit, muck, and mire—is the real point. The Capture of Angela from Constructing History series, 2008

In her series “From Here I Saw What Happened and I Cried,” Weems uses not her own photographs, but 18th-19th century stills of black men and women owned by Harvard. Presenting them in a daguerreotype frame, as they would have been at the time, but tinting them a sinister red, Weems' inserts her own white text over the images, soberly addressing the subjects of the photos regarding the racist cultural legacy left by these historical–but constructed–artifacts. In an upcoming episode of contemporary art show Art:21Weems reveals there are even more politics go beyond the work itself:

Harvard threatened to sue me for use of the first photographs that I showed you. And I thought, “Harvard's going to sue me…for using these images of black people in their collection. The richest university in the world. I think that I don't have really a legal case, but maybe I have a moral case… that might be really useful to carry out in public.” And so after worrying about it and thinking about it I called them up and I said “I think your suing me would actually be a really good thing…you should. And we should have this conversation in court.” I think it would be really instructive for any number of reasons. Certainly for artists that are engaged in the active appropriation, who think that there is a larger story to tell.

Check out the preview, below and check your local listings for Art:21's “Compassion” episode playing Wednesday, October 7th!

Make sure to check out her work for yourself, this is an insufficient space to cover all of her efforts!

Thank you SO MUCH for posting this. I'm overseas right now doing an artist's residency, and I've had some recent epiphanies, and right in the middle of a little internet research I check out this website like I usually do and find this totally related brief on Carrie Mae Weems. My brain feels like soda! My heart is expanding! Yes! Positive visibility yes!!

(please pardon my incoherence, I just needed to share my feelings with the world right now)

Thank you so much for such a well written article on such an amazing photographer.

Relevant: Popaganda: Who Writes Our History? 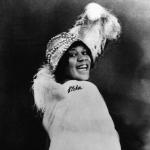 by Sarah Mirk
History isn't static—it's the stories we tell ourselves about the past.