Here's Why You Should Know About the Case of CeCe McDonald CeCe McDonald is scheduled to be released from prison this month. This is a very big deal. Her case is a prime example of how the legal system can (and often does) work against protecting LGBTQ people.

If you haven’t been following CeCe’s case, here’s a recap: On June 5, 2011, CeCe McDonald, a 23-year-old black trans woman, and her friends were walking down a Minneapolis street. As they passed a bar, a 47-year-old white man named Dean Schmitz. began shouting racial slurs at CeCe. “Did you think you were going to rape somebody in those girl clothes?” he yelled. Schmitz and two other bar patrons then attacked CeCe. During the attack, a bar patron smashed a glass into CeCe’s face, slicing her cheek. CeCe pulled out a knife and held it in front of her. According to her testimony, Schmitz rushed her and impaled himself on her knife—he later died from the stab wound and CeCe was arrested and charged with second-degree murder. The woman who smashed glass into her face was never arrested or charged.

There were numerous problems in how the system treated CeCe: During pre-trial motions, the judge ruled against CeCe’s ability to introduce evidence showing that the attack against her was motivated by her race and gender identity. Both Schmitz’s tattoo of a swastika and his three previous convictions for violent assault were ruled inadmissible. The judge also refused to allow an expert witness to testify about the pervasive and systemic violence faced by trans people on a daily basis.

Faced with second-degree murder charges, a hostile court, and the possibility of being sentences to twenty to forty years, CeCe pled guilty to second-degree manslaughter due to negligence. She was sentenced to forty-one months in prison and was sent to a men’s prison. Upon arrival, prison medical staff reduced her prescribed dosage of hormones. A call-in campaign by supporters forced the prison to follow her prescription order.

Although CeCe’s story garnered national and international support and outrage, she’s not the only trans person who faced violence simply by walking out her front door. A report by the National Coalition of Anti-Violence Programs found that 50 percent of LGBT murders in 2012 were of trans women. The report also noted that trans survivors of violence are more than three times as likely to experience further violence from the police than cisgender survivors. On top of that, trans people go to prison at a disproportionate rate: a study by the National Center for Transgender Equality found that 16 percent of people who self-identify as trans have been incarcerated. Authorities frequently target trans people, subjecting them to verbal harassment, humiliation, excessive strip searches and isolation as well as refusing to recognize their gender identities. Laverne Cox, a trans woman of color who plays a trans prisoner on Netflix series Orange is the New Black, understands the pervasive threat of interpersonal and systemic violence against trans people. In press interviews, Cox has taken the opportunity to draw attention and visibility to CeCe’s story. She has recently announced that she’s producing a documentary called FREE CeCe! which includes an in-prison interview between her and CeCe. “But for the grace of God I could be CeCe McDonald,” Cox said in a recent interview. “CeCe’s case represents a long list of instances of violence against transgender women who are disproportionately trans women of color.”

Jac Geres, co-producer of FREE CeCe!, witnessed some of the everyday humiliation facing CeCe and many other trans people behind bars. In an interview with Persephone Magazine, Geres recounted the interview between Cox and CeCe in the prison’s visiting room. “When we had completed the interview, the guard told me, speaking of CeCe, ‘He would need to be strip searched’ upon exiting the room. CeCe just smiled and laughed it off, ‘They can’t get enough of me here.’ I was humbled by the positive attitude of CeCe, and her ability to cope inside the prison walls.” Recognizing that trans people with less visibility and support are more vulnerable to staff abuse and harassment, CeCe has utilized her own fame to garner support for other incarcerated trans women. In July 2013, she asked supporters to write letters on behalf of Jenni Gann, a trans woman incarcerated in a California men’s prison. Gann has reported repeated sexual harassment during cross-gender strip searches, including having guards ridicule her anatomy, threaten her, and exposing her to male prisoners.

CeCe McDonald will soon be walking out of prison. According to her support website, “because of the incredible support of her community here in Minneapolis and around the world, she will be safe, comfortable, and cared for when she rejoins us.” But supporters are urged not to forget that, just because CeCe is out of prison, the system is not fixed. Instead, her case helps show the ways in which it’s broken. (They ask that instead of sending a donation to CeCe, supporters donate to other incarcerated people (who may have less visibility and support) or abolition movements.)

“The support from everyone everywhere keeps me motivated,” CeCe wrote in a letter from prison. “It showed that people care not only about these issues that are so easily ‘swept under the rug’ by society, but about how I am doing and keeping me afloat.” But she also urges actions that go beyond her individual case: “The real issues are the ones that affect all prisoners. People should get involved in changing policies that keep people in prisons, like exclusion from employment, housing, public assistance,” she wrote. “These are just a few things that will keep people out of prisons and lead to the dismantling of these facilities.”

For more information about trans people in prison, check out the groups Black & Pink, the Prisoner Correspondence Project, and the Sylvia Rivera Law Project.

This is not entirely accurate. And before I begin I would like to say that I am trans and from MPLS as well. CeCe and her friends were on the opposite side of the street when a man, his friend and girlfriend began shouting at her and her friends. CeCe and her friends then CROSSED the street to the man, not vise versa. She had a pair of scissors in her bag that she pulled out. She then got into an altercation with the three when the mans girlfriend smashed her glass on her face. CeCe then stabbed the man with her scissors.
I am so pleased that our community stands up so hard for itself, but I believe in this situation CeCe was the aggressor and an innocent (albeit awful) person lost his life that night. Just because you're trans I don't believe the legal system should turn the other cheek. If you do wrong doing, you should be penalized just like everyone else.

Soo, suddenly, it isn't a crime to shout trans-phobic slurs to strangers on the street?

Um, no, it isn't. It never has been. Street harassment is terrible and disgusting, but it's not illegal, it's protected speech. And although I fully understand why a person (esp. a TWOC) would justifiably feel terrified and endangered by it, that's not a legal justification for murder, either.

As for the OP: can you cite your sources? The story that you're telling is pretty different than what's been reported.

In any case, I'm glad that CeCe is being released.

This isn't France--“hate" speech is not illegal in the United States because, unfortunately, but understandably, it typically falls under the umbrella of free speech.

If the speech in question can incite lawlessness or imminent danger directly (not indirectly), then it is illegal, but this is notoriously hard to prove in court.

Suddenly? It was never illegal.

It's no more illegal than some bozo on the street calling me a “skank spic" or my telling ‛em to “...to eat sh-t and die...". I don't like hateful speech, but it's one of the caveats to maintaining free speech.

No offense, but the only explanation for you calling a woman who was harassed and attacked (BY A GLASS BOTTLE IN HER FACE) by a group of outspoken racists is some nasty, deeply embedded prejudice lurking within yourself. You're relaying some of the worst-sounding unfounded scenarios I've seen people throw around about this case, all in a huge bundle of chaff.

She was a victim, of both racist homophobes and a grotesque parody of a justice system. The most important point in the article is that current policies seem almost intentionally designed to be cruel and unfair to marginalized people. Whatever your obsession with any individual case, that's the big takeaway.

If we're going to discuss the failings of the justice system as a whole we need to do so on the whole. Writing an article about the multiple examples of the failure of the justice system (which I agree is extremely flawed) is not the same thing as writing a biased and inflammatory article about the supposed "injustice" faced by a single person who took questionable action in a difficult scenario. I don't know enough about this case to argue as to this woman's innocence or guilt (or degree thereof, since it is of course not just black and white) but it's overexposure of individual cases like this and the case of Travyon Martin which if anything detract from good discussions about courts. The issue is not whether this or that individual person is guilty or not; the issue is that even guilty people deserve the due process of law and a fair trial, and when those things are denied, especially on basis of race, gender expression, sexuality or other minority status, they are being denied a basic human right.

TY for posting this! I'm so sooo glad that CeCe is finally free. 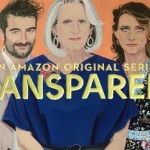 by Amelia Ayrelan Iuvino
Transparent remains excellent at what it does best: examining gender identity and Jewish identity from the perspective of an almost unbearably privileged and self-centered family unit.