Fandom and the ways in which audiences come to claim certain texts or stars in relation to their own identities is something I hope we return to several times over in the course of this series. Thinking about how The Watermelon Woman gets at the reasons and processes by which certain fan groups come to reclaim and build contexts around maligned or politically regressive films, I wanted to dialog it with other texts that get at the complicated relationships people have with their idols and themselves. There are a number of films we could choose, and I encourage readers to volunteer examples. Today, I offer up Robert Altman’s 1982 adaptation of Ed Graczyk’s play Come Back to the Five and Dime, Jimmy Dean, Jimmy Dean.

The film marks an interesting period for Altman. After a peak in the mid-70s, his film career was considered all but finished, prompting him to retreat from Hollywood. Over time, folks have raised enough questions about Altman’s gender politics to warrant a rewrite of Le Tigre’s “What’s Yr. Take On Cassavetes?” Was the man a misogynist, a genius, a messiah, or a NORML advocate? How did he treat the female characters in, say, Images, M*A*S*H*, Nashville, 3 Women, McCabe and Mrs. Miller, or later works like Short Cuts, Ready to Wear, Dr. T and the Women, and A Prairie Home Companion? I don’t necessarily have a conclusive answer that addresses his entire filmography (I hate Dr. T largely for feminist reasons), but he did include several actresses in his troupe of repertory players, including Karen Black, Lily Tomlin, Sandy Dennis, Pamela Reed, and Shelley Duvall. Depending on who you ask, he also either lionized actresses’ mastery of their craft by helping create psychologically fascinating characters or treated women like dog shit.

Spinning out further, what draws certain male directors to work so closely with women and what are the politics of such collaborations? What does it mean for Pedro Almodóvar to build entire ensembles around actresses, play with melodrama, and return to themes of incest, rape, and other forms of abuse? Or how do we understand Lars Von Trier’s artistic commitment to female suffering? How do we conceive of actresses’ professional identities and their desire to undertake challenging roles that often involve investigating emotionally harrowing terrain? To what degree is the relationship between a male director and an actress collaborative, interdependent, political, or locked in a power struggle?

We could make a number of conjectures about Altman’s relationship to the cast of Come Back, but I do have to say it boasts one hell of an ensemble. Cher, Sandy Dennis, Karen Black, and Kathy Bates all share billing. Come Back focuses on a James Dean fan club that reunites outside of Marfa, Texas in 1975, twenty years after their idol’s fatal accident. The film takes place in a Woolworth’s and shifts between the women’s present gathering and their collective past, with a mirror linking the time periods. It makes extensive use of doo-wop standards like “Sincerely,” foregrounds the importance of Christian righteousness, and juxtaposes such rigid morality against hot nights fueled by hormones and boredom to suggest the ensemble’s generation and the lack of options small-town Texas may have afforded them.

One character with an unusual relationship to the past is Mona (a haunting Sandy Dennis), an ethereal and delusional woman who claims she was an extra in the film Giant and was chosen by Dean to raise his son. The women in the group mock Mona, often dismissing her as either crazy or a liar after she tries their patience. While their treatment of Mona borders on cruel, it is also indicative of the ways they mistrust and compete with one another. However, Mona forged a deep bond with the group’s lone male member—a young man named Joe (Mark Patton). He disappeared after a high school dance when he was beaten nearly to death by a group of his peers for showing up in drag. The group encounters Joanne (Karen Black), who they first assume is a cosmopolitan window shopper from out of town. However, Joanne makes clear that she was once Joe and that she a sex change operation shortly after her exodus. It is also established that Joanne impregnated Mona when they were teenagers and the loss of the baby contributed to her fragility. The group attempt to make a pact to reunite in twenty years but Mona, shaken by her friend’s admission, refuses. The film ends with the women singing “Sincerely” in front of the mirror, followed by shots of the abandoned store. Though Joanne is treated as an oddity and a betrayer by members of the group, the film and its source material are empathetic toward her. She was able to evolve past her small-town origins and build a life and identity for herself rather than agree to the one imposed upon her. I find this to ultimately be a complex, sensitive portrayal of a trans woman from Black, particularly of its period. I also think there’s room to queer Mona’s relationship to Joe, Joanne, and James Dean, even if that’s the sort of work Mona cannot or is unable to take on as a result of her politics and upbringing. Yet I’m troubled by the idea that some of Joanne’s peers have difficulty accepting and embracing her true identity. Perhaps there’s an honesty to that irresolution that speaks to the ongoing work feminists need to do to not only include trans folk, but centralize and prioritize their specific needs and voices. I by no means want to suggest Come Back is an inherently progressive text. But it gets at and troubles not only how we make meaning out of our fandom, but reminds us of the transformative potential for individuals living within and on the fringes of those communities.

The only thing special about this particular instance of the long-suffering-tragic-trans-woman-whose-very-existence-is-played-as-a-dramatic-reveal is the quality of the acting. Any humanity the character has is to serve the purpose of tricking an audience presumed to be transphobic in to caring about the character before the reveal; to make the reveal more "jarring" and "clever" and "edgy". Standard bullshit in a slightly better crafted package than we are used to. This is just a dribble of "trannies are disturbing" on top of a giant scoop of "bitches is crazy".

Relevant: These Letters About Sexual Harassment From the 1970s Could Be About Trump Today 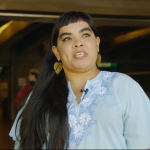 by Sarah Mirk
A new film project is recording people reading aloud letters sent to Ms. magazine in the 1970s. It's eerie, but not exactly surprising, how many sound like they could be written today.