Lizz Winstead is a prolific comedian. First off, she’s the co-creator and former head writer of The Daily Show. She left months before Jon Stewart became the host (but not before discovering Stephen Colbert) and went on to co-found Air America Radio and hosted the show Unfiltered with Chuck D and Rachel Maddow. In May 2012, she published a book of biographical essays, Lizz Free or Die, that chronicle her life growing up in a Catholic family in Minnesota, getting an abortion at age 17, becoming a stand-up comedian, and moving to New York to revolutionize the way Americans see the news.

Winstead is coming to Portland, Oregon this Saturday to speak at NARAL Pro-Choice Oregon’s Annual Choice Gala. She took time to talk with me over the phone on Monday about her history, Twitter fights, and how comedians have become the watchdogs of media.

HANNAH STROM: What does feminist comedy look like to you?

LIZZ WINSTEAD: I don’t know, I think to pigeonhole that is to say that there’s one voice of feminism. So I wouldn’t want to define feminist comedy as anything. If I could broad stroke it, I’d say it’s a woman standing up for her own truth, whatever that is. Even if she doesn’t necessarily identify as a feminist. I just think if a woman is taking the stage and talking about what’s important to her and her own personal power and asserting it by saying “I have an opinion, and it matters, and here it is.”

Do you think the comedy industry has changed for women from the time you started to now?

Yeah, definitely. I think that when I was doing it there was so few women even on the road doing standup that I was like, “Is there something that women are supposed to be on stage?” Because the ones I initially saw were Joan Rivers and Phyllis Diller and really older comics who were talking about their husbands and their body image, and I was like “That’s not my life at all.” I don’t have those experiences, so does that mean I can’t be on stage doing comedy? And I was introduced more to Sandra Bernhard and Roseanne and these people who had a wide swath of opinions and more cultural experiences like me I was like “Oh yes, I get it, you can do whatever you want.” And now I think the best thing that’s happened is that we are generationally at a place where women and men have started coming together and developed together so now men don’t look at women as women comedians they look at them as comedians. So it’s pretty great.

Speaking of sexism in the industry. What would you say to Kenan Thompson who recently claimed that no black women comics were “ready” for SNL?

Honestly to say things like that, and then to look at the landscape of really funny female comics who are out there doing improv: Abbi Crutchfield, Phoebe Robinson, Michelle Buteau, there’s just a million of them. I don’t even know what to say, when someone says that I feel like “Are you just trying to get page clicks?” Because it’s absurd.

You’re very active on Twitter. How has the rise of the Internet and social media affected news and activism for you?

For me it’s really great. I use Twitter as a writing tool as well as an information tool. I’ve got equal parts followers who are comedy fans and then politics fans. So if I can hit up people with a news story with a funny headline, I might get people who might not normally see that story engaged to click on it. I’m writing all day on Twitter trying out jokes, and then if I get 25 retweets or more in the first minute then I put it into a file and I try those jokes out on stage and develop them. So for me it is a way to engage people who might not necessarily care about politics and then keep people who follow politics a lot from not jumping off a bridge. Those are my two goals.

What’s your experience with hostility from an online audience? How do you deal with that?

Oh there’s so much hostility from the online audience. People are very mad when they see you making a point. If it’s horrible I’ll just Retweet the horrible thing that they say and write “you seem nice” or “you seem smart” and then they don’t know what to do. I would say 80 percent of the people who attack me on Twitter attack me personally—they don’t even try to have an argument with me about policy. They found a human homo erectus skull that was 1.8 million years old, and so you tweet that and somebody writes, “You believe that bullshit, God created the earth 6,000 years ago.” And I write, “How is that possible if the skull is 1.8 billion years old?” And they tweet back “whore.” And you’re like “Okay, I might be a whore but you’re still wrong.” You can think I’m a whore or a slut or whatever, but that doesn’t make you right. You haven’t made your point; you’ve just made your point that you’re a dick. And an incorrect one at that.

You’re a co-creator of The Daily Show as well as Air America. What do you see the relationship with news, comedy, and activism is?

You look at The Daily Show, or Colbert, or Bill Maher, or Lewis Black, or a lot of the other political comics in that realm including myself, not only are we talking about politicians and corporate greed we’re also talking about the media. We rely on the media to be the watchdog but now the comedians have become the watchdog of the media. It has become on some levels so incredibly dishonest, on some levels completely ignorant, on some levels just inept. With that going, it’s like “Holy moly,” it’s just crazy that we have an electorate that has any information. And the most accurate stuff they’re getting is from comedians. It’s a little frightening.

You’ve been very vocal about the issue of choice. For you, what’s the real issue here?

Where I like to put my personal investment and thought is that if a woman does not have control of the decisions that she makes about her body, she will not ever be able to be in charge and have a seat at the table. In the narrative that we have been living in, we have been tiptoeing and playing by the rules that the anti-choice movement has set up for us. We talk about women who have had elective abortions because they aren’t ready to have children in a way that makes them feel guilty that they haven’t had the “right” kind of abortion. We really emphasize, “At least we should protect the life of the women,” but we say life of the mother, and you know what if you don’t want to have a child you’re not a mother. It’s not a child. When we don’t use the word abortion then the right wins the narrative of “See, they say pro-choice and they say all these euphemisms because they don’t want to talk about abortion because they know that it’s toxic.” So I want to remove the stigma around abortion, and I want any woman to feel that whatever reason she needs to terminate a pregnancy than that reason is valid and honored and she shouldn’t be identified or defined because of it.

You had an abortion at age 17. How did your personal experience affect your political activism?

I knew from a very young age that I was someone who just did not want children. I never had a connection with them, I didn’t like dolls, and I just found myself always being incredibly busy and focused on bigger issue stuff. I found myself young and vulnerable and pregnant at a crisis pregnancy center, with people shaming me and guilting me and lying to me about being pregnant–they were so invested in a world that they wanted women to live in, and they were not invested at all in whether or not I would be a good mother. For someone pushing on me something that I would be terrible at was such an indication that that person was not invested in helping me or any woman make the world a better place. So I just realized from that point forward that I want every woman to pursue her best self and her dreams.

What do you think of the parental consent and notification laws in states like Nebraska?

I think they’re awful. Sex is fun, and it’s free. People are gonna do it. Because our sexual selves oftentimes develop before our common sense selves do, if someone happens to get pregnant and doesn’t want to have a child, why should we force them to make a decision where their entire life changes? Children aren’t property or parents. I don’t understand it.

It’s been said that if men were the ones who got pregnant, abortion would be more accessible. What do you think?

I think that if men could get pregnant, abortion would be free and in the Constitution.

This article is cross-posted at NARAL Pro-Choice Oregon.

Relevant: The Laws Are Struck Down, but the Tragic Impact of Texas's Abortion Laws Remain 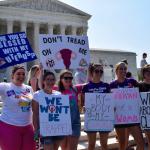 by Sarah Mirk
Think of the people who've suffered over the past three years as clinics have shuttered.