NYC Hands Out 35 Million Condoms a Year, Then Arrests (Certain) People for Having Them | Bitch Media

NYC Hands Out 35 Million Condoms a Year, Then Arrests (Certain) People for Having Them 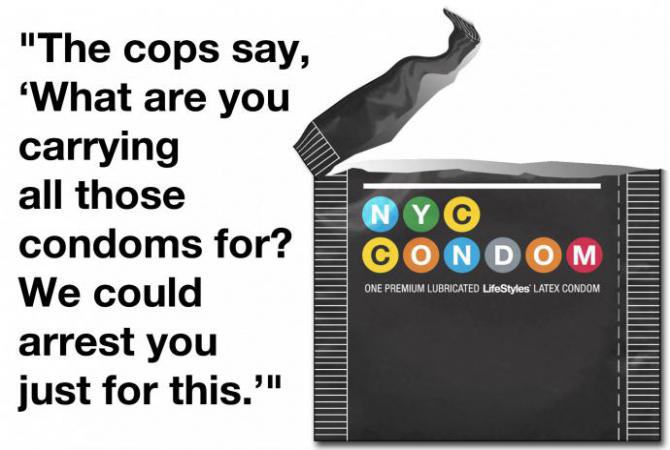 It makes sense for public health departments to invest in distributing free condoms. But why would a city spend a million dollars a giving out free condoms—then allow police to use those very same condoms as evidence of prostitution? This may sound ridiculous, but this has been the reality in New York City.

For decades, New York police has arrested people for prostitution and use any condoms the person has as part of the justification for their arrest. In a typical 2011 police report documented by Human Rights Watch, for example, an officer arresting someone on suspicion of “loitering for the purpose of engaging in a prostitution offense” described what the person was wearing, the money they had in their pocket ($1.25) and “sexual paraphernalia, namely: One condom.”

New York is one of four major U.S. cities in which police and prosecutors can use condoms as evidence of prostitution. The other three are Washington, DC, Los Angeles, and San Francisco. In 1994, San Francisco prosecutors ceased using condoms as evidence although police still use them to justify arrests. New York’s infamous Stop and Frisk policy allows police to stop and search anyone they deem suspicious. Although the practice is purportedly color-blind, the police overwhelmingly target young people of color, including women and trans people of color.

“We have heard countless stories of LGBTQ and HIV affected survivors being profiled by the NYPD where condoms were used as evidence against them,” said Sharon Stapel, the executive director of the New York City Anti-Violence Project, this week in a press release on the police’s revised policy.  “The only policy that will truly reduce harassment and allow people to safely carry condoms without fear of arrest is one that does not allow condoms to be confiscated by the NYPD in the first place.” As it is, the policy leads some LGBT people and sex workers to be afraid to carry condoms. 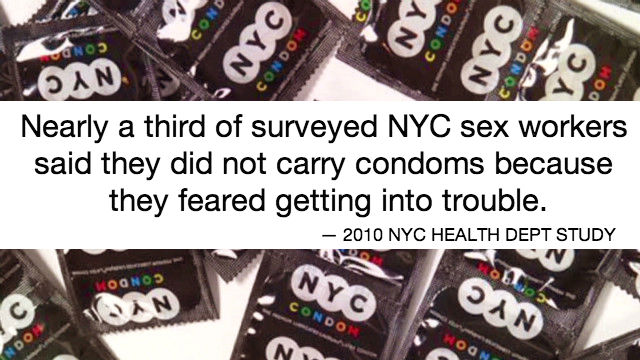 A 2010 study by the city’s Department of Health surveyed more than 60 sex workers and found that more than half had condoms confiscated by police. Nearly a third said they had at times not carried condoms because they feared getting into trouble.

The New York Police Department makes approximately 2500 prostitution-related arrests per year. The majority never go to trial. The district attorneys’ offices of Manhattan, Brooklyn, and Nassau County discontinued using condoms in their prosecution last year, but police still use them to justify arresting people. Prosecutors in other New York counties routinely refer to the number of condoms a person had on them in criminal court complaints accusing them of engaging in prostitution-related offenses such as “loitering for the purposes of prostitution.”

Community health outreach workers have also noted that the policy of confiscating condoms has led to sex workers and others at risk for being stopped taking fewer condoms. A report by Human Right Watch quotes one outreach worker’s recollection of handing out condoms in Manhattan’s Tompkins Square Park, a frequent gathering point for teen runaways and street people:

“I was handing out condoms in Tompkins Square Park. One lady came up and took two condoms. I said ‘You can take more’ but she said ‘No, they’ll arrest me.’ She was scared to take them… she might have been 18 [years old].”

Many of the other 300 people interviewed for that Human Rights Watch report said they had been hassled by police for carrying condoms. A Brooklyn sex worker named Pam told interviewers:

“The cops say, ‘What are you carrying all those condoms for? We could arrest you just for this.’ They use it to push the issue of searching me. It happens all the time around here. I may be carrying eight condoms. If you have more than three or four on you, they will take them, they will be disrespectful.”

“The revamped condom policy is a step in the right direction,” Andrea Ritchie, a coordinator at Streetwise and Safe (a New York City-based group that has long opposed the department’s previous policy) told reporters, but it creates a loophole big enough to drive a truck through. “We will be monitoring the NYPD carefully to see how they implement this policy,” says Ritchie. Under the amended policy, police can (and will) continue to use the possession of condoms to justify arrest and confiscate condoms as “investigatory evidence.” Advocates also point out that the policy continues to put sex workers at risk, as the police could target people that they suspect of being sex workers or teen runaways under the guise of investigating pimps and traffickers. Plus, it leaves sex workers open to being punished by pimps and traffickers, who don’t want them to carry condoms because they fear the contraceptives could be used against them.

It should also be noted that New York City actively distributed over 35 million free condoms last year to reduce the spread of sexually-transmitted diseases and unwanted pregnancies. Free condoms, with an NYC logo on the packet, are available not only in health clinics, but also in public places such as schools, bookstores, bars and community centers. That policy seems like it’s at odds with even the new-and-improved approach to condoms.

Relevant: Ask Bear: How Do I Get My Sexist Boss to Apologize?

by S. Bear Bergman
How do you tell someone HOW to apologize for screwing up?