Back in 1996, Andi Zeisler and Lisa Jervis were looking for a place to air their love/hate relationship with pop culture, a place to offer in-depth feminist analyses of the television shows, marketing campaigns, and other pop culture messages and products of the time. No outlet existed, so they took the matter into their own hands... and Bitch was born.

Now, almost 13 years later, Bitch has covered everything from the cultural response to rape and sexual abuse to the portrayal of transwomen in the media, from gender bias in science reporting to chest hair as a representation of masculinity. And in the process, it's evolved from a photocopied, paste-up, 16-page zine to a 96-page, internationally-distributed magazine, behind which is a nonprofit operation that's hard at work to bring you additional projects like this very website.

And in the midst of growing and evolving Bitch, Andi has just released a book, Feminism and Pop Culture (Seal Studies), which traces the impact of feminism on pop culture -- and vice versa -- from the 1940s and beyond. If you love Bitch, you'll love the book, which highlights Andi's signature style of rigorous and humorous reflections on pop culture.

Please join me in congratulating Andi and please support her commitment to feminist media analysis by buying a copy at your local independent bookstore -- or through Powell's. Thanks to the tireless work of feminist pop culture critics like her, pop culture analysis has evolved from being seen as mere fluff journalism to a field of scholarly study -- not a small feat, but an important one considering the extent to which pop culture shapes the world around us.

Hey! I bought it a few weeks ago! I haven't had a chance to read it yet, but it's on my list.

Arrived last week. :) Can't wait to read it myself. There are about three other books in the <a href="http://www.sealpress.com">Seal Studies Series</a> that are worth checking out, too. 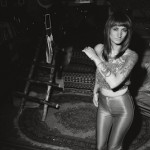