A Long Island Wal-Mart worker was trampled to death this morning as over 2,000 shoppers pushed and shoved their way through the doors at 4:55 a.m., five minutes before the doors were set to open.

The New York Times reports that people didn't stop to help Jdimypai Damour, 34, who had been waiting with other employees in Wal-Mart's entryway, nor did they stop running through the store after medics arrived. According to officials, even as they tried to perform CPR, hundreds of people continued to stampede through the store.

wow, just goes to show how much people really do suck.

that is so ridiculous! but it does show the materialism that's plaguing society today.

Wow, that is insane. People always joke about sales like that and someone(usually old ladies) getting trampled... I never thought individuals could actually be <b>that</b> cold hearted.

If I were one of those fucked up people, I'd never be able to watch my stupid tv again knowing someone had died just so I could get a deal. Shame on all of them. 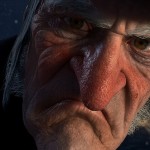 by Shannon Weber
Donald Trump hasn’t grappled with the messages of any ghosts.