The classic image of a cowboy is of a wandering man. Symbolically, the American Cowboy has come to represent large, abstract values: freedom, honesty, bravery. In these stories, cowboys meander and conquer the open range alone with their trusty steeds.

But how do women fit into these pervasive stories of troubled, wandering heroes? Let’s take a look at three western films: Shane (1953), Unforgiven (1992) and True Grit (2010).

The women in many classic Western films are rooted to one place: their home. Often in cowboy films, we see women either victimized or punished for venturing out as the cowboys do, serving as a warning to women.

We see the role of women at home very clearly in Jack Shaefer’s 1953 classic Shane (at right). The title cowboy stays at the house of a homesteading family whose matriarch Marian Starett is firmly grounded in the domestic sphere. While the men, particularly Shane, are out protecting the ranch from cattle rustlin’ men, Starett is the one being fought for, not the one doing the fighting. She is not the one wandering—she is the one left behind at home when Shane inevitably sets out for the road again.

Clint Eastwood’s 1992 Best Picture winner Unforgiven shows what happens when women venture outside the home. In Unforgiven, Eastwood plays troubled cowboy anti-hero William Munny, who has no women in his life, his wife is dead and the brutal assault of a prostitute in a distant town serves as the impetus for Munny to begin his quest for redemption and justice. The depiction of the sex workers coming together to demand justice does seem important, but it is not met without constant challenges and very clear danger.

Even Mattie Ross in True Grit (at right), though a a remarkable character by Hollywood standards, finds herself punished for leaving the safety of home and family to avenge her father’s death. Ross is plucky; she is confident as she travels to a different town and settles her father’s affairs before embarking on her own journey. Just as with our cowboy heroes and anti-heroes, Ross is functioning according to her own brand of justice. With the help of a Marshal and a Texas Ranger, young Ross sets out toward the traditionally masculine sphere of tracking, riding, and shooting. Now, it’s important to note when examining where women fit within these narratives that in both the novel and film versions of True Grit, Ross is unable to execute justice without the help of men. While she is certainly independent, Ross would never have found the killer without the help of her male companions. And the men are quick to remind her of this, establishing their dominance. Though she’s adventuresome, her age, size, and position within society bar Ross from the freedoms and advantages of cowboys—physically and politically—that are needed to track and kill the man who killed her father. She wears her father’s clothes and performs masculinity, consistently being forced to prove that she can handle the long and dangerous trek on the men’s terms.

In one particularly problematic scene, we see her physically infantilized and humiliated by being ripped from the back of her horse and spanked after chasing the men when they try to leave without her. While the men acknowledge that she got the best of them in following behind, it is still clear that they are in charge. She is punished for ignoring their orders and venturing out with the men. This becomes more tragically clear at the end of the story when, after finding her father’s killer and shooting him—finally getting vengeance, performing violence as a man would, as cowboy anti-heroes do—the kick of the shotgun throws her back into a pit of snakes. Inside, she is bitten and as a result, needs to have her hand amputated, a tragic punishment for a girl acting outside of traditional gender constructions.

Within cowgirl stories, the horse acts as an equalizer. Women are powerful by proxy when a horse is involved. They are strong and fast and free. They are able to do the same things as the men on their horses. Mattie Ross caught up with the men thanks to her quick horse and the men readily acknowledge this. While it is troublesome that women need a horse to practice the same agency as men in these stories, there is something significant about portrayals of complex women succeeding and coming out on top, especially when considered alongside their hyper-masculine counterparts.

There seems to be some trouble with the text in the part about True Grit.
Interesting article though!

I'm pretty confused by this. Shane is emphatically not a cowboy. Eastwood's character in Unforgiven is a pig farmer, and the lead males in True Grit are a US Marshall and a Texas Ranger. No cowboys at all in this mix. Maybe just a poor title choice?

I would have much rather heard about whether these female characters are accurate representations of women's roles in the settling of the American West (and yeah, they kind of are, whether our 21st century sensibilities are injured or not). You should watch Heartland (1979). The main female character (played by an amazing Conchata Farrell) stays at home for sure, but that's where all the frickin' work is when you are a pioneer. She manages to display grit and heartache and to epitomize the "freedom, honesty, and bravery" of the American West, all while doing the laundry and cooking the potatoes.

That's a really good point. They aren't necessarily straight-forward cowboys, but they do represent masculinity featured in Westerns (and what I would consider "cowboy narratives"), counterparts to cowgirl narratives featuring strong female leads. Sounds like Heartland would be a great addition to that discussion now that the context of Westerns and masculinity has been addressed and I am moving into the stories of these women who played real-life and fictional roles on the range--the stories I'm really interested in. Thanks for the suggestion.

It is worth noting that there is some religious subtext to the True Grit story. Mattie lets vengeance fill her heart, and as a result goes to a metaphor for Hell: a place beneath the surface with snakes (devils), but she is pulled out of the pit by her friend, and her sinful hand is cut off (see Matthew 5:30), and then she is reborn in a purer state. She was sinful when acting like the men (who don't have similar religious journeys and are just fine in their roles), and when she is reborn, she conforms to the standards of femininity to an extent by staying domestic, if unmarried. 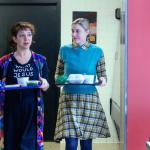