Note: As part of my sports blogging, I'll profile athletes of all ages. Catch my piece on Majka Burhardt, a
professional climber who ascends peaks around the world, here, and on Carly Welch, a thirteen-year-old ball player cautioned to "take it down a notch" lest she hurt people, here. 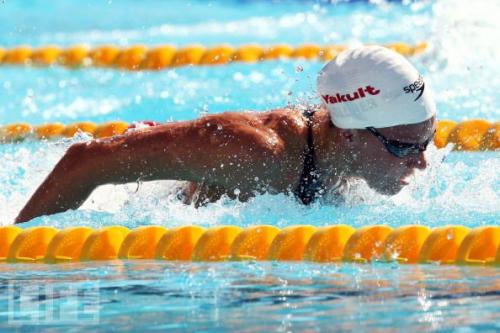 Where to even begin with Dana Vollmer? Not only is she one of the best swimmers in the world, she's been in the elite ranks since she was a pre-teen. That's right: Vollmer was 12 (!) when she competed in the 2000 U.S. Olympic Trials. The Texas native failed to make the team that year but, as usual, she moved fast: she won a gold medal at the 2004 Olympics as part of the 4x200 freestyle relay team that broke a world record that had stood for seventeen years.

It is not, however, all smooth sailing (smooth swimming?) for Vollmer. In 2003--the year before she would win her gold medal--Vollmer had heart surgery for a medical condition that nearly kept her out of the pool for good. It is serious and requires constant attentiveness. 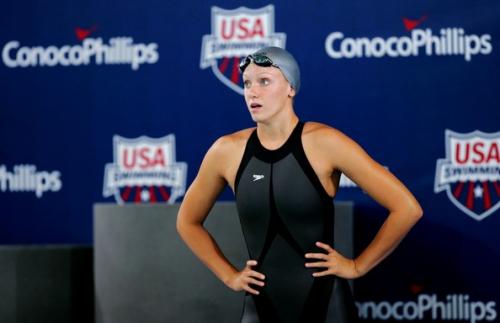 Still, Vollmer is at the top of her sport. She scored a new American record at 1:41.53 in the 200-yard freestyle swim last February. As a collegiate athlete, swimming for the University of California, Berkeley, Vollmer collected an almost embarrassing number of honors: she was named the 2009 NCAA Swimmer of the Year, Pac-10 Swimmer of the Year, and the winner of the Honda Sports Award for swimming. As well, she was nominated for the 2009 ESPY Award for Best Female Collegiate Athlete. Vollmer won four national titles and played a key role in taking Cal to its first NCAA championship. Beyond college, Vollmer is pursuing her career as a pro swimmer. Just this month, in fact, she 'steamrolled through U.S. Masters record books, setting six marks in less than two hours.'

How did you come to be a swimmer?
I have basically been swimming my entire life. My mom taught me to swim, and had me in a backpack on the pool deck as she coached before I could even speak. Basically, I have loved swimming since I was little bitty, and swam on a summer league till I was 11 and played many other sports simultaneously such as gymnastics, soccer, and basketball. 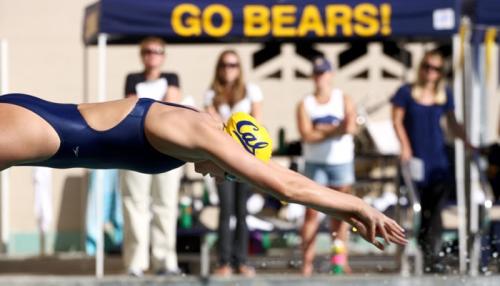 What do you love about your sport?
I love that swimming can be a team sport, but is largely individual. I can push myself to my limits every day and know that when it comes down to it, my performance is all up to me. I love that the team is there to push each other and to be a second family, and that we all have the same individual goal to get better.

What do you think are the biggest misconceptions about your sport?
I believe that the biggest misconception in swimming is that the more yardage you do, the better swimmer you will be. There is only so much yardage that a person can do, and if that is all you rely on to get better, there is a point where you just can't add any more. I have seen the biggest strides in my career happen when I was perfecting the little things, like starts, turns, and technique. 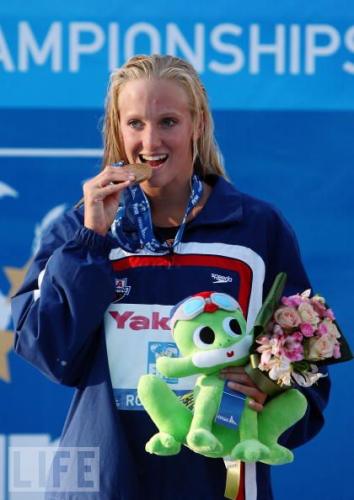 Throughout your teens--and even before--you competed on such a high level. What was it like for you to being growing up in the world of professional swimming?
It's difficult but fun. I gave up a lot for my sport, home-schooled two years of high school, traveled fifty minutes one way to practice twice a day, but let me tell you, it was worth it. Elite level swimmers train around five-six hours a day, or as I like to say, we are training all days, just in different forms. It turned into a lifestyle, but as a teen, it was hard when I couldn't go to the movies late at night. Sometimes your friends stop asking because the answer was always the same: "Sorry I cant because I have practice". But the friends who really supported me and understood are the friends that I still have today!

Several years ago, you had heart surgery. What happened? How has it affected you, both personally and as an athlete?
I was diagnosed with symptoms of Long QT Syndrome. Basically, it's the resting period between heartbeats, and mine would randomly take longer than it should. It is believed to be one of the reasons for sudden death in athletes. If you are diagnosed with the syndrome, it is advised that you no longer participate in athletics. As a 14 year old, this was devastating to hear. However, since I was only diagnosed with symptoms of the syndrome, doctors allowed me to continue to train as long as a defibrillator was near. As a young girl, I was pretty superstitious so I actually never touched the thing. In 2004 when I made the Olympic team, the staff had to carry it around for me.

Some people thought I was crazy and should take responsibility for my diagnosis, but as a sixteen year old, this was the way I handled it. I truly believe that when I heard (the news that) I may never be able to swim again, that lit a spark in my heart that I LOVED to swim and wanted to be the very best. I had a new appreciation everyday, every practice I was thankful that I could be in the water training. 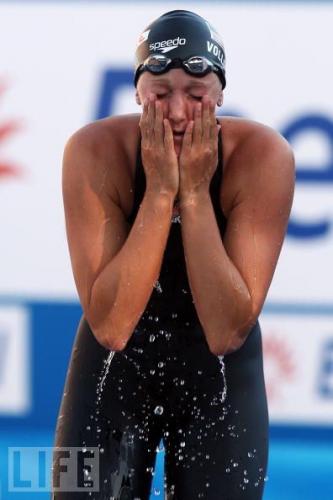 What are your goals right now?
Right now I am focused on the 2012 Olympic team. Winning gold in 2004, followed by missing the 2008 team by 3 hundredths of a second, and then being able to come back and qualify for five events at the 2009 World Championships, I am ready to continue training and (to) be the best in my events!!

I am going through the process now of becoming a professional swimmer. I just recently signed with Wasserman Group to represent me as my agency, and now looking to build up my image to represent what I stand for. The heart condition has put me in a unique situation, and I have been passionate about talking with kids and families going through the same tragic experience.

Are you a sports fan? Who do you cheer for?
I am a big Dallas Mavs fan! Being from North Texas I am very proud to support Texas teams, but the Mavs in particular! My best friend through high school and still today lives for basketball and played for college teams in Texas; it seems he never missed a game and always kept me informed. We got to go to a game once in Dallas, and I would love to go again!

First image: Vollmer, fierce in the pool; via Getty Images.

Third image: Vollmer diving into the pool. She was named the
NCAA Swimmer of the Year at the NCAA Championships. Vollmer won the
100- and 200-yard freestyle events and swam in the winning 400-free relay; via the Daily Cal.

Fourth image: Vollmer taking a bite out of her bronze medal during the medal ceremony for the Women's 200m Freestyle Final during
the 13th FINA World Championships at the Stadio del Nuoto on July 29,
2009 in Rome, Italy; via Getty Images.

Fifth image: Vollmer splashing water on her face at the 13th FINA World Championships at the Stadio del Nuoto on July 29, 2009 in Rome, Italy; via Getty Images.

Thanks you so much for writing doing this interview! I am a collegiate swimmer myself and was so excited to stumble across this article. Swimmers, especially women swimmers, hardly get any media attention in relationship to the life time of work they put into training. Thanks for finally highlighting the sport I love! 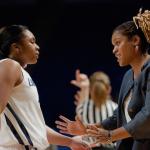 by Sarah Mirk
A new investigation reveals how NCAA schools discriminate against women in athletics.