Something just occurred to me, on this, the holiest of political days. You know how Barack Obama bought, like, I dunno, a gazillion dollars worth of TV time to run his infomercial a few days before the election?

Whether or not his little bit of soft-serve propaganda served to sway any undecided voters is arguable, but at least the maneuver effectively cock-blocked John McCain from running his hideously angry, ugly anti-Obama ads.

You know why Obama was able to buy up huge amounts of major affiliate prime-time? Because in the '80s, the TV industry was freed up by deregulation. You young'uns out there might not know this, but once upon a time, infomercials were by law restricted to certain times of day--late, late night, actually; their airing during prime time or daytime was illegal. But one man came along and changed all that, a visionary who opened us up to the 24-7 world of cheap juicers and rip-off real estate programs. Until then, we didn't even know what we were missing!

Eventually, this freedom of the airwaves led to its logical conclusion: Obama's bought himself a full hour biopic to promote his personal history, his programs, his ideas. According to Reuters, 33.5 million people watched the thing, 60 minutes of freedom for Obama to look presidential and smooth, as opposed to the only images we saw of McCain, which consisted mainly of media-chosen, 10-second-long video of him staggering awkwardly about various stump stages, rambling about socialism.

The tasty irony is this: The one man who got the TV deregulatory ball rolling, who opened up the airwaves in the name of the Republican fantasy of an unfettered free market? Ronald Reagan.

The circle is complete.

It didn't help that the deeply hypocritical Clinton Administration renewed/accelerated that deregulation back in the mid-'90s. A few more of you might remember that.

That's one of among many reasons why I voted for either Nader or McKinney yesterday (again, I prefer not to divulge my exact choice). At least my voice was counted and heard on my near and dear causes of less corporate influences and consumerism in our culture. Suffice it to say, I have already had nightmares of Obama (with Oprah's help, no doubt) telling us to "shop 'til we drop" to get our economy rolling again, just like Bush did after 9-11. However, I am hopeful that one day Nader's, McKinney's and others' tenacious messages of a more sustainable, more diverse, less corporate-influenced world becomes reality. And a democratic media that is about REAL, truly inclusive fairness becomes OURS again.

This post on Racialicious beautifully explains why I am thrilled at Obama's win and why I didn't vote Green or independent. And also why I don't give flying fig about what happens on Gossip Girl on a day like today. http://www.racialicious.com/2008/11/05/good-and-now-back-to-work-avoidin...

I'm not sure Obama would be the guy to, as you put it, "tell us to shop til we drop" in order to boost the economy. Through-out his political campaign Barack Obama has offered us common sense solutions to our every day problems. For example, when faced with high gas prices Obama suggested we keep our tires properly inflated in order to increase our gallons of gas per mile. When faced with the breakdown black families in the inner city and the public education's inability to solve all those problems he suggested that we start our children on a nightly reading program at an early age. He said that doing the simple things has a long lasting impact. That is what's called common sense with a side of Harvard education.

Michelle Obama was wearing $10,000 earrings (as quoted by the earring designer), and a designer dress worth maybe 5 to 8 thousand on election night. Shop till you drop ...with a side of Harvard education?

Here is a link to a very respected FCC lawyer's posting on the infomercial - http://www.broadcastlawblog.com/archives/political-broadcasting-obama-bu...

I cannot find any evidence that deregulation had anything to do with the current informercial. Again, what is your back-up for this assertion? In fact as the link says "[this was] a right that was affirmed by the US Court of Appeals when the networks did not want to sell Jimmy Carter a program length commercial to announce the launch of his reelection bid." Just because this is a blog does not mean it should not be held to the same journalist standards of the magazine.

<p>I'm a bit confused myself, since Carter came before Reagan. </p><p>Here are a few articles to back up my statements:

</p><p>The following is from a Forbes article, dated November 2002:
&quot;Infomercials have been around in one form or another since the beginning of television. But the modern industry got its start in 1984 when the Reagan Administration deregulated the airwaves and renounced rules limiting the number of commercial minutes that could be broadcast in a given hour. With the change in policy, coupled by the growth of cable television, infomercials took off.&quot;
</p><p>You can read the whole article <a href="http://www.forbes.com/2002/11/11/cx_da_1111infomercial.html " title="http://www.forbes.com/2002/11/11/cx_da_1111infomercial.html ">here</a>: </p><p>A 1995 NY Times article about the Psychic Friends informercial states:
&quot;Since television deregulation in 1984 opened the way for half-hour advertising, the infomercial business has exploded into a $1-billion-a-year industry, and Mr. Lasky makes no apologies for riding that wave. It is a 'marriage of high tech and New Age,' said his senior vice president, Robert Hoffman.&quot;
</p><p>You can read the whole article <a href="http://query.nytimes.com/gst/fullpage.html?res=9E0DEED61E39F934A35751C1A... title="http://query.nytimes.com/gst/fullpage.html?res=9E0DEED61E39F934A35751C1A...   </p><p>&nbsp;</p>

David Oxenford clearly states that pres candidates have been allowed program length time on major networks well before deregulation. Your articles did not disprove this fact.

Commercial advertisers and politicians have completely different rules and you are trying to say they are the same with your two references since they do not mention political advertising and how it relatesa to the deregulation you wrote about. Again I sent you the opinion of a well respected fcc lawyer, I think you should have read it before you replied to understand the Carter reference.

How does the legal opinion of a 25 year veteran of broadcast law, David Oxenford, that directly addressed the FCC legal issues involved with Obama’s half hour, primetime network event (here is that link again <http://www.broadcastlawblog.com/archives/political-broadcasting-obama-bu... ) supposedly gets trumped by two articles that do not even mention political advertising? Indeed your Forbes link specifically states “the Reagan Administration deregulated the airwaves and renounced rules limiting the number of commercial minutes that could be broadcast in a given hour” – since comment remarks cannot highlight words I would like to emphasize that it stated "commercial minutes," not political minutes. I am assuming it is a given you would agree that Obama's half hour on primetime networks would be considered political minutes and therefore do not pertain to the "commerical minute" regulations your source sites.

Again, how can you back-up your article, especially with two sources that do not cover political advertising?

"Half-hour commercials were far more common during the early days of television.
John F. Kennedy presented a half-hour commercial that featured parts of his speech in Houston about his religion. Richard M. Nixon bought two hours of time on election eve in 1968, at a cost of $400,000. The outsider candidate Lyndon H. LaRouche Jr. ran a half-hour prime time telecast on CBS in 1984, using the program to call the Democratic nominee, Walter F. Mondale, “an agent of influence” of the Soviet intelligence services. (Federal communications rules prohibit networks from censoring the content of candidates’ advertisements.)
The last candidate to use the format was Ross Perot, in 1992, when he used the time to detail his plan to cut the deficit before an audience of 16.5 million people."

When I first read Jonanna Widner's article "De-regular Man" (and then subsequent back-up) I was shocked that she was writing about political advertising while only referencing something that did not pertain to her arguement - Reagan's deregulation. Had some simple research been done on the actual topic of political advertising it would have easily shown that there is a history of program length political advertisements well before the 80s. I have also shown that the courts have in fact validated candidates rights to do so at the Appeals Courts level in a case involving President Carter.

I am still mystified by how this article got published when its arguement as to why Obama was allowed to air on a primetime thirty minute spot was not backed-up by any pertinate information. How and why did this happen?

Relevant: The Latest Investigation of Planned Parenthood Shows It Did Absolutely Nothing Illegal 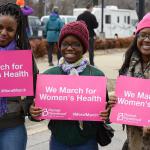 by Sarah Mirk
The "unfounded" allegations seek to discredit the organization and divert resources away from patient services, says Washington's attorney general.