Governor Rick Perry has demanded a second special Texas legislative session on July 1 just to take a vote on bill SB5 that would shutter most of the state’s abortion clinics.

That’s ridiculous. Wasting public money on a special vote just to women’s restrict reproductive rights is unproductive and downright offensive. Senator Wendy Davis and hundreds of protesters fought the bill so hard this week because it is NOT concerned with women’s health—they are concerned with controllling women.  Like many Americans, we’re Pissed at Perry. If Governor Perry and politicians nationwide actually wanted to support the lives and choices of women, why have 49 states passed measures that restrict our rights rather than actually preventing unwanted pregnancies?

Instead of criminalizing abortion, politicians should push for funding comprehensive sex education in schools and making birth control affordable for all women. Those are two smart policies Texas Representative Senfronia Thompson tried to add to Texas’ bill, but Republicans shot them down.

What policies should Rick Perry and politicians in every state support to improve the lives of women?

Send Perry an email with your ideas here! 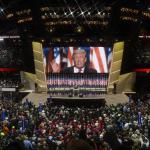 by Tasha Fierce
Trump’s nomination is the result of decades of race-baiting by the GOP.