Declare Your Independence: Bitch, The Magazine

As many of you Internet fans know, I’m the web editor here at Bitch Media, which means I concern myself mainly with what goes on in this series of tubes we’re working in right now. However, today I’d like to talk about Bitch: Feminist Response to Pop Culture, the best print magazine in the whole world. (OK, I’m biased, but it is seriously awesome.)

I first came across Bitch years ago, when I was knee-high to a feminist grasshopper, in a bookstore at the mall. In fact—and I may be dating myself here—the first issue I purchased was the one on masculinity that you see pictured above (look for the urinal). I’ve never been so psyched to pick up a magazine. Finally, I had found my people! And they were hilarious and cool and liked sitcoms and pop music, and they were feminists and weren’t afraid to admit it! Refreshing, to say the least.

Now, if you’ve encountered Bitch Media mainly through the web, you’ll be pleasantly surprised to know that our print content is different than the content you find here. Every issue (they’re quarterly) is full of columns, features, and interviews—all of which tend to be delightfully wordy—as well as shorter, snarky pieces of media response and analysis. We also feature book and music reviews, a section called Love It/Shove It that offers short rants and raves, and an ongoing feature called the Bitch List that highlights cool media and pop-culture products/projects. Oh, and we have comics!

In a world where print publications are dying on the vine, Bitch is still going strong—providing a fresh, feminist, response to pop culture in much-needed print form. Sure, the Internet is convenient and all, but you can’t hold a blog post in your hands or archive it on your bookshelf, now can you? You can’t make a collage out of it or store it on the magazine rack in your bathroom. But you CAN get a subscription or renew your existing subscription to the magazine for the limited-time price of $19.96!

Let’s face it: Independent feminist media costs money to produce, in any form. If you value the content you read here, please subscribe and support Bitch. If you already subscribe, consider convincing a friend or two to do the same. Declare your independence by subscribing (or renewing your subscription) to the magazine that’s been bringing it to you since 1996, for just $19.96! Plus, every 50th subscriber gets a prize!

If you’ve got a story about the first time (or the 100th time) you picked up an issue of Bitch, please share it in the comments section!

I think the first issue I read was maybe winter 2004, also at a big corporate bookstore in a mall! Bitch sincerely changed my life! I totally agree that it's the best magazine ever, although as the new media intern I am also biased!

I found my first issue of Bitch under the cushions of a friend's couch I was sleeping on during that living-in-my-car phase we all go through in high school. Do I even need to say that it changed my life? Doesn't everybody already know that Bitch changes the lives (or at least perspectives) of all of its readers? Bitch has always given words to the feelings that I couldn't figure out how to talk about. Nutshell: I fucking love this magazine, and I hope it's still around for my daughter to read when she gets older.

I first saw it at the Daily Planet, formerly my local newsstand when I lived in Hollywood. (I miss you Daily Planet!) I don't know when I would have seen it, if Bitch weren't on the newsstand, but now I know that subscribing is the best way to financially support my favorite magazine.

The first issue I ever picked up was "Taste and Appetite". I must have been... around sixteen? And wasn't calling myself a feminist, but had so luckily never really associated the word with negativity, either (my childhood idol Lisa Simpson, after all, was definitely a feminist). But I just liked the cover, and I picked it up and was so blown away in seconds that I knew I had to buy it, as sneakily as possible so my dad wouldn't see what I was reading and embarrass me. Looking back, it was like life finally made sense: oh, a feminist! THAT'S what I am!

I also passed that issue, and future ones, around at summer camp every year. When I was a counselor someone ripped a sex toy ad off the back cover and displayed it proudly on the staff fridge.

I love your story. And I'm also super jealous that you started reading Bitch when you were 16. Bitch could have saved me at 16!

Me too. The first print issue I picked up was, um, "Art/See," two issues back, and since then I've tried not to dwell too much on imagined alternate lives that might have resulted if I had started reading when I was 16...

Many thanks to the stellar Eugene Public Library for being my intro to Bitch. I worked nearby, so it was common for me to spend my lunch hour at the library, reading magazines that I couldn't afford to subscribe to myself. One day I had read through my usuals and was browsing for something new and exciting.

Why not? I was hooked and pulled a subscription card out of the back of the magazine.

Okay, you convinced me. I'm gonna subscribe!
I read bitch for the first time at my super cool feminist aunt's house two years ago right after I graduated from high school. I didn't really know much about feminism or anything then, and now I'm majoring in women's studies at college!

I first discovered the magazine when I was a freshman at Lewis and Clark College in Portland, OR back in 1998. I had been identifying as a feminist for about 4 years then, ever since I discovered Riot Grrl music in 1994, but couldn't find any magazines that I could really identify with that were for women. I tried to read mags like Cosmopolitan and Glamour but couldn't relate to them at all and found them to also be pretty anti-feminist. Bitch was like a breathe of fresh air for me when I discovered it, and I have been a loyal reader ever since. I've always enjoyed the fact that the magazine has published many contrasting views on what feminism is over the years, instead of trying to pinpoint it down to one way of thinking or point of view. There have been writers I have agreed with and writers I have disagreed with, and I like how that gets me to think about my own point of view on the issues discussed.

Bitch moved to Portland not too long before I moved back there (I had moved back to Chicago, where I am originally from, after that year at Lewis and Clark, and moved back to Portland in '08), and I was excited to be in the same city as my favorite mag, and to have a chance to volunteer there. I helped start the Community Lending Library, and also helped out at some events. I like how Bitch has gotten involved with the local community here in Portland, and I hope that they continue to thrive as a magazine and as a member of the community for many more years.

I know that the first I ever heard about and paged through issues of <i>Bitch</i>, though I'm not sure which issues they were, was in autumn of 2004. I was taking a Feminism in Literature and Popular Culture freshman seminar, and yes, it was as awesome as it sounds. The first copy I actually bought, though, was Singular+Plural in 2007. (I'm embarrassed to admit it took me that long.) I had recently come out as queer and, while I had considered myself a feminist for many years, was newly hyper-aware of how heterocentric and woman-unfriendly the dominant culture really was. I felt starved for an environment -- and a life! -- where feminism wasn't, at the very best, a casual side note. I've purchased every issue since, to say nothing of how intrinsic this web site has become to my daily life.

By the way, at the risk of outing myself as a geek (because that is <i>totes a secret, lulz</i>) your new "independence" header is gorgeous. I want to bottle up that pink-red and keep it in my pocket.

Too funny--that masculinity issue was the first one I ever picked up in a bookstore, too! It was love at first sight and I used an article in that issue for a graduate paper on Applied Literary Theories about the film, Sideways. It is an excellent magazine and I purchase it regularly! I have recommended it to many friends who now buy it as well. I also recommend BitchFest, which is a book of some of the mag's best articles over the years.

In the fall of 1998, I moved to Ottawa from Montreal for an internship with the Canadian government. Back in those days, I was already a reader of the magazine Bust. One day, I went to a magazine/tobacco store called Fags and Mags (seriously), looking for Bust. It was sold out, but at the spot indicated by the store clerk there was a copy of Bitch issue 8 (the Orange Issue). After perusing it a bit, I bought it and it was love at first read. I have every single issue published ever since, including the Bitch book.

Hopefully, I will be able to continue enjoying Bitch for many more dozen years! :D

I was 16 and had been looking for just the right prom dress to match my surly attitude. I stopped by a bookstore on the way out of the mall and saw it - "BITCH." I promptly purchased it and took it back to the hotel my family was staying it while we were in the big city that weekend (no WAY could you find something like Bitch in my small town) and spent the next few hours engrossed.

Well, um, my first encounter with Bitch magazine will be...in a few weeks! I've been an avid BitchMedia reader for a while, and i just finally buckled and subscribed yesterday. So excited!
But if first encounter with Bitch can also mean the online content, then i can definitely relate to the life-changing stories. It really made me look at everything in a different way- i'd had a theoretical understanding of feminism, in a booksmart kind of way, but i had yet to plug it into real life. Does that make sense? Anyway, Bitch kind of opened my eyes, i guess you could say. ;)

I first found Bitch last year when I was working at the Arts Center on my campus. My boss, a cis male feminist, had subscribed to it and put it in the green room. One day during break, I heard a couple of the sound guys talking about how surprised they were that James would subscribe to the publication. My interest was piqued, and I grabbed the magazine after they left. I read it cover to cover during my shift.

Thanks James, and thank you Bitch!

Relevant: Who's Who: Behind-The-Scenes at Bitch Media 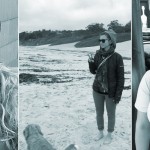 by Bitch HQ
A Q&A with the awesome crew at Bitch Media that you may not be as familiar with.