Declare Your Independence: Why Subscribing to Bitch is Better for the Environment | Bitch Media

Declare Your Independence: Why Subscribing to Bitch is Better for the Environment

Most Bitch readers buy the magazine off the magazine rack, at a bookstore, a grocery store, or a boutique. This is called newsstand distribution, and it’s a system that is built on and rewards waste and inefficiency. For example, most magazines (though not us) deliberately augment their print runs in order to increase advertising rates. Wholesalers over-order magazines to ensure that racks stay full, and publishers comply, fearful that they will lose their spot on the newsstand if copies run out. Middlemen make it impossible for publishers to choose how many magazines go to which outlet and intentional lack of point-of-sale information make it impossible to know where magazines are selling well and where they are not.

This doesn’t just waste money—it wastes petroleum and fills landfills. Here’s why. When magazines go unsold—about 65 percent of all magazines printed in the industry as a whole—their covers are ripped off and they’re shipped back to distributors who destroy them. Mindfully.org reports that annually, of the 4.7 billion magazines shipped to stores, almost 3 billion are not read and destroyed. Those unread magazines would circle the Earth twenty times over. To make matters worse, less than 5% of magazines have recyclable content (If you think glossy mags are bad for self-esteem, think of what they do to the planet!) This is not a game Bitch likes to play. It’s bad for the environment and it’s bad business.

Right now, for every one copy we send to a subscriber, three copies go to the newsstand. Until Bitch readers reverse this ratio, we’re stuck on the newsstand. If everyone who currently buys Bitch off the bookstore rack became a subscriber, we would be able to print one magazine for every subscriber and eliminate waste. So help us out. Support Bitch Media and support the environment by subscribing to Bitch magazine at this special rate of $19.96.

Here’s a sample of what can be yours!

I used to work one day a week as a magazine merchandiser at grocery stores. I was the one who ripped off the covers of maybe 1,000+ unsold magazines a week- per store! The waste was incredible, probably about 80- 85% of the magazines (and paperback books) I stocked I threw away.
I never thought about what a great step subscribing to a magazine is in reducing waste, though! Thanks for posting this! Totally an eye-opener!

couldn't they be donated to a museum or library or homeless shelter or schools or a million other places except being thrown away? Is there a reason bookstores don't do this?

You'd think, but bookstores don't actually own the magazines. Wholesalers ship the magazines to bookstores, grocery stores, etc. on consignment and when copies don't sell, those copies have to be "returned." If bookstores didn't tear off the covers and send them back, they'd have to pay for the unsold copies.

Ack, so depressing to hear about the systemic waste. But awesome to know that there's something we ("small people," as the BP CEO calls us) can do. Subscribe to my favorite magazine? Not terribly hard...Thanks for letting me know how much good my subscription will do you and the planet.

what has notoriously been a problem for my friends and i is that the bitch magazines that go out to subscribers tend to arrive much later than the ones that hit newsstands. i don't know if this has something to do with the fact that we live in canada or some other issue entirely. i know several people though who have subscribed in the past, become frustrated with this problem (we are eager to read bitch! can you blame us?) and have switched to reading newsstand copies.
is there a reason for this? does this continue to be an issue? as i mentioned: none of us have subscribed in some time... i do know that even newsstands here tend to get copies significantly later than US newsstands, which makes me pretty bummed out.

That sucks. It's so irritating to see a magazine you subscribe to on the newsstand before it gets to you.

I think some magazines do it on purpose. We don't. Bitch is nonprofit and reader supported and we want our subscribers to feel appreciated. I know that in the US where we are able to control things a little better we delay the shipment to the newsstand so subscribers receive the copy about a week before it's on sale in stores.

I'm glad to learn this is a problem and I'll check to see if things have improved; if not, we see what we can do about it.

i appreciate this. i look forward to hearing more. :)

Just thought I'd chime in as another Canadian and say that I also don't get my copy until well after it appears on the newsstand. I'm not sure whether Canada Post delays it or what, but sometimes I start to wonder whether my copy has been lost in the mail before it finally shows up. It's always worth the wait, though!

Sooo.... I'm a little confused by this. If I were to subscribe, wouldn't an extra magazine just be printed for me? I find it hard to believe that less magazines would be sent to the newsstands in my area no matter how many people in my area subscribed. So really it wouldn't cut down on the number of wasted magazines at all, just add to the total number of magazines. Right? Unless ya'll mean that reading Bitch leads to enlightenment which could save the environment. That I could believe =). Otherwise, I just feel manipulated and kind of offended by this article.

You’re right. It’s not quite as simple as one subscriber equals one less copy on the newsstand. What we’re asking for is collective action, a groundswell of readers to stop buying off the newsstand and start subscribing. Most magazines have more subscribers than newsstand sales for each issue. Bitch is an outlier here, but if we could reverse that ratio, and by having half of our newsstand buyers become subscribers, we would have a very different business model that would allow us to significantly reduce the number of copies we send to the newsstand. The newsstand is great for outreach, bringing in new readers, and giving people an alternative to the manipulative ad-filled glossies, but it makes us dependent on an unsustainable system that isn’t good for the environment or our financial security. (Stay tuned for Thursday’s post on the financial implications, but the short version is that we make about 7 cents for every copy sold on the newsstand! When you subscribe, your money goes to Bitch, which is a nonprofit, supported by readers, and not the string of middlemen involved in newsstand distribution.)

Thanks for raising this question and I hope you will decide to subscribe!

I subscribe, because I live in the middle of nowhere now and stores here don't carry Bitch, but I'd sure feel like that made more of a difference to the environment if the magazine didn't come encased in a plastic bag!

I've been a subscriber to Bitch since about 1999, and my current sub is up for renewal now. But I have to admit that I had second thoughts about resubscribing. Not because the quality of the magazine has gone down - it hasn't - but because I'm Irish and international subscriptions have become, frankly, ludicrously expensive. A year long international sub now costs $59, 40 dollars more than a US sub. That's basically $15 per issue. Considering it costs, at the very most, $5 to airmail a single magazine from the US to Ireland, I'm not sure how this can be justified. The difference in price for US and international subs hasn't always been so huge.

I do love the magazine and think it's important to support it, so I'm pretty sure I'm going to renew the subscription. But I had to think carefully about whether I could afford to do so. 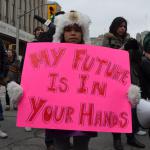 by Sarah Mirk
Environmental justice is the intersection of power, discrimination, privilege, and the environment.