Born in Kerala, India in 1934, Kamala Das pushed the boundaries of poetry, expression of womanhood, love, and sexuality. Writing in both Malayalam and English, Das won a plethora of prizes for her literary skill, and was nominated for the Nobel Prize for Literature in 1984. On Tuesday, a crowd gathered at the Palayam Juma Masjid in Thiruvananthapuram to give their respects and say their final goodbyes. She was given a state funeral that included a gun salute as her body was deposited into the earth.

Though some may label Das a feminist, she was always reticent to apply the label to herself: “Yes, I know, yesterday I might have been against liberation, today I am for it. Tomorrow I do not know what I would say, and how I feel.” Regardless of labels, Das was an iconoclast who leaves us with an inspirational body of work. We have spent our youth in gentle sinning
Exchanging some insubstantial love and
Often thought we were hurt, but no pain in
Us could remain, no bruise could scar or
Even slightly mar our cold loveliness.
We have lain in every weather, nailed, no, not
To crosses, but to soft beds and against
Softer forms, while the heaving, lurching,
Tender hours passed in a half-dusk, half-dawn and
Half-dream, half-real trance. We were the yielders,
Yielding ourselves to everything. It is
Not for us to scrape the walls of wombs for
Memories, not for us even to
Question death, but as child to mother’s arms
We shall give ourselves to the fire or to
The hungry earth to be slowly eaten,
Devoured. None will step off his cross
Or show his wounds to us, no god lost in
Silence shall begin to speak, no lost love
Claim us, no, we are not going to be
Ever redeemed, or made new.

I believe Kamala Das' works speak so poignantly about the need for us to label and understand. Could this be caused from the constant information placed inside the airwaves making us know: everything about Britney Spears and Lauren Conrad? I wonder- if we know so much about such irrelevance does it cause us to want to know about life's substantial questions? or does it leave us dumbed down and accepting of everything we are told and see.

Her poetry is considered to be the most moving and tortured. My favorite poem from The Descendants:

The Maggots
At sunset, on the river ban, Krishna
Loved her for the last time and left...

That night in her husband's arms, Radha felt
So dead that he asked, What is wrong,
Do you mind my kisses, love? And she said,
No, not at all, but thought, What is
It to the corpse if the maggots nip? 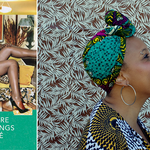 by Amelia Ayrelan Iuvino
Morgan Parker’s book is an exciting contribution to the rich legacy of Black feminist art, literature, poetry, and music.