Diablo Cody Takes on the Wakefields

Those of you who lost your wetties over Kjerstin’s and my pan of Jennifer’s Body (one Twitter follower says she “doesn’t want to know [us] anymore.” Move on.org already, amirite?) can take heart in the fact that we are not total haters. I for one am genuinely psyched at the news that Ms. Cody will be adapting Sweet Valley High for the big screen. 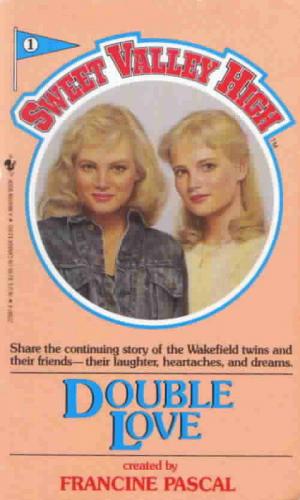 Girls, I hope Todd will still like you when you bust out the wise cracks!

I think Diablo Cody is a great choice to take on the Wakefield twins because I think she can keep things campy and somewhat edgy at the same time, and she doesn’t hate women or girls (hey, lots of Hollywood folks do). Part of the reason I didn’t like Jennifer’s Body was because I thought the film was a bit too flippant about things like rape and murder (same with pregnancy in Juno), but in the hallways of Sweet Valley High the most pressing issue is usually who will win in the game against Big Mesa next Friday. It’s a perfect vehicle for the snarky, smarty-pants teen girls Cody is known for creating.

Beyond that, Sweet Valley High is a series that is much-beloved by women of a certain age (I myself am of that age) and I think Cody really gets that. Rather than marketing this film to actual high schoolers, my hope is that it is being made for those of us who read the books as kids 15 years ago and dreamed of writing for the school paper like Elizabeth or being captain of the cheerleading team like Jessica. After all, we are primed for the nostalgia an SVH movie could stir up. (BTW, is this nostalgia a good thing, or does it keep us in the past? Do we care?)

Now for the important stuff: Who will play the Wakefield twins? Do you think Cody will stay true to author Francine Pascal’s description of the twins as having “sun-kissed blonde hair, golden California tans, dazzling blue-green eyes, tiny dimples in their left cheeks, perfect size six figures and being five foot six on the button”? Or will she dare to make them edgy brunettes a la Ellen Page in Juno? What about Todd Wilkins? Will Cody stray from his jockishness and cast a sweetheart nerd like Michael Cera or Johnny Simmons? Do we want her to?

Leave your predictions in the comments section! And let’s go SVH!

I am really excited about this. I loved the Sweet Valley High books. Elizabeth made it cool to be smart.

Part of me can't wait to see what Diablo Cody does with the movie. The other part is afraid she'll mess with my fond memories of reading the books and sharing them with my sister.

Going to the library tomorrow to see if they still have the series!

This is the strangest news I've heard in a long time. I'm intrigued. Haven't thought highly of the SVH & co. books since I was old enough to recognize its very problematic stereotype-laden roots (though I still LOVE Pascal's other, more mature series, Fearless) but Cody could freshen it up in a big way.
Several good ideas in the EW article/comments, along with a number of truly bad ones (please, not Hilary Duff or Hayden Panettiere!) If they got Kristen Bell for the twins, I would be too excited for words. Those of you who are familiar with her work, especially as my favorite TV character of all time, Veronica Mars, can imagine what she and Cody could do to transform the two-dimensional characters.

Honestly, I was pretty bummed when I heard that Diablo Cody was going to be adapting SVH for the big screen. My exposure to Sweet Valley began in grade school -- I was an avid reader of the <i>Sweet Valley Twins</i> books before graduating to <i>Sweet Valley High</i> and <i>Sweet Valley High: Senior Year</i> or whatever the cheesy 90s extension of the original SVH was called. As an undergraduate (BS in Education with a focus in Cultural Studies) I wrote many a paper on how YA lit can shape expectations regarding social norms and was always secretly thrilled at the prospect of turning a critical eye to the SVH books that I read so avidly in my adolescence.

I haven't seen <i>Jennifer's Body</i> and am not sure that I will, but I wasn't a fan of <i>Juno</i> and find "the snarky, smarty-pants teen girls Cody is known for creating" off-putting and disingenuous. They seem like flat, lifeless caricatures of the "snarky, smarty-pants teen girls" that I knew and loved as friends, classmates, and, occasionally, fictional characters. I am not interested in Diablo Cody putting together a nostalgia driven adaptation of the film, nor am I interested in a semi-satirical re-imagining.

I think SVH exists at its best as a series of books. I know that the things I found most interesting about Sweet Valley were the recurring situations, images, descriptions, etc. For me, the big picture is what makes SVH so charming. A film would, I believe, end up being more like a clip show than anything else: a desperate attempt to nod to/include 100+ books worth of repetition: the 1BRUCE1 license plate, cheerleading tryouts, high school sorority recruitment, the Dairi Burger, the Droids, etc. Not to sound like a totally pessimistic jerk, but I'd rather stay home and reread <i>Playing With Fire</i>.

though mostly I'm just really excited that I'm not the only one who remembered Bruce Patman's license plate. I stuck w/ those gals through Sweet Valley University. I'd be ashamed if I didn't think half the people reading this had at least read the original series :)