Smitten with the Mittens | Bitch Media

Smitten with the Mittens

When Bitch released our Loud issue way back in September, our Pop Culture Debate Club at our local feminist bookstore and community center (slash last-standing feminist non-profit outpost!) In Other Words had chips and salsa, small dogs, and no lack of heated debate....over who was the greatest female rocker OF ALL TIME.

While no one can say Chrissie Hynde of the Pretenders isn't a total bad-ass, an unlikely argument was made for one Mariah Carey as the ultimate lady rocker and would you believe me if I said I wasn't just a little convinced? Chelsea Morrisey made the claim, and is on her way to rockstardom herself as a founding member and frontwoman of the emerging Portland band Dirty Mittens,who I had the chance to see the other night! Chelsea Morrisey (right) loses her guitar momentarily to reach for the stars. Photo by Michael Barrett.

I had the luck to catch them (alongside Church) celebrating their third birthday with a free show! What started out as a lo-fi trio has morphed into a six-piece pop machine, complete with soulful organ, rhythm guitar, Chelsea's distinctive vocals (she was definitely channeling Mimi at times), and some serious saxophone that has been to the other side of irony and back.

Dirty Mittens has a fun sound and good lyrics to boot, filling the straight-up pop-rock hole in the post-punk, 80s-electro-revisionist, neo-folk laden scenes of Portland. No word yet on a tour, but in the meantime you can fill these last few days (weeks?) of winter with a little bounce! (You can't argue with a cover of fellow-Nor'westers Fleet Foxes!)

I love me some Dirty Mittens. I really wanted to go to that show but I didn't make it out...busy planning a protest. Sounds like it was awesome though. I've seen them a few times before and Chelsea and the gang never let me down. I've been wanting to see Church for a while now and haven't had the chance yet...

But I must warn you that (gasp!) it also has MEN in it! But as a man I can safely say that we can also be bitches sometimes (some of us more than others). But seriously I saw Dirty Mittens at a House show last fall with the "electro-funk" band Dat-R and had a great time. It's amazing just how great some of the Portland bands are right now and what's even more amazing is how small and unknown most of them are. Church is also great but I haven't been able to see them live yet. I would like to see more females out in the scene but good music is good music.

Relevant: Sex, Struggle, and Mac-n-Cheese: Sex Stains Reminds Us Why We Love Punk 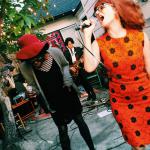 by Emily McCarty
The new female-fronted band sings about mansplaining and misogyny with merciless energy.