You may have heard of the classic story Alice in Wonderland. In the 1951 Disney film version of the Lewis Caroll tale, Alice finds herself in a newfound world, where she meets a cast of rude characters with outlandish customs, including a hookah-smoking caterpillar. Now what if instead of falling into Wonderland, Alice were kidnapped and taken to Arabia?

Last Monday, ABC Family, a division of Disney, announced that this was precisely the plot for a new pilot called Alice in Arabia. The drama would revolve around a rebellious American teenager Alice who loses her parents and is then taken by her extended Saudi Arabian family and held prisoner in her grandfather’s compound. The press release stated that “Alice finds herself a stranger in a new world… surviving life behind the veil,” and boasted that the script was written by novice TV-writer Brooke Eikmeier, who served in the U.S. army in Colorado as an Arabic cryptologic linguist, trained to support NSA missions in the Middle East.

I wasn’t the only one who cringed upon hearing the news.

Outcry exploded on Twitter with the hashtag #AliceinArabia and Time, The Guardian, and HuffPost Live all put out critical reactions that said, frankly, Alice in Arabia is totally racist. The American-Arab Anti-Discrimination Committee (ADC) and the Council on American-Islamic Relations (CAIR) made public statements of protest. On Friday morning, things intensified when Buzzfeed published the self-explanatory article, “We Got A Copy Of The Script For ‘Alice In Arabia’ And It’s Exactly What Critics Feared”:

The Saudi record on women’s rights is in fact atrocious, but the script focuses less on that society’s internal struggle than on a simple dichotomy between the identities “American” and “Muslim.” Nearly every devoutly Muslim character opposes American ideals, and vice versa. One character refers to Alice’s mixed identity as “half Jew-loving monkey.” [Her grandfather] describes America as a “perverted world” where women are forced to “starve and cut themselves thin and big titted.” Later, a young girl posits that Muslim women have two options: to be modern and free, or to be loved by God.

Friday night, ABC Family killed the show. They explained, “The current conversation surrounding our pilot was not what we had envisioned and is certainly not conducive to the creative process, so we’ve decided not to move forward with this project.”

Shutting down a network show in five days speaks to the power of Twitter activism and social media’s conduciveness for mass mobilization. Most media outlets and tweets declared it a victory, including the ADC and CAIR, who had set up a meeting to discuss the script with ABC Family executives. Arab-American comedian Dean Obeidallah disagreed, saying that he would have preferred to see the discussion start instead of end and that if some critical tweaks had been made—i.e. eliminating the kidnapping angle—the script had potential for “fair” representation.

Conservatives complained that Muslims just don’t want to look bad, but it’s not that simple. Nearly half of Muslim students in California schools have been bullied. Arab Americans face higher rates of employment discrimination and challenges with government watch lists, hate crimes, immigration, and “flying while Arab.” There’s been a surge of legislation designed to vilify Islamic religious practices. And that’s just within the United States, never mind our foreign policy. The fight for “fair” representation is about integrity—and protecting peoples’ lives.

Let’s visit some facts that pop culture overlooks. Nearly 25 percent of the world’s population is Muslim and there are few positive examples of Muslim characters on American TV. When TLC launched All-American Muslim, a reality show about the mundane lives of five Michigan Muslim families, critics pounced on it as “an attempt to manipulate Americans into ignoring the threat of jihad.” Rabia Chaudry, who gives trainings to law-enforcement agencies, finds that at least 50 percent of the time law enforcement employees mention the ’90s film Not Without My Daughter—which is about an American woman who travels with her Iranian husband and their young daughter to Iran, where he holds them captive—when discussing women and Islam. This dominant narrative runs deep in our psyches.

Show writer Brooke Eikmeier tweeted last week that the show was “meant to give Arabs and Muslims a voice on TV.” (She and the network claimed that Middle Easterners would eventually be employed for the project.) Only 15 percent of television writers are women, so while it’s good that ABC hired a novice female writer, her military background does not make the script more “authentic” as the network suggested. I’d like to think that humans are capable of telling compelling stories outside of their own identities, but under the current conditions with anti-Arab racism and Islamaphobia being the norm, we’re not there yet. Middle Easterners and Muslims need to be included at every stage in the creative process.

Still, I can’t say this is a total victory. Considering how difficult it is to get new scripts greenlit, now the networks may be even less likely to touch Muslim or Middle Eastern themes or characters, outside of the token terrorist. Initially, I agreed with those who felt that Alice had to be thrown out with the bathwater. What would be salvageable of a script rooted in Orientalism and “Arab face”? But the plot includes important elements that ABC Family could handle, given they’ve dealt with tough issues on The Fosters, a show about an interracial lesbian couple raising kids. If it were significantly re-written, Alice could be about a mixed-heritage Muslim teenager, with an immigrant mom from Saudi Arabia and a white dad, who is growing up in a U.S. suburb going to private school. These elements were already in the script. Her grandparents come to visit and she learns more about her family’s history. She has to make sense of what it means to be a Muslim, an Arab, and an American. Where does she belong? It’s a hard question that Arab Americans have to face—I certainly had to—as well as other mixed-heritage people. Huge numbers of mixed teenagers are already pondering these issues. In terms of villains, a tyrannical grandfather isn’t necessary—high schools have plenty of baddies. Somehow 90210 managed to win fans without resorting to demonizing a religion.

Today’s teens have access to more information and more options than ever before. They get to challenge and create their sexual, religious, and racial and ethnic identities like no previous generation ever has. This could have been a crucial coming-of-age story. It could still be. Hopefully, ABC Family will step up. 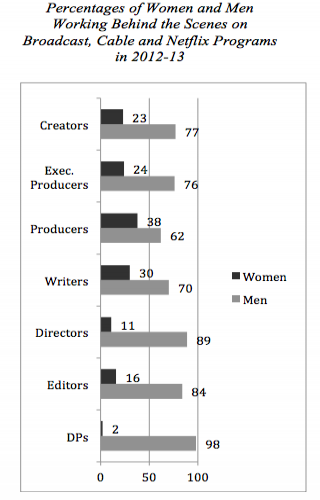 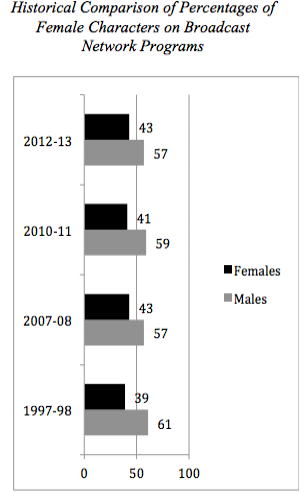 Two charts from the Center for the Study of Women in Film and TV show the gender gap in prime-time TV.

Stephanie Abraham is a writer based in a suburb of Los Angeles. Read all about her at stephanieabraham.com.