Disney's "The Lone Ranger" is So, So Bad | Bitch Media

Disney's “The Lone Ranger” is So, So Bad At one point in Disney’s new The Lone Ranger, Tonto turns to his companion and describes a massacre against his people, “The rivers ran red with blood.” Well, so will this review, because all I felt for a two hours and 29 minutes was anger.

The movie begins in a miserable-looking carnival in 1933, when an adorable masked cowboy kid walks into a tent promising glimpses into the Wild West. He stops at a placard that reads, “The Noble Savage in his Natural Habitat” that is home to a kooky old man who claims to have known the boy’s idol, the legendary Lone Ranger. We’re taken into a clumsy backstory of how Tonto and the Lone Ranger became unlikely compatriots to save the town from heart-eating outlaws, an insecure general, and a corrupt business man.

In its promotion, the film promised to be movie on par with western classics and to make Tonto a more complex, central character than he’s ever been. But The Lone Ranger is fool’s gold on both counts. It’s no classic and it certainly isn’t a progressive take on a regressive trope.

Bad craftsmanship is one thing—and the film has plenty of sloppy editing and character development—but continuing the Hollywood tradition of treating Native American on-screen characters like packing peanuts to sell a genre throwback is another thing altogether. While the team of six writers bloated Tonto’s role for star Johnny Depp to more than that just a sidekick, his character feels as bland as ever.  Tonto-speak aside, he is not given a dynamic character arc like John Reid/Lone Ranger nor is he allowed a love interest nor any friends. This is apparently due to a childhood mistake that lead to the massacre of his tribe. Tonto becomes a lone weirdo who makes up his own culture in exile, so let the odd quirks and tics run wild! In the carnival exhibit, Tonto feeds the dead bird on his head, mystifying the kid listening to him. In another scene, Tonto navigates the desert by licking sand. Such strange mannerisms recall more Jack Sparrow than anything and only play up Tonto's otherness and mythical connection to forces we cannot see.

What about the other Native Americans in the movie? They aren't always background filler (talked about, but not talked to)—at one point, a Comanche tribe takes in Tonto and Reid and recounts Tonto's tragic background (stoic Natives: always good for storytime). The leader dismisses Reid's offers to help stave off war by saying, "We are already ghosts." When they retreat, white men with guns chase the tribe off-screen to certain death. Our two leads are left behind, buried up to their chins in sand, cracking jokes while a massacre is taking place yards away from them.

Just because all of the many villains in The Lone Ranger are white, that doesn't atone for the stereotyping of a marginalized group. If anything, it makes for a less interesting story about a bunch of stock characters leftover from a scrapped Sergio Leone film. Plus, if you want to relive the nostalgia of Dances with Wolves (no), then you're in luck: eventually, the tribe comes to the rescue of the Lone Ranger only to get mowed down by a General Custer look-a-like. White guilt forever!

But let's go back to the beginning, when one of my favorite bloggers, Adrienne Keene of Native Appropriations, first wrote about what was problematic about the Lone Ranger getting a reboot. Keene called out many of the reasons why Tonto remains an important talking point in terms of media representation:

"Think of every recent major studio film that featured a Native character or Native actor. All of the ones I can think of off the top of my head were set in a historical context, were a fantasy film, or were offensively stereotype laden. There have been so few accurate, modern, nuanced portrayals of Native people it's not even funny… We can't be complacent with just going to that 'excited-happy-place' every time we see any representation of an Indian on screen. We can't be thankful that 50 Native actors are able to ride around bareback in the background of a film, or be psyched that a big name Hollywood actor put a crow on his head to 'honor' us–talk about ongoing colonization of the mind. Our community is so much better than that. We are worth so much more than background roles and misrepresentations."

Then she addressed what the hell was happening with Tonto's getup. The bad KISS makeup job was based on Kirby Sattler’s work that, according to Keene, “relies heavily on stereotypes of Native people as mystical-connected-to-nature-ancient-spiritual-creatures, with little regard for any type of historical accuracy.” In an interview with EW, Johnny Depp mused, “Tonto’s got a bird on his head. It’s his spirit guide in a way. It’s dead to others, but it’s not dead to him. It’s very much alive.” Oh good, so we can keep “spirit animals” alive in the lexicon.

The Lone Ranger also fails the Bechdel test. And drags on way too long. In short, the “spirit guide” of this film would be an odious trash heap.

On the bright side, now that I’ve finally sat through the film, I can wait for the onslaught of merchandise that will give boys the opportunity to play cowboys and Indians again!

Right. Boys. Because the women-folk are too busy fetching water and pulling biscuits out of the oven. Come on. You can't put down Disney for stereotyping and then do the very same thing yourself.

If you click on the link, you'll see the link is for the boy's Tonto's costume. I'm sure girls can still buy Pocahontas costumes, but in terms of TLR, this is what's affiliated with its release.

Relevant: The Orientalist Narrative and Erasure in "Whiskey Tango Foxtrot" 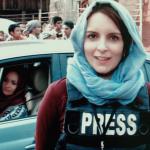 by Stephanie Abraham
Is Tina Fey's latest film the most "American white lady story" ever?