The Best Thing About “Tomorrowland” Is the Spunky Teen Girl Genius 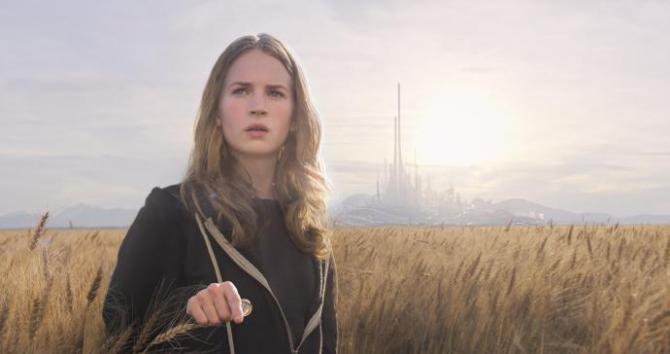 Disney’s Tomorrowland is a feel-good film built around a simple, optimistic idea: If all the dreamers, artists, and geniuses truly pitched in, we humans could work our way out of this current mess of climate change, constant war, and global inequality. Tomorrowland pins its hopes on science and imagination to save the world, celebrating the people who dare to be bold and innovative. It’s extra disappointing, then, that the much-hyped film itself feels overwhelmingly bland.

On paper, Tomorrowland sounds great. George Clooney channels equal parts Doc Brown and the cartoonish hermit from Up for the role of crotchety old genius Frank Walker, who longs for the rosier days when he was a whiz kid obsessed with space-age technology. Through a series of antics, he’s forced to team up with Casey (Britt Robertson), a stubborn teen who’s also an electronics savant. Together, they must save all of humanity and evade a squadron of well-dressed robots who bear an eerie resemblance to Matrix assassin Mr. Smith.

The film opens on the aging Frank. He explains that these days, what with all the talk of impending environmental apocalypse, the future is scary. When he was a kid in the 1960s, old Frank says, the future was brighter (the film politely overlooks the Cold War threat of nuclear winter). Cut to the 1964 World’s Fair, where pint-size Frank unveils a jetpack he has built in his backyard, catching the eye of a poofy-skirted girl named Athena (Raffey Cassidy). She swiftly reveals that within Disney’s “It’s a Small World” ride, there is a door to another dimension: a glass-and-steel Tomorrowland straight out of the design books of Le Corbusier, complete with tall buildings, prolific public transit, and a multicultural array of attractive people wearing vaguely geometric clothes.

“Who are you?” Frank asks Athena. Steely-eyed, she responds, “I’m the future.” You get the picture. The film’s set-up is interesting, which is why it’s sad that the story itself is marred by trite dialogue, rampant moralizing, and plot holes the size of Jupiter.

A concept drawing for Tomorrowland, which look like a distinctly retro vision of the future.

The best part about Tomorrowland is Casey. She quickly becomes the film’s central character and we get some fun and utterly over-the-top scenes of her riding a motorcycle through the dead of night on her way to break into a NASA facility. Meanwhile, by day, she handily fixes her dad’s electronics projects and acts as big sis to an adoring younger brother. In school, her teachers drone on about global catastrophes—starvation, dystopian governments, melting ice caps—while she strains in her seat with her arm raised. When the teachers finally give her the chance to pipe up, she has only one question, “Can we fix it?” Sappy, yes, but this ethos is a welcome counterpoint to other future-looking films like Interstellar, were instead of finding ways to heal the earth, the brightest minds were focused only on finding effective ways to flee it.

Casey turns out to be a lot like a young Indiana Jones, a brilliant and rebellious explorer who matches book smarts with physical feats of daring—she even has a beloved hat that she insists on never leaving behind. It’s nice to see a character like Casey in a mainstream movie that’s being marketed as family fair—not sidelined as a “chick flick”—and she holds her own as a brainy, good-hearted adventurer.  Sadly, after her action-packed introduction, for the rest of the film Casey is reduced to shouting questions at full volume. “What’s going on?!” she shouts. “What’s happening?!” “Who are you?!” The other characters, of course, refuse to answer her questions, dragging out a “mystery” that the audience figures out eons before her. Casey’s non-shouty contributions to the plot come in instant epiphanies as she tags along with Athena, a wee lil’ Terminator who kicks the butts of the baddies and corrals crusty Frank into coming out of his well-wired hidey-hole. Together, they prove that it’s rather tiresome to have a plot hinge on an all-knowing genius, an unstoppable android, and a guy who knows where all the secret spaceships are stored. There’s no puzzle-solving or real thrill as Casey, Athena, and Frank head through a CGI playground via one predictable scene after another. Through it all, you know that good will prevail, bad metaphors will be told at length, and Casey will solve all dilemmas in a brilliant flash. I think Tomorrowland suffers from being released so soon after several much more original films. Its questions about the relationship between technology and humans feel like a very light retread of Ex Machina while its aesthetic visions of a bold new tomorrow look like yesterday’s fashions compared to the brilliance of the costume design in Mad Max: Fury Road. Those movies, of course, are very adult. But Tomorrowland lacks the inventiveness and heart of Wall-E or even The Hunger Games. 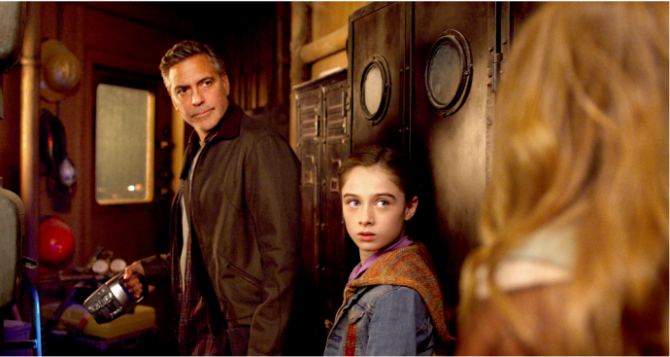 George Clooney and Raffey Cassidy as the odd couple, Frank and Athena.

Although I deeply agree with the films let’s-fix-this-world moral, the way it’s expressed in by the characters feels tiresome. Instead hitting audiences hard with an authentic feeling of working for the greater good, Tomorrowland feels like a sequence of random spectacles thrown together for dramatic effect, followed up by some obsequious product placements. By the end, it feels like Disney is saying our problems can be healed if we all buck up, think positive, and buy the world a Coke. I found myself nodding along to the villain’s final monologue, which is probably a bad sign. I hope there are some young girls out there will take heart in seeing a heroic, science-loving teen girl onscreen. For everyone else, can I recommend staying home and reading Ursula Le Guin instead?

Related Listening: Our feminism and science fiction podcast is all about future-focused feminists.

by Sela Gebre
By honoring Black life in all imaginings of our futures, these films present us with a blueprint for worlds in which where Blackness is honored, period.