To anyone being raised in the 90s, whether as a kid or teenager, the new book Slimed!: An Oral History of Nickelodeon’s Golden Age (out in September 2013 from Plume) is an excellent nostalgia trip.

Like millions of Americans reared in the nineties, I grew up rather mindlessly consuming Nick’s cartoons and teen sitcoms. Slimed author Mathew Klickstein prods viewers like me to revisit the influential channel’s beloved shows with an eye on racial diversity, gender dynamics, and the process behind creating each show. Material from interviews with cast members and production crews provides incredible intimate details about the history of Nick in its early days and the lives of those involved with the network.

Take, for example, Doug, the Jim Jinkins-created cartoon about an awkward middle schooler and his oddball friends that aired on Nickelodeon from 1991-1994 (it was later picked up by Disney and run with somewhat changed voice casting and character design from 1996-1999). While at the time, I just thought it was funny that Doug’s friends had all sorts of weird skin colors—with the exception of Doug himself and his family (who are white), few of the characters are human colored, instead representing a range of colors including vibrant blue, lavender, and sickly green—the decision to color the characters with rainbow hues was a conscious commentary on racial diversity. In Slimed, the show’s executive producer Doug Campbell explains the unique coloring decision: “Look, we’re not black people, we’re not Mexican, but we want the cartoon to speak to all groups. How do we get past the barrier or ethnicity? And Jim said, ‘Let’s try coloring them all different colors.’”

The rainbow cast coloring allowed many fans to project their own ideas about race onto the characters of Doug. A particularly good example of this practice is Skeeter, Doug’s skateboarding blue best friend. Jinkins says in Slimed, “It’s pretty common knowledge that Skeeter was African-American. And I love that, because I did not consciously set out for that to be the case; I just thought he looked good blue.”

The unusual take on diversity in Doug gave kids of any and all ethnic backgrounds a way to relate to the characters onscreen without creating circumstances ripe for stereotyping. This was especially important considering that at the time, Nick’s live action casts were overwhelmingly white.

It’s unfortunate that Doug and his family remained white in this context—his family stands out as the Caucasian “norm” on the show. But pushing to make Doug’s family not whitebread may have been too radical for the studio’s first Nicktoon. Gus Hauser, one of Nick’s most important founders, admits in Slimed! that Nick’s choice to market their programming to “kids with cable” created certain problems: “The others didn’t get Nickelodeon… Children who couldn’t afford cable were getting some children’s programming from PBS. Sure, it brings up issues of diversity and income level.”

Still, Nick’s early programming had some strong points in its racial representation: Nick Arcade, a kids’ game show program from 1992, featured Phil Moore as the only African-American host of a TV show at the time, and producers actively sought out kids (and adults) of color to be cast both as guest stars and permanent characters. Nick’s representations of ability and gender were also better than most at the time, including a positively represented feminist character on Rugrats (the twins’ mom—remember her?) and a paraplegic single dad on Doug.

Good multiracial representation on television is still hard to come by today: GLAAD’s most recent “Where Are We on TV” report shows 78 percent of series regulars on broadcast TV are white (there are no statistics available for kids’ programming specifically). Nickelodeon had a long way to come in the 1990s and it still does today, but positive portrayals are not impossible to come by.

For more about Nickelodeon’s early practices, in diversity and other areas, pick up Slimed!: An Oral History of Nickelodeon’s Golden Age when it goes on sale this September.

I was such a Nick junkie. I recently watched a few episodes of "All Grown Up" on Netflix (the show with the grown-up Rugrats) and was bummed to see the twins' mom no longer had the shirt with the female symbol on it. However, in one the episodes, the now-tween twins dragged it out of the closet to use for a costume for their monster movie. :) I cackled with delight.

<p>Have you watched the entire Nickelodeon series, <em>Avatar: The Last Airbender</em>?
You will only see positive portrayals of characters of color.
The multiple female characters are amazing frequently (I want to type 'entirely', but there are 61 eps, so...) pass the Bechdel Test.
</p><p>If anyone has watched the show, I think they would agree with me that it is one of the best things to have ever been put on television. Ever. It's a 9 out of 10! It would've been a 10 except all the teachers/advisers/mentors who help the young heroes along are all men. Except, marginally, Gran Gran.&nbsp;</p>

You're right, Frank--most of the GAang's advisers are men (though you could argue that the Kyoshi warriors, Ursa, and former female avatars count--but still not as much as people like Pakku, Guru Pathik, Bumi, and Iroh). But things do improve in <i>The Legend of Korra</i>--Korra's waterbending/healing instructor is Katara, and there's also Police Chief Lin Bei-Fong and Aang and Katara's daughter-in-law Pema helping her along.

I'd reconsider using the image of Disney Doug to illustrate the point of the article. Disney sanitized and killed Doug.

Unfortunately I couldn't find a full-cast image that was from its days on Nick. If you've got one though I'd certainly like to use it, since you're right that some of the changes Disney made were, well, not what I'd call feminist.

Can't help but note the irony that the author's surname is White.
Also, I'd hazard a guess that 78% of TV characters are white because, well, over 70% of Americans are white.
The representation of a variety of races in children's shows is no doubt important, but you can't be surprised or annoyed that in a country with a predominantly white population, a majority of its TV characters are the same race.

White is also the last name of the mayor on Doug. And he and his son have brown skin and white-or-purple hair.

Good points, Doug was legit in some ways. Rugrats however, was Feminist as all get out. Probably one of the most Feminist-minded broadcasts ever.

There was a loud and proud strong feminist wife complete with domestic husband, gender-neutral twins, professional mom with stay at home dad and nurturing grandfather figure, successful professional couple where the wife is more successful complete with male assistant, black professional family, sensitive single dad with a sensitive son, the main "villain" was a physically dominant female... and so on. Brava.

I dunno, I think Rugrats is pretty overrated. I definitely wouldn't extoll it as being this amazing perfectly feminist thing either considering when it came to the baby characters the females seemed to get the least attention except for Angelica, who was almost always restricted to an antagonistic role. Not to mention it was awful in terms of racial diversity, considering almost all the characters were white and what few who weren't were probably some of the worst examples of tokenism on tv at the time (Suzie especially was an absolutely terrible character).

In before a lynch mob comes for my head on a platter.

I think both television shows Hey Arnold and All That is another perfect example of racial diversity on Nick.

Relevant: Saying Goodbye to Maria and the End of a Sesame Street Era 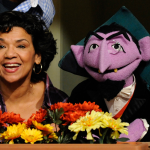 by Angely Mercado
Growing up, Sesame Street's Maria was one of the best Latina role models I had.