On the Map: Do Do-Gooder Celebs Actually Do Good? | Bitch Media

On the Map: Do Do-Gooder Celebs Actually Do Good? It’s no secret that New South Wales native Miranda Kerr, a VS angel model and Orlando Bloom’s soon-to-be wifey, likes to be photographed sans clothing in order to make a rather tenuous point about environmentalism. The apparent (and cliché) connection that nude = natural = nature = save the koalas might even convince a precious few were Kerr to actually reserve her exposed flesh for the cause, but she doesn’t. She takes it off for anyone who puts the right number of zeros on her paycheck, which is not to say that’s inherently bad, just that it undermines the issues she purports to support. After emulating a biblical Eve-like pose while chained to a tree for the cover of Rolling Stones’ “Green Issue” earlier this summer, Karr is now lending her naked celebrity to a newly released organic skincare line called KORA, the naming of which was reportedly influenced by Kerr’s Buddhist beliefs.

“Kora” is a type of Tibetan Buddhist meditation that involves circumambulating a sacred site, particularly the spiritually significant places to which Buddhists make a pilgrimage specifically to perform their prayers, such as Mount Kailash in the Himalayas of Tibet and the Swayambhunath and Bodhnath stupas in Kathmandu. I’ve been to both stupas, and despite my cynicism about religion, I was moved while witnessed the beauty of kora carried out at the base of Bodhnath by hundreds of monks and practitioners in ad hoc synchronicity at dusk last Christmas Day. The kora happens nightly, so my being there on this Christian holiday was simply accidental, but it added to somber atmosphere as the twinkling holiday lights set the chanters aglow. While watching, my partner and I struck up a conversation with a group of monks-in-training (one of them was a woman) who had come down from the monastery to get their twice-yearly fill of such debaucherous worldly joys as cigarettes, whiskey, and beer–all the while making jokes about how they are still human, after all!

Sometimes I think I use feminism as an excuse to hate on people, as there is a fine line between hating and critique. Alas, I am simply human too. But Kerr’s involvement with KORA rubs me the wrong way. In part, it is because of the uncreative ad campaign (innovative failure is number one on my hit list these days), but I also dislike the convenient co-optation of Buddhist ritual for consumerist purposes that are at best tangentially related to the philosophy, particularly when it’s done by an Aussie woman. KORA will be sold exclusively in Australian department store David Jones, a company for whom Kerr also works as a Brand Ambassador, which makes me question who stands to gain the most from this eco-friendly product launch. Certainly not the environment.

It seems to me that KORA is just another tired marketing ploy intended to get armchair progressives to feel better about emptying their pockets to buy things they don’t actually need, and that this pop-political, celeb-led, uncritical consumption is actually more likely to negatively impact the environment than to save trees for Kerr’s cuddly koalas if you believe The Story of Stuff–which I do.

If celebrities are going to be involved in progressive politics, I prefer their involvement be meaningful and moving, not trite and self-involved. What about you?

Well, she's starting a new product, and the trend today is "natural" and "organic". She's already selling for the consumer-driven market, why not sell out while you're at it? 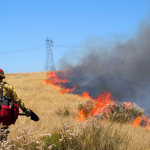 by s.e. smith
Nearly half of California's wildfire fighting crews are incarcerated people—who are paid vastly less than their coworkers.