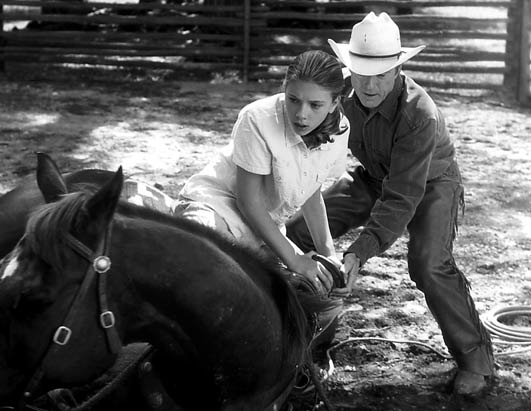 There are two types of cowgirl narratives: Ones with plucky girls whose horses are a symbolic extension of their inner strength (see: Brave, National Velvet) and ones where girls feel unsure in the world and connect with horses who are also healing from some kind of trauma. We talk a lot about how horses help girls with wild hearts, but how is healing a horse like healing a woman?

Let’s look, for example, at  The Horse Whisperer. The smash 1998 film is a story about using natural horsemanship to rehabilitate a horse. Grace (Scarlet Johansson) and her horse Pilgrim suffer traumatic injuries in a major accident. Together they begin the rehabilitation process with the ol’ whisperer Tom Booker (Robert Redford).

Grace is deeply troubled and struggles with not only coming to terms with her injuries, but an unrecognizable, uncontrollable horse after the accident. As Pilgrim heals, so too does Grace. Most notable in the film is a scene in which Booker forces the horse to lie down so that she may mount him safely. The two return to their former relationship. They are restored.

This begins to speak to some important connections between women who have survived traumatic experiences and find healing through work with horses. Equine therapy has been used for a variety of therapy approaches, from treating autism to post-traumatic stress. We probably all remember Ann Romney describing the health benefits of owner her extraordinarily expensive dressage horse.

And horsewomen themselves echo the media portrayals and research of the effectiveness of equine therapy. In her best-selling book, The Tao of Equus: A Woman’s Journey of Healing and Transformation through the Way of the Horse, Linda Kohanov recounts stories of women participating in equine therapy, including abuse survivors. She writes this of her work:

“I emphasized that as non-predatory beings, horses had perfected a way of relating to the world that kept them from being victimized by carnivores. As women, we needed to resurrect this wisdom of the prey for our own protection.”

Though as someone who has experienced violence, I resent suggestions that place responsibility on the victim, I think this hints at a valuable truth about women and horses.

For those of us who carry around a lingering fear we can’t quite shake after trauma, there is something valuable in seeing it manifested in an animal—despite the obvious problems with straddling the line between anthropomorphizing and recognition.

Moreover, women can benefit from working with horses in therapy because they can draw strength from the horses while also identifying with their fear. I know I do. I know the horsewomen around me do. With so many women experiencing violence and trauma, it is unsurprising that they might identify with an animal that not only shares in their recovery—like Grace and Pilgrim—but shares their resilience. 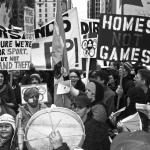