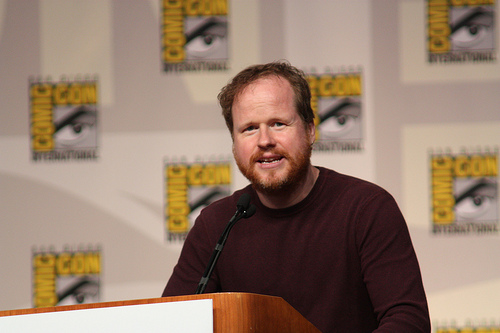 I don't imagine many of you are Dollhouse viewers, not least because the new series by Joss Whedon of Buffy and Angel fame had a rocky ride of a first season.  If you gave up on him, I have a new mantra for you: Joss is always worth the trouble.  Joss identifies as a feminist, and indeed, before anybody scoffs or points to Buffy's short skirts or what have you, I encourage you to read this.

That said, Dollhouse ain't perfect, on feminist or any other grounds, frankly.  I only managed to stick it  out through its initial rough patch on faith alone. See, Fox forced Joss to retool the show and rearrange some plot development early on. This led to some awfully confusing early episodes in which the network's desire to sell the show as Sexy! seemed at odds with Joss's own plans.  The premise of the show being a brothel staffed by people who have, literally, had personality lobotomies, this isn't just in bad taste - it is bad marketing.

But once the show got on its feet, it grew into a reasonably compelling allegory of what the universe is looking for in its sex objects: empty vessels.  The concept suffers, though, when the show gets flip about its context in its  "monster-of-the-week" episodes.  (For example: Dushku saves child from kidnappers; Dushku looks totes hot whilst doing so, although wearing glasses.)  See, the problem with such a creepy premise is that it's hard to ignore it, even for a second.   Cheering Eliza Dushku on, as she adopts the guise of some new personality to solve a murder or save a child, is tough.  I have no problem with moral ambiguity in drama, but the central thrust of the show is so morally unambiguous that even the writers seem thoroughly unsure who we're supposed to root for.  And fables don't operate that welll when they have neither heroes nor antiheroes.

So despite the dramatic strength of the last few episodes, Dollhouse still seems to me to be a little lost.

Further developments are bearing this out.  Last month, at Comic-Con, Joss screened what was meant to be the thirteenth episode of the season, "Epitaph One" - you may now download it at iTunes.  Originally developed to complete a contractual obligation, Fox actually declined to air this episode, although it renewed the show for a second season in a semi-shocking decision  It's hard to find out why, exactly, though Joss himself has said it may have been related to the content of the episode:

"It has a very different structure and feel from what we do on Dollhouse, so it would have been ridiculously startling to have aired it the week after the season finale as just this insane coda," he says. "And it is a little bit insane, except that we sort of follow everything through to its logical conclusion. As always, it's logical to conclude that people are terrible and will try to destroy each other."

"Epitaph One" is a flash-forward and almost operates as a spoiler in and of itself.  There are many points in its favour: it stars the eminently likable Felicia Day (from Joss's internet hit Dr. Horrible's Sing-Along Blog), it gives the entire series a sense of narrative purpose that it previously lacked, it minimizes Eliza Dushku's screen time.  I don't have to spoil much for you to say that the episode immediately introduces a world in which the Dollhouse technology has slowly infiltrated the general population, and there is a war ongoing between "actuals" (who have not yet been touched by the personality wipe technology) and Dolls who have been imprinted to kill them.  From there it devolves into a sort of horror show.  I'll leave the rest for you to discover.

Joss does not, actually have the writing credit for this episode, though it is "based on a story" by him.  But since it is the series' overall direction that I think poses both the most potential and the most problems for the future of the show, I want to ask him: what gives?  Because the funny thing is, by the end of Epitaph One, there is little trace of the themes of rape and violation that threaded through the strongest episodes of the first season.  All of a sudden, the problem is that the Dolls are killing, being employed as soldiers, not that there are Dolls at all.  Not that even the mere idea of using someone else's body in this way is abhorrent enough, that it does not matter who uses the technology and for what purpose: using other people, dehumanizing them
in the way the Dollhouse does is just plain WRONG, any way you slice it, and particularly from a feminist perspective.  So why this shift in the series, to make the ultimate story arc about who is using the technology, rather than the abhorrence of the technology itself?  I suppose it gives the series a better bad guy to go after in the long-term, but this is a strange sacrifice to make in a show that seems to want to reside in gray areas.

Any of you have any thoughts?

Photo from Gage Skidmore @ Flickr on a Creative Commons License.

Hmm - I had a really different take on Epitaph One - I really liked it, and wished that the rest of the show had a bit more of that sensibility (and I completely agree about less Dushku - on paper, her character is intriguing, but her presentation of things bores me).

While the episode definitely pulls back from the rape angle, I think that it more fully addresses the reality of how violating it is to be imprinted - 'Actuals' have one priority, and that's to stay themselves at all costs. The issues of who first fucked up and let the technology loose seemed to me to be almost beside the point; the really amazing parts were where Topher realized exactly what he'd been doing, and the ways in which he and Adele dealt with their complicity.

I'm personally fascinated by their roles - how did they justify their deep involvement in the brothel & 'regular' dollhouse when they aren't morally comfortable with its logical next step? How did leaving the main network of dollhouses play out?

I agree that the show doesn't fully know what it is, yet. Deciding *how* it's going to approach the grey areas is necessary to make the story compelling, and so far, they seem to be flitting about too much to make it really work. I'm staying hopeful, but I'm not sure whether it'll be able to figure things out quickly enough to stay on the air.

To start out, I haven't watched this 13th episode yet, but I'm excited to. My (male) partner and I (a female) felt the same way about the actual quality of Dollhouse for most of the series, although the last few episodes got us really pumped up to see more. What actually bothered me initially was how much man-on-woman violence there was in the first handful of episodes. Even knowing that Joss is a solid feminist and that Dushku's character did always win out in the end - I was still a little creeped out. I'm sure someone smarter than me will have something to say about emphasizing the victim role of women and the violent role of men too much, but I'm still just confused about that bit.

I agree with your point about the shift being from the existence of dolls to how they are used and who is using them and even about more general moral ambiguity, but I do have faith in Joss and I think ambiguity can make for something much better than a fable. I mean look at Battlestar Gallactica - moral ambiguity is what made that show so interesting.

Lastly I just wanted to note that although that speech of Joss' that you linked to was a great testament to strong women, he didn't give any justification to the fact that his leads are always hottie mctotties. The debate about whether dressing sexily is empowering or oppressive is still up in the air, and I'm sure others will have something to say about that, but even so it has always bugged me. In the same sense, with the character of Buffy in particular, I found that it made me like her less and like the supporting characters more, which who knows, may have even been part of his intention.

I'm really really really glad that there are Taras and Kaylees and Novembers in the "verse", but someday I'd like to see them as leads. Then again, if Joss did that, he probably wouldn't even get on television again. It's an unfortunate trade-off.

The side characters were simply fascinating. Topher and Dr. Saunders often stole the spotlight, and I wished that Whedon paid more attention to the other characters without involving Echo all the damn time.

To me, that was the strength of Epitaph One. Finally, we ignore Echo, recognize that while she is important she is not necessarily central to every character's development, and play with the larger story.

I'm not sure how Whedon will be able to continue the story after the thirteenth episode, and I really hope it won't be one of those "Alternative dream reality!" deus ex machina tricks, but I really hope that he pushes Echo away for a while and starts giving some well deserved time to the rest of the cast - who are so much more interesting than our leading heroine.

by Dahlia Balcazar
An unusual and perfect opportunity to mess with Donald Trump has presented itself.