Don Draper: The Most Influential Fake Man of 2009 | Bitch Media

Don Draper: The Most Influential Fake Man of 2009

Yesterday, my bf emailed me an article from the consistently obnoxious and terrible men’s site askmen.com. Apparently, the hard-hitting journalists working over there were interested in determining the Most Influential Man of 2009, and the winner (chosen through a reader poll) was Mad Men’s fictional philanderer Don Draper. You know, because television characters should really be the most influential people in our lives.

At any rate, my beau found the news of Draper winning this award even more ridiculous and upsetting than I did, so I asked him to write a brief response to the article from The Male Perspective. Here it is:

Don Draper: The Most Influential Fake Man of 2009 by Jacob Dittmer 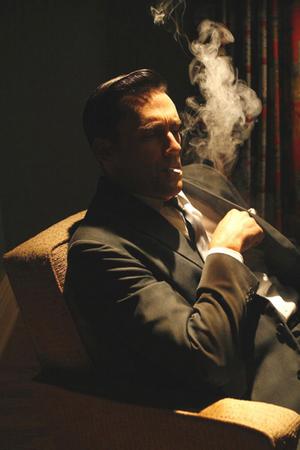 Piggy-backing on the Mad Men obsession that is sweeping the TV-watching nation, the douchetastic askmen.com has announced that Don Draper is today’s “Most Influential Man.” Sorry Barack Obama (#3), you’ve been beaten by someone with more power and influence than you could possibly imagine: A fictional character!

I’ll accept that Draper (and more broadly Mad Men) has influenced modern American life in that Sunday evenings are locked up for many (I know mine are) and fashion lines are striving for that 60s look (not a bad thing). What I won’t accept, however, is that Draper’s behavior is influential for countless actual men across the U.S. I somehow doubt that men are contemplating how they can desert their former lives for a newly constructed identity (as Draper himself has), lying to everyone in their wake. Though Draper is firmly established in his career and family, he has a shadowy past which calls into question his honor, values, and motivations as a man. An extremely compelling aspect of the program? Yes. Influential? I hope not.

The asshats at AskMen rationalize him as “value-driven” and “a temptation-swayed philanderer who truly wants to be a family man.” Um, what? How are frequent and continuing affairs with women “value-driven” and qualities befitting a supposedly devoted family man? Am I the only one who has noticed Draper’s complete disinterest in his children, let alone the feelings of his wife? This season has shown him acting as more of a father to his children due in part to a potential affair with Sally’s teacher. (After all, he’d better show up to chaperone that field trip if he’s going to get in his daughter’s teacher’s pants!) Did AskMen recall how close he came to abandoning his career and family last season? His sojourn through southern Cal without a thought for his children? Yeah, I doubt it.

What AskMen is really veiling in its praise of Draper’s persona is that many of these voters (and the editors?) envy his ability to have sex with extremely attractive women without an inkling of remorse — well, that and his alcohol tolerance (and the chain smoking). Sure, they can shroud their claims of influence in discussions of the old-fashioned values of chivalry and honor he represents, but AskMen is neglecting the very critique of those values offered up by Mad Men’s writers. It seems that the average AskMen viewer is interested not in thinking critically about a nuanced character, but rather in making tons of money and screwing every sexy broad in a skirt.

Obviously the show is gaining in popularity with each successive season, and perhaps AskMen was jumping on the Sterling-Cooper bandwagon with this poll. With this popularity comes the grander problem of audience reception and recognition (or lack thereof) of the show’s critique of the 60s culture that it portrays. I don’t believe Matthew Weiner (the show’s creator, and perhaps the man behind the most influential man in America?) intends to praise American culture’s historic treatment of women, African-Americans, or the unhealthy practices of chain-smoking and cocktails at 10 a.m. Mad Men is a nuanced, realists’ vision of a not-so-distant past with customs that still resonate in contemporary culture. Perhaps Weiner and his staff are asking the question: How far have we come in our society’s treatment of women? How far do we still have to go? I am asking the question: Does everyone at AskMen have his head up his ass?

Regardless of his questionable values, Don Draper is also fictional and should not be treated as a flesh and blood man. The site claims Draper is “just as real as any person on this list” because TV characters are like “celebrities…with carefully constructed images.” The difference is those celebrities we admire are still real human beings, not composite characters or fabrications of a creative mind. When Draper screws up, it’s a scripted storytelling device. When Kanye West f*s up, it’s because “Beyoncé had one of the best videos of all time!”

The explanation of the polling does little to explain what an “influential man” is, but based on the list, influence means fame, wealth, power, and superior athleticism (oh, and sexiness). Though my initial disgust with this survey was largely a reaction to the unsavory Draper, I was equally dismayed by the lack of diversity on the list (save for athletes, music stars, and second runner-up Barack Obama). Unfortunately AskMen has done very little to present an alternative to the white, male-dominated world. According to the site, more than half a million readers responded to the survey. It’s interesting to note that of the two scores (voters and editorial) used in this poll, the editors scored Draper higher than any other figure (perhaps they intentionally wanted him at the top).

The closest the article comes to offering up an honest rationale for Draper’s influence is in their description of him as wholly human “trying to reconcile morals and desire.” Do we really need a fictional TV character to remind us that we are all flawed/conflicted human beings? I think a bit of self reflection is all it takes. Now that would be influential.

It's a fair point that AskMen readers may not be able to decode the nuances that make Don Draper <i>Don Draper</i>, and may have made him number one for all the wrong reasons. But it needs to be said that most of humanity was built on things that aren't flesh-and-blood real, but are used as representations of real life. Art, music, books, religion, politics and every ideal. None of that stuff is real either.

AskMen is a horrible site with plenty of problems, but is this really one of them?

Indeed, I agree and am equally interested in the ontology and art/media. What really bothered me was the site's choice of him as the sole "fake" person on the list when there is a variety of TV, book, etc., characters who are more honorable and "influential" than Draper. I was mostly perturbed at the site's emphasis on his "values" and infatuation with a lifestyle (womanizing) that I would like to think (but know to not be true) didn't exist any more. He is a complex figure, one that I personally enjoy observing and analyzing, but so is Tony Soprano and Al Swearingen (Deadwood), and I hope men aren't emulating them.

Every man wants to be Don Draper: corporate big wigs are after his professional skills and gorgeous women are after his bod. He's handsome, rich and maverick enough to chuck it all on a whim.

What's more interesting is how many women lust after the guy. What is it about womanizers that charms us all to pieces?

What's scary is how many men want to be a neglectful, emotionally unavailable man like Don. But most frightening is a response I got to a blog I wrote about womanizers like him. In a comment, a man called me both the "c" word and a bitch, further proof that Draper and "Ask Men" fans may not be the best spokespeople for men.