Back when I went to see The Last Exorcism (a disappointing movie that completely fumbled what I thought was a great set-up) I remember watching the scene in which the disenchanted minister describes the death of an autistic boy during an exorcism and thinking, “That’s a movie I might watch. That could be a really tense and disturbing film, wherein a nonverbal protagonist has to resist zealous guardians who think he’s possessed.”

In mainstream film, autistic characters appear most frequently in two types of movies: award-grubbing dramas and horror films. As far as I know, there are no horror films that center an autistic protagonist. As in other genres, autistic characters in horror movies tend to be plot devices. The savant archetype makes a frequent appearance, and in this fanciful genre savant skills might manifest as otherworldly powers. Stephen King’s Rose Red and the poorly made Dark Floors both feature young autistic girls with a special psychic connection to otherwordly forces. In both movies the autistic character possesses knowledge and power beyond the capacity of the other characters and becomes a kind of savior, but both characters are defined solely by that role and otherwise are given no depth or arc. The religious-themed Bless the Child also features a young girl in tune with unearthly forces, but while she is diagnosed with autism the film suggests that she isn’t “really” autistic and that her unusual behavior is caused by her powers. In Cube, the character of Kazan (who is an adult, unlike most other autistic characters in the horror genre) is a mathematical savant whose skills are harnessed by the other characters to navigate their way out of a fantastically elaborate trap. Again, Kazan otherwise is given no personality or arc, but at least he is rewarded by being the only character to survive and escape at the end of the movie.

Not all portrayals of autistic characters in horror movies are so disappointing. I really enjoyed the story in Trick ‘r Treat that features Rhonda, a clearly autistic girl (she’s described as an “idiot savant” in the film) who becomes the target of a cruel prank. Under the guise of kindly including her in their festivities, a group of other children convey Rhonda to the edge of a gorge that, according to legend, was the site of a ghastly event wherein a bus driver sent a bus full of disabled children to their death at the behest of their parents. The kids stage an attack by the “ghosts” of the drowned children, terrifying Rhonda. It transpires, however, that the actual ghosts of the murdered children rise from the depths to attack the pranksters. Despite their pleas, Rhonda coldly refuses to help her antagonizers  and makes her escape as the ghosts (ghosts of her peers, of other kids “like her”—let’s be frank) exact her revenge for her. (The ghosts also eventually take their own revenge on the still-living bus driver.)

Rhonda doesn’t exactly have any “powers,” but in a movie that’s all about the spirit of Halloween and being in or out of tune with it, Rhonda is portrayed as very much in sync with the season. She acknowledges and is acknolwedged by the forces that are afoot, without coming to any harm. It is as if she belongs, as if she is a monster herself. The film isn’t “deep” or brooding overall, but it does comment on the fact that, culturally, autism and disability in general are constructed as otherworldly and even as monstrous.

Given the ubiquity of autism and the nature of cultural attitudes toward the condition, I would have expected an autism-themed horror film by now. Horror has the wonderful ability to hold a mirror to society’s deepest-seated and unspoken anxieties, to play on them and critique them. So where is the horror film that’s about autism? How about a film with an autistic protagonist? An adult autistic protagonist? What do you think: What plots and scenarios might you like to see played out in an autism-themed horror movie, outside of the tired trope of the child savant?

Previously: Adam: “More Like a Child Than Anything Else,” A Peek at Autism Speaks

this is a wonderful series of posts! i'm really enjoying it - my knowledge of autism is extremely poor, and of course even worse of autistic people as depicted in film. i think i saw a french documentary when i was younger about a rural (travelling, i think) primary teacher who taught an autistic girl (not older than 10) in a tiny village, among other children. from what i recall it was very good - maybe you've heard of it? i can't remember the title. keep up the good work!

ok i found it, it's called Être et avoir (To be and to have), it was released in 2002 and here's the trailer (no english subs unfortunately): http://www.youtube.com/watch?v=Fu7_LRxDNsU&feature=related

"I remember watching the scene in which the disenchanted minister describes the death of autistic boy during an exorcism and thinking, "That's a movie I might watch. That could be a really tense and disturbing film, wherein a nonverbal protagonist has to resist zealous guardians who think he's possessed.""

This actually happened to my roommate. Twice. To quote her: "Waterboarding with holy water is still waterboarding."

i'm not sure i agree that rhonda is a "monster herself". with the other female driven storyline, about the werewolves, while the werewolves are monsters, they are also kind of the heroes of that story, not unlike rhonda. i think the audience ends up identifying with rhonda, which is not the usual treatment of autistic characters. the other kids come off as the monsters, because in trick r treat, the spirit of halloween is, not the 'good', but at least the 'what you are supposed to value'.

OMG. I have to thank you for pointing out Trick'r Treat. That's exactly the sort of thing I want to watch. 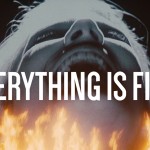