When I first went to see True Grit in theaters, less than ten minutes into the film one of my companions leaned toward me and, referring to the young protagonist, whispered “Do you think she’s a little bit…special?”

Mattie Ross (portrayed by Hailee Steinfeld) is so compelling and memorable because she is so odd. In my previous post, I brought up the idea of “finding” autism in narratives and texts that do not make explicit reference to it. Mattie’s eccentricities are characterized by what I would call “autistic difference” but, given the nature of the film, my aim is not to read autism onto Mattie. “Autism” as a contemporary construct does not fit into the era in which the film is set, though of course True Grit is not a historical drama, it is a Western. The film is a parable set in the “once upon a time” of the wild west, in an American otherworld divorced from historical reality. It is a contemporary myth. As such it defies—I might even say transcends—the rhetorical trappings of contemporary medical discourse. I nonetheless wish to approach Mattie Ross as something of an autistic protagonist, but my goal isn’t exactly to “diagnose” Mattie with autism—I want to map Mattie onto autism, and thereby enrich and introduce a mythic sensibility to the idea of the autistic narrative.

Stuart Murray presents the concept of “autistic difference” in the first chapter of his book Representing Autism: Culture, Narrative, Fascination. While autism is certainly understood in a medical context as a neurodevelopmental condition with distinct diagnostic criteria, Murray asserts that the word and concept has “increasingly become untethered from this kind of attempt at precision.” As a cultural construct, as a notion, “autism” has taken on a life of its own. The concept is rich with meaning and associations completely separate from its medical criteria. For example, autism is signified in popular culture by savantism, and often by close association with “geek culture” and computer technologies. Neither of these attendant concepts has any part in actually diagnosing the condition.

Beyond—but including—its medical aspect, “autism” is really a means of describing and categorizing certain kinds of behavioral difference. The character of Mattie Ross embodies the kinds of behavioral qualities and quirks that are culturally associated with autism, and other characters in the film make it clear that she is considered extremely odd within the fictional world that she inhabits. She does not speak or socially interact with others in a way that is developmentally or culturally “appropriate” for a fourteen year old girl. Her vocabulary is prodigious, but she is blunt to the point of being rude. While crafty, she is unyieldingly stubborn and gets her way in negotiations not through any special savvy, but through sheer, relentless force of will. In fact, her constant talk of the law and lawyers is a kind of social script, and she falters when that rhetoric fails her. While she usually appears rational and detached—she displays no emotion upon seeing her father’s corpse at the start of the film—Mattie shows unexpected affection toward her horse and eventually forms a bond with US Marshall Rueben “Rooster” Cogburn (Jeff Bridges), whom she has hired to help track her father’s murderer. Her quest to hunt down her father’s killer appears at first to be an obsessive pursuit of legal justice, but it is revealed to be something deeper and far more tragic. Mattie isn’t exactly seeking vengeance; while she relishes the moment before she finally kills the murderer, her goal isn’t really to make him suffer. What she really wants is her father back. Given her rigidly limited view of the world—a view formed and articulated through the clear, concrete language of law—bringing her father’s killer to justice is the only way Mattie knows how to channel her grief. Of course neither justice nor revenge can revive her father or allay her grief, a moral which is driven home in a heartbreaking sequence that follows the climactic showdown. True Grit—like all good revenge narratives, I suppose—is ultimately about loss. The confrontation and internalization of loss are what shape Mattie’s character arc. In the film’s epilogue she has grown into a woman defined by and yet defiant of that loss. A previous guest blogger here at Bitch took exception to the portrayal of adult Mattie, describing the ending as “abrupt, awkward, and out of nowhere.” I respectfully disagree, and I also disagree with the assertion that the epilogue is somehow unnecessary. Mattie’s “spinsterhood” signifies her general solitude. Her inability to fully express or process emotional attachment—a trait that defines her throughout the film—means that she is alone. It is not that she is “cold.” The catalyst for the entire plot of the film is her love for her father, and the epilogue reveals that she has a similar love for Rooster that endures through the decades since their adventure. It is not Mattie’s spinsterhood in itself that is “unfortunate;” what is unfortunate is that a woman who feels so deeply is compelled to live a life of solitude because she is perceived as cold. Yet the tone of the ending isn’t wholly tragic; Mattie is just as frank and fiery as an adult as she was at fourteen. While she does not appear to be exactly “at peace” (who is?) she is not a haunted or broken woman. It was simply inevitable that Mattie would never quite fit into the world, and that inevitability is part of what makes the ending so moving.

So what does Mattie tell us about the potential of autism as a narrative device? Certainly it’s problematic that her “autistic” qualities condemned her to a life of solitude, but that’s assuming that she really was “condemned” and that being alone means being lonely. She never married because, as she puts it in the voiceover at the end of the film, she “never had time to fool with it.” The only other clue we have about her interpersonal life is that some people apparently consider her a “cranky old maid.” Why discount Mattie’s agency and her choice to remain autonomous?

Overall, Mattie Ross is a compelling heroine at the heart of a mythic story about revenge and loss. The trajectory of that story hinges on her eccentricity, on what one might consider “autistic” strangeness or difference.

It's interesting that I read this article after finally seeing the 2010 remake of "True Grit"-and I didn't like it as much as the 1969 version (even though it is much grittier) because I felt that there was no chemistry, connection or warmth between Hailee Steinfeld and Jeff Bridges as there was between John Wayne and Kim Darby. 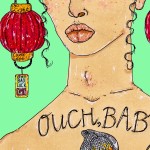 by Sarah Mirk
We look into patterns of dismissing, demeaning, and disbelieving women's pain.