The ACLU is suing this week’s Douchebag Decree recipient for being a gigantic douche. OK, so Austin Couch, principal of Churubusco High School in Indiana, is actually being sued for free speech violation, but that’s just lawyer speak for douchiness, right? At any rate, Principal Couch suspended two CHS sophomores from all extracurricular activities last month because they posted photos of themselves on their MySpace pages looking too darned sexy. He calls it principal-ing, but we (and the ACLU) call it slut-shaming. 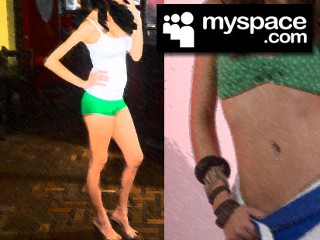 You girls are officially suspended for having bodies!

The girls in question took the “too hot for teacher” photos during the summer at a sleepover. They claim that the lollipops and lingerie used as props in the pictures were meant to be “a joke” among friends. Hence their posting them on their PERSONAL MYSPACE PAGES and not say, postering the school with them. And honestly, who cares whether or not the photos were a joke? Even if the girls were trying to be as sexy as humanly possible they were doing it outside of school, during a season when school isn’t even in session! Be as sexy as you want, girls!

The real problem here, of course, is that Principal Couch and his ilk can’t handle the fact that these young women have bodies and that those bodies might be (gasp!) sexual in any way. We are still living in a culture where women are punished for their sexuality, especially young women. Suspended from extracurricular activities? Why? Because they might spontaneously start humping someone during a volleyball match? Puh-leez. It’s not as if this is a gender-neutral policy, either. What is Couch going to do, start suspending every guy who gets a boner in homeroom? Doubtful.

So congratulations, Principal Couch. You’ve now got a new title, and it’s Douchebag.

For more of a discussion on slut-shaming ‘round the world, listen to Andi on yesterday’s “World Have Your Say”!

Frankly, I don't think it was any of this guy's business what the girls did. If he had concerns, the appropriate thing to do would have been to alert the parents. This is a matter between parents and children, not the school and children. If they had used school property, such as a camera, then it would be reasonable to punish them for misuse of school property. However, what they do out of school is their problem.

I'm glad my school hasn't done anything like that (yet.) I'm careful with my files, but I have plenty of data on the web that I don't want scattered around the school. Anyways, I absolutely approve the douchebag decree on Mr. Couch's finger of slut-shaming.

Why the hell was this *adult* high school principal even looking at sexy pictures of teenage students? Why was he even on their myspaces? To me, the latter is already a violation of what might be considered appropriate student-teacher/employee relationships, particularly if this guy is just browsing through these girls' pictures. Also, my friends in high school loved to name their picture folders with very descriptive (sometimes "explicit") titles. I'd be willing to bet that these girls did the same, which would warn anyone wanting to check out the pictures inside of the material. Not only is this guy a total douche, he's also a creep, and I would want him out of the school if my child went there.
~tabitha~

Apparently the girls' MySpaces were private, and someone who was "friends" with them on MySpace actually sent the pictures directly to the principal as a complaint - he didn't happen upon the photos during a MySpace browse. But he's still a douchebag.

He wasn't on myspace and i really doubt he wanted to see the pictures. A parent printed them off and brought them to his attention. ooo the internet.

I'm saddened that this story lost its message halfway through. It doesn't matter whether it's socially acceptable for teens to exhibit sexuality. A private activity on a personal site, unrelated to school cannot be grounds for suspension; period. Even in incidences of drinking and drug use posted on the web can an athlete or member be removed from an extra-cirricular because they signed an ethics waiver. That's the BS, there's another place and time to debate whether the girls have the right to be sexual, which I'll add I do agree they have.

The <a href="http://www.aclu.org/" rel="nofollow">ACLU</a> was right on the mark. Whatever happens outside of school, ESPECIALLY with respect to free expression is outside of the school's jurisdiction. There seems to be no shortage of authoritarians trying to nullify every conceivable freedom. It's bad enough that they go after the unenumerated rights (like the pursuit of happiness) in violation of the Ninth Amendment. They go further toward totalitarianism by using by the listed rights to disparage the rights that are NOT listed. Next they use the listed rights to disparage the other LISTED rights. Then they chisel away at each listed freedom individually, trying to insert one exception after another to each freedom. Finally they try to enforce their own vision of uniformity and narrow mindedness on everyone else. The biggest problem with what this principal did is that it gives young people the impression that they should not expect freedom in this country and teaches a general disdain for the Bill of Rights.

by Erika Moen
The nonfiction book The Sex Myth looks at the gap between fantasy and reality.