Okay, okay. Before you and your platonic best friend get all up in arms, in no way does this week’s Douchebag Decree have anything to do with friendships between people of any gender. Friendship is super and in no way douche-y, obviously. However, this week’s dishonorable honor is being awarded to the term “bromance,” which is on everyone’s lips this summer (and for the past year) and is not doing male (or female) friendships any favors. For evidence of this, check out this CNN person-on-the-street video:

Finally platonic male relationships are getting media attention, right? Because it’s not as if practically every single movie made for the past four decades has been about that very topic. Also, it’s great that we as a culture have coined a precious term for this relationship, because it is not already revered enough by everyone. Also, IT’S TOTALLY NOT GAY AT ALL YOU GUYS. SERIOUSLY. REMEMBER THAT MEN WHO HAVE FRIENDS ARE NOT GAY. You know, because guys can’t have close relationships that don’t involve sex unless they can call it something that indicates its so-not-gay-ness. Sheesh.

Of course, men openly expressing their love for their platonic friends is a great thing, so maybe the term bromance isn’t all that bad after all? If it takes a cheesy pun to encourage emotional openness, then so be it. Bromance is a complicated thing, right? Of course, it’s still getting the Douchebag Decree, but maybe there is more to it than meets the eye.

Yes, friendships and relationships are complicated. So are gender norms, and men are certainly not encouraged by society to hug one another and say “I love you” because it’s so, you know, un-manly. But compartmentalizing male friendships and labeling them as “bromances” might not be the best way to normalize man-on-man friend behavior. Why not just let them be friends and leave it at that? We don’t require women or queer or gay people to come up with catchy terms for their platonic friendships just in order to make them acceptable to the rest of the culture; we just call that “friendship.”

Also, the “bromance” mentions in the media are getting about as hard to take as the star of the television show Bromance, Brody Jenner (no thanks, MTV). It seems like everyone with access to a camera or computer is dropping the word “bromance” whenever they get the chance. (Maybe they think it’s what the kids are into these days?) Movies like I Love You, Man (which, as a personal aside, I loved), Pineapple Express, and The Hangover are just a few examples frequently given by the bromance-crazy media as to why bromantic comedies are worth talking about. Says Ramin Setoodeh of Newsweek (that’s right, Newsweek is blogging about bromance):

Buddy comedies are nothing new, but the bromance shows us that straight guys, even without the aid of a high-speed car chase, can bond almost as strongly as heterosexual lovebirds. To succeed, a bromance must walk a fine line. It must lightly indulge in gay stereotypes, but never in a mean-spirited way. The bromance allows straight men to share their feelings—or, in Superbad, their sleeping-bag space—with their buddies without fear of ridicule by the audience.

But shouldn’t men be allowed to just be friends without fear of “ridicule” from the audience? Why are we still so worried that we won’t allow men to be close to one another without giving the relationship a douche-y name and specifying that it’s NOT GAY? (Answer: rampant homphobia and constructed masculinity)

So yeah, the term “bromance” is getting mighty old mighty quickly. And, of course, there is practically no need to mention the fact that “bromantic comedies” leave women on the sidelines, since bromantic comedies are all about dudes, dudes, and more dudes. Still, if it’s normalizing friendships and helping pop culture to ease up a bit on the ol’ homophobia, then maybe it’s a good thing? I mean, it’s still getting this week’s Douchebag Decree, but please weigh in if you think the award should have gone somewhere else and left bromance out of it. Take the poll, and leave your comments! Love you, bros.

I find the "bromance" thing to be rather poisonous, though most guys I know tend to use it in a very ironic way, like "this is a ridiculous term and we don't need to give a name for our close platonic relationship just to qualify it, but we will still say 'bromance,' just to be silly." but maybe not everyone uses it like that.

This post was reaching. I agree with you Laura, "Bromance" is a silly term that should be taken lightly. Just because CNN reports on something doesn't make it important. I guess everyone struggles for informative topics from time to time. 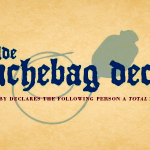 by Robyn Pennacchia
It's almost hard to be truly angry at this type of douchebag. Almost.