Indiana Governor Mitch Daniels defunded Planned Parenthood of Indiana on Tuesday. As if this fail couldn’t get any worse, speculation surrounds Daniels’ intent as to why he signed the bill. And why did he? To quell über conservatives ruffled by Daniels’ laissez-faire stance on social issues such as reproductive health. You see, this 49th Govern, er… Faux-ernor of the State of Indiana said he could win the 2012 Republican presidential nomination. No formal statement has been made by Daniels himself but his douche-y actions speak loud and clear. And, loose lips are talking. House Speaker John Boehner—not boner, bay-ner, Ohio Republican Rep.—told Matt Lauer on Tuesday’s NBC TODAY show:

[Mitch Daniels] has got a real track record of reform in [Indiana] the kind of reforms we need to have in Washington, D.C.

Not good, my friends. Not good.

The only thing stopping Daniels from announcing a run for presidency is his family. Stop… Hold up… Tag Team! His family? Yes. His family. And he just cut 22,000 people off from family-planning and health services in Indiana? Yes. 22,000 low-income people, according to Betty Cockrum on NPR, president and CEO of Planned Parenthood of Indiana (PPIN).

On NBC Indianapolis, Faux-ernor had this to say about what’s holding him back:

It’s no secret that family comes first with me and that’s a consideration [for presidency]. This is not a mountain you jump off by yourself, you take others with you and that matters to me.

OMG! Daniels is a Douche and a selfish SOB. [politely refrain from taking SOB to heart—it’s Daniels we’re discussing, not semantics—thanks!] That’s a gubernatorial-cum-douchernatorial move—two times! Once for cutting funding to PPIN, the state’s largest reproductive health care provider with 28 locations. Twice for not giving a lizard-lickin’ care about the nearly 6.5 million people (and their families) living in Indiana—thousands who rely on PPIN and the many more who might in the future Phooey!

There has been a recent rise in anti-abortion restrictions in the U.S. In South Dakota, people who request an abortion must wait three days before the procedure. In Texas, an ultrasound and verbal description of the fetus are now part of abortion protocol. However, Daniels’ douche-y dis is the first of its kind to eliminate all funding to PPIN. And how much is that? An estimated $1.4 million according Kate Shepard, PPIN spokesperson.

HEA 1210 is about abortion. And yet, according to a 2010 Planned Parenthood Federation of America Fact Sheet, Planned Parenthood abortion services accounted for only 3% of the organization’s total patient care in 2008. Most people who went to Planned Parenthood that year needed contraception (35% of total services) or STD & STI testing / treatment (34%).

Okay, well brace yourself for PPIN’s numbers on abortion for 2010. PPIN performed 5,580 abortions or .08% of the total population, which is less than one-tenth of one-percent. Really, really insignificant. Pap tests, breast exams, and STD/HIV tests accounted for 96,091 of all PPIN services—that’s 1.5% of the total number of Hoosiers who sought these services in 2010. I guess Daniels didn’t bother doing his math homework? It’s as easy as searching for PPIN 2010 Annual Report on the Internet. And he’s considering running for president? The new bill stripping funds from PPIN is but one of 80 other legislative acts the Faux-ernor signed into law on Tuesday. Other hot measures include immigration reform, corporate income tax, and gun possession. There’s no need to go into detail on what the Faux-ernor signed off on… just use your imagination.

Get this though, Daniels did ban texting while driving  and commended the state on its new automatic taxpayer refund. So… [I’m just trying to work this one out] Daniels wants Hoosiers to practice safe driving and have the extra cash to pay the $500 citation if they get caught texting, but not practice responsible reproductive activity? Nor be able to afford services to prevent unwanted pregnancies and STDs / STIs? Doh! Douchebag.

Faux-ernor Daniels claimed there are other options available for the women and men in need of low-income health care, such as rural health clinics and community health centers throughout Indiana… Uh, since when is Planned Parenthood not considered a clinic + health center? Oh, yeah! Since the Faux-ernor said so. I call bullshit! Planned Parenthood is the only organization being targeted in this bill.

PPIN was quick to respond. With the help of the American Civil Liberties Union (ACLU) of Indiana, the 90-year-old organization declared the bill unconstitutional. The ACLU went to court on behalf of PPIN Tuesday to stop it. And, while I was writing this decree Wednesday afternoon, I learned that U.S. District Judge Tanya Walton Pratt rejected PPIN’s request to temporarily stop the bill only a few hours earlier. According Judge Pratt, defunding takes effect immediately. Sigh! This one really hurts.

Here’s what PPIN and the ACLU of Indiana had to say in response to the new law and Pratt’s ruling:

The ACLU of Indiana believes HEA 1210 deprives Medicaid patients of their preferred health care provider—a clear violation of federal law. It also denies PPIN contracts and grants involving federal money solely because it provides a constitutionally-protected procedure. Finally, it would force PPIN’s health care professionals to make statements to patients that are not medically and scientifically based—further violating the U.S. Constitution.

You can read the rest on PPINs website. An injuction hearing is set for early June. In the meantime, ditch the Mitch. He’s a Hooiser Loser.

"In Texas, an ultrasound and verbal description of the fetus are now part of abortion protocol."

Yeah, Daniels is a douchecube, but that line was kind of the most disturbing thing in this whole article. That is so sick and gross.

'Cause we all know the way to stop abortion is to lower access to contraceptives.

Oh and lowering access to pap smears will probably keep women from dying of cancer too. Please.

Don't you know that we can also discourage kids from having sex by not telling them about sex and reproduction? Just like we can discourage overeating by not teaching kids about the digestive tract!

Brilliant logic. (I am not making a fatphobic statement--I'm merely using the kind of logic that people like Mitch have presented.)

I really, really wish I still voted in my home state. He makes me sad and angry, and there's a reason why so many Hoosiers sport "Ditch Mitch" bumper stickers.

... so "Ditch Mitch" bumper stickers do exist? Cool. The next best thing you can do Kate, is to spread the word to your friends & family back home - encourage them to get out and vote. Thanks for responding!

Fund cutting for Planned Parenthood and abortion services goes hand in hand with the budget axing of social services in my state of... gulp.... Arizona. While nation wide tax breaks for the wealthy remain in tact, social services such as welfare are primarily made up of women (I think 90%, or so), and they are getting the ax. I can't help but feel that this is an attack on women nation wide. Why, you ask?? I answer that it must have a lot to do with capitalism's high resistance to paid maternalism. Why pay for what you can get for free?? Why pay for low income women's family planning when we could just slash it and keep our exploitative and cheap labor in tact?? Capitalism and the conservative agenda go hand in hand. Also, fundamental religious values get in the way of... well, people doing there job which is serving constituents. No matter the facts or numbers behind Planned Parenthood's services; this is much bigger than the 3% of abortions they do each year. Class warfare with sexist and racist undertones.

... be heard instead. You're right, "this is an attack on women nation wide," and an attack on female biology. Thanks for responding!

"Finally, it would force PPIN’s health care professionals to make statements to patients that are not medically and scientifically based—further violating the U.S. Constitution."

Can someone clarify for me what this is referencing, or what sort of scenario this would entail?

The state of Indiana is forcing health care providers to alert women seeking abortions that abortions could cause infertility. Which, as Jon Kyl would say, is not intended to be a factual statement.

You guys sound like little children throwing tantrums because the majority of people don't see things the way you do. I find it somewhat ironic that someone who calls themselves "Bitch" would call the respected governor of Indiana a "douchebag". Whatsamatter? Are all your union buddies in other states enjoying power that rightfully doesn't belong to them, and you aren't? Or is it that what is true and right has finally come home to roost, and you don't like it? You hypocrictically call out Governor Daniels for considering not only his family, but thousands of others to be destroyed by eugenics. (Look it up, it's what those who support abortionists have as a goal for society -- the engineering of a better society through genetics.) Planned Parenthood's founder, Margaret Sanger, by the way, was the original cheerleader for eugenics, and only publicly abandoned her position after Hitler's own attempt at eugenics with his death camps failed so cruelly and so miserably in a most public way in 1945. I don't know if the Governor's defunding order is legal or not ... I hope it is found to be so. Planned Parenthood does absolutely no social good whatsoever. And you call him a "Faux-ernor" (I suppose you think you're clever, but you're not ... no possible pronunciation of "faux" could possibly fit in the context you seem to want it to mean), but an overwhelming majority of Hoosiers elected him governor. So who's right and who's wrong? You little crybabies certainly aren't in the right. Your fellow Hoosiers keep on telling you so. The last time, it was by a 59 to 41% margin -- if that isn't a landslide, I don't know what is. Just wait for November -- it doesn't take a Nostradamus to predict that Americans are going to reject socialism in a resounding ejection of Barack Obama from office and his sycophants in the Senate. 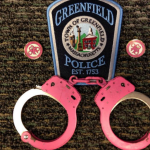 by Susan Sered
Nothing says "awareness" like a pink police squad car.