H&M is taking fashion douchebaggery to the next level this week by using computer-generated models in its holiday lingerie campaign. As if the photo shopping, airbrushing, pushing up, and sucking in that goes on in a typical yuletide bra commercial wasn’t enough to make the average shopper want to throw on a snuggie and call it a day, now the models selling us our delicates are actually virtual. Couldn’t they at least have mixed the poses up a little? Come ON!

According to Swedish newspaper Aftonbladet, H&M fully admits to using computer-generated models for the campaign. As Jennifer Ward, a rep for H&M, told Fox News 411, “The virtual mannequins are used in the same way as we use mannequins in our stores for ladies wear and menswear,” meaning that they’re just for displaying garments and are not meant to represent actual people.

I call shenanigans, H&M. If these robomodels weren’t meant to represent real women, why use “facial models” to give each one a human face? Why bother changing the skin tone and hair on the virtual bodies you downloaded? If these CGI bodies are just meant for clothing display, why have fake women wearing them in the first place?

Regardless of their intention, the use of computer-generated models takes the already-narrow standards of beauty promoted by the fashion industry and whittles them down to a tiny toothpick. Especially because, through the magic of technology, H&M is making it look like lots of different women just happen to have IDENTICAL bodies. What message does that send? Not only that you, person shopping for cheap lingerie online, don’t look like these models—but that EVERYONE ELSE DOES. Here is a screen shot I just took from H&M’s website: Ahahaha! We’re just hanging out, having the exact same body! What, you don’t look like this?

As savvy feminists like us know, photo shop and digital image manipulation are more popular with the media than Jennifer Aniston pregnancy rumors, and some might argue that this is a logical next step in their march toward the obliteration of real bodies. Those people may be right, but that doesn’t make it any less douche-y. Instead of forcing every consumer to get a photo alteration detector and take every bra ad she sees with a grain of salt, H&M, how about using real people in your lingerie ads?

Yea, the virtual model thing creeps me out a whole lot. If they just want to show the garments then they should use the also unrealistic mannequins. Creating human faces, varying skin tones, haircuts etc is adding a new dimension.

The only way I'd be ok with virtual models is if they allowed for customization. You'd be able to put in your measurements to see how it would look on your size.

At least make them realistic, ya know? I understand that waif-like bodies are used in fashion because of how the clothes lay, but I'd be much more likely to purchase something if they had a size 8/10/12 woman modeling it.

Plus it's strange... this is the mainstream standard of beauty that's sold to women... yet most people who are attracted to female bodies don't find these images appealing. It's a strange game they play.

I agree that I would be down for this if I could change the mannequins measurements to match my own, or at least the size of the garment. I'm so tired of looking at clothes on people whose bodies are not at all like mine - that goes for plus size models too. It's just not helpful because clothes look radically different on different bodies.

That would be SO COOL to be able to enter our measurements, because it could recommend what size you would wear by that brand/store, too! I think stores don't want to do this because 1) instead of a dynamic measurement system, they'd just stretch or shrink the default model, which would look like shit (because as a size 12, I'm not just an inflated size 2 thankyouverymuch), and 2: because they'd have to (tacitly) admit in a lot of cases that their clothes are generally cut to only look good on digital, unlikely-proportioned women.

That all being said, any company that let me enter my measurements or size and showed me at least an APPROXIMATION of how the clothes would fit on someone in my size range would get so much business from me. Clearly the tech is there to achieve this.

I came in here to comment exactly the same thing re: customization.
If we came up with it just by reading an article why can't they?

H&M can do whatever they want. It is my favorite store. I get so excited to go to New York every year to shop there b/c they don't have one in Charlotte, NC where I live. Come to Charlotte H&M!! 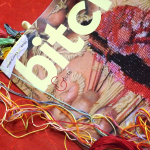