Larry Summers and I go way back. He first caught my attention back in 2005 while we were both living in Boston and he, while serving as the President of Harvard University (hold your applause), said in public that the reason why we don’t see as many women as men in the fields of math and science is perhaps because they lack an innate talent in those fields. Oh boy. Now he’s back! This time as an economic adviser to President Barack Obama (hold your applause), and don’t worry, folks: his ideas are just as rotten. 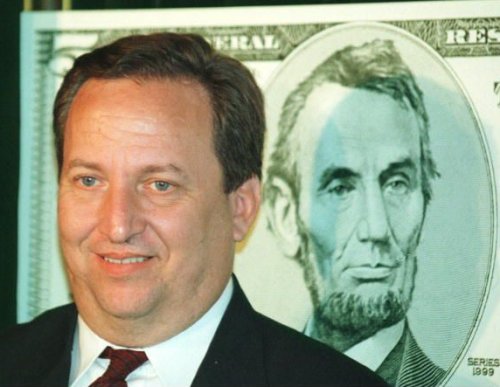 This isn’t Mr. Summers’ first time around the block, economic advisorly speaking. He was also very influential during the Clinton administration (hold your applause) where he helped to pass the Gramm-Leach-Bliley Act.  This act essentially dismantled the Glass-Steagle Act, an important bit of legislation passed during the depression (the 1930s one, not this one) that helped the government more easily regulate financial institutions by building walls between them–for instance, a bank is a bank, an insurance company is an insurance company, and never the two shall meet. Well meet they did, and big time!

When the Gramm-Leach-Bliley Act passed, it made it possible for banks to own other financial institutions. So what did the geniuses on Wall Street do?  They went loophole hunting!  And they found a biggie!  They found out that they are allowed to pick what government agency regulates them.  I’m not going to go too into detail (because you can read an awesome Rolling Stone article about it here!), but basically, some financial dudes (I’m sure there were ladies, too) figured out that the government has a few different agencies that are assigned to regulate different kinds of financial institutions, and some of these agencies are big and badass and really keep an eye out, and other ones are tiny and understaffed and are more likely to overlook things.  Since the Gramm-Leach-Biley Act says one kind of financial institution is allowed to own another kind of financial institution, all you have to do is open a financial institution that gets regulated by the weakest regulator, choose it as the one that gets regulated, and voila!  You’re AIG!  Confusing?  Girl, I just figured out how to pay my credit card bill online, so you’re telling me.  But let’s face it, when has the government (let alone banks?) ever not been confusing?

So how do we fix this?  Before you say I don’t know, say something else!  Do you think that because maybe you don’t have a degree from, say, Harvard, you can’t have an opinion about things?  You’re wrong!  Our friend Larry Summers ran the place, for god’s sake, and look at what he did to our economy.  And now he’s back for seconds!  I think that, aside from being a douchebag in his own right, Mr. Summers represents a larger douchebag culture.  It’s the culture that decides who’s allowed to have a voice, and who isn’t.  Larry Summers was a “genius” economics professor at Harvard by the time he was 28, so he’s allowed to fuck up our economy as much as he wants.  My Nana goes to work every day as a cashier worrying about how she’s going to pay for her prescriptions, and I think that she has some pretty brilliant opinions about the economy but she doesn’t feel like she has a right to voice her opinion because she only has a high school degree.

Not only is this culture of the mind not democratic, it’s not feminist, goldarnit!  We need to get out there and say what we think needs to happen!  Think about people like Mumia Abu Jamal–he’s written beautiful, award-winning essays, not from his Harvard dorm room, but from death row. Think your ideas are stupid?  Have I told you about Larry Summers?  We’re at a very crucial point in history.  Our economy–the economy that gave us the biggest gender pay gap in the post-industrial world, the economy that doesn’t provide childcare or extended maternity leaves, the economy that disappeared our middle- and working-classes, the economy that turned our forests into Wal-Marts and kept those Wal-Marts from unionizing, the economy that has filled our prisons with minorities, the economy that thinks those prisons are worth more taxpayer money than schools–is crumbling.  But if you look at Barack Obama’s (please, hold your applause!) economic advisers, it looks like they’re using the same shitty blueprints to rebuild the same shitty economy.  So do whatever inspires you!  Write a letter to your congressman (or woman), write a soapbox blog post, organize a protest, start a queerleading squad, just don’t keep your mouth closed.

Right on. It's hard to break old bad habits. Sometimes, when we try to change our habits and rescript our behaviors, we find that we are just running the same passion play. Oh, and assholes who discourage women and girls from mathematics and science as such, are sad little men.

Hear, hear, hear, hear, from here. Disappeared our middle and working classes so that the only people who can afford the time to make art, music and literature are the progeny of the wealthy. Has anyone noticed this, or is it just me? Yet douche bags are running around with 300 dollar flip flops and a studio in San Fran's Tenderloin costs $1300. Way to go Larry!!

You think you're mad, and I'm a dude fer cryin out loud! Keep telling the truth!

PS blatant self-promotion can have a positive effect on poverty (believe me, I've seen a fair bit of it
on two sides of the Atlantic).

Thanks for two things on this one: first, keeping the Sommers / official-economist-standard-quo problem out there so people are aware, and then also for putting the problem in plain language. Can't get enough of that, since - as we all know - one of the ways people are regularly silenced is by using jargon or official academic-sounding speak to try to confuse people and obscure the real issues.

clappity clap clap! I can no longer hold my applause.Thanks for an inspiring econ lesson!