Douchebag Decree: Liz "Women in the Military Should Expect to Get Raped" Trotta | Bitch Media

Douchebag Decree: Liz “Women in the Military Should Expect to Get Raped” Trotta

Trigger warning for discussion of rape and sexual assault.

Fox News isn’t exactly known for its nuanced feminist critiques, but when pundit Liz Trotta aired her views on women in the military earlier this week, stating that—among other things—women working in close quarters with men should expect to be raped, things reached a whole new level of douche.

Where to begin? Let’s just follow this trail of douche in the order it appears:

Trotta kicks things off by blaming feminists for “wanting to be warriors and victims at the same time.” So, to be clear, she is saying that women who wish to serve in the infantry also want to be rape victims. Though I don’t know the women to whom she’s referring personally, I feel comfortable saying that they do not want to be raped. No one wants to be raped—that’s what makes it rape. Moving on.

…I think they have actually discovered there is a difference between men and women. And the sexual abuse report says that there has been, since 2006, a 64% increase in violent sexual assaults. Now, what did they expect? These people are in close contact…

For me, one of the douchiest things about this shitshow of an interview is Liz Trotta’s “Men Are From Mars, Women Get Raped” pop-psychology approach to such a serious topic. She appears delighted with herself and her “I think they’ve actually discovered a difference between men and women” comment, even though she said it in reference to the high rates of sexual abuse in the military. A 64% increase in reported violent sexual assaults is not the right lead-in for your “The thing about women is…” material. There’s nothing remotely funny or charming about any of this, a fact that is obvious even to co-anchor Eric Shawn, and he works for Fox News.

And the feminists have also directed them, really, to spend a lot of money. They have sexual counselors all over the place, victims’ advocates, sexual response coordinators… So, you have this whole bureaucracy upon bureaucracy being built up with all kinds of levels of people to support women in the military who are now being raped too much.

There’s victim blaming and then there’s VICTIM BLAMING. Not only is Trotta blaming rape victims for being “raped too much” while they’re at work, she is blaming them for the money being spent on the counseling they need because they were raped. By their coworkers in the US military. It’s hard to even respond to such inane douchebaggery, but an easy place to start is that there is an obvious group to blame for this situation and it’s RAPISTS. The reason the rate of violent sexual assault is up, the reason sexual response coordinators are employed by the military, the reason for the money being spent—it’s because of rapists. Plain and simple.

Because we could probably all use a laugh break at this point, here’s Samantha Bee’s take on things from Tuesday’s episode of The Daily Show:

Just like feminists hate men by assuming they could be something other than prehistoric rape machines!

To throw some icing on your douchecake, Mother Jones’ Adam Weinstein reports that Trotta is also a hypocrite who was for women in combat while shilling for her memoir in 1991. It looks like even Liz Trotta thinks Liz Trotter is full of it!

It would be great if Trotta would acknowledge that she was wrong and apologize (greater still would be if she’d never said anything in the first place). Though it doesn’t look like she’ll be backing down from her unbelievably offensive and backward remarks any time soon, you can sign this Change.org petition encouraging Fox News to fire her. Victim-blaming is never OK, and no one should “expect” to be raped.

I saw this on the Daily Show and it still makes my blood boil. I don't get how people can be so ignorant in 2012, and especially WOMEN! Sam Bee is hilarious, tho. :-)

Can I ask what Samantha Bee said, please? The video is both geo-locked and untranscribed.

Sometimes the Daily Show offers closed captions on videos, but obviously that's unhelpful if it's geolocked. Here's my transcription:

<em>Samantha Bee: Well Jon I know you're expecting an apology and believe me, you'll get it.

<em>S: Jon, for this (gestures at body). All this. You guys can rape it or you can protect it, but you can't ignore it. It's who you are.

<em>J: You know you're about this and sexual assault and things like that like it's a bad habit that men have, like "Oh men always leave their socks on the floor, men can't put the toilet seat down--"

<em>J: So female soldiers should just expect to be sexually assaulted, is what you're saying.

<em>S: Well, female soldiers, gal reporters, lady doctors, teacherettes, aviatrixes--that's just the way it is when you're a woman intruding in a man's world. We expect to be paid slightly less and raped slightly more.

<em>J: As a man I'm offended. Men are absolutely capable of working with women in an appropriate, respectful manner.

<em>S: Oh my god you're right! You know what, you're absolutely right. It's my fault. You don't bring the fruit if you don't want it to get picked.

<em>J: Not every man is in a constant battle to suppress urges to pick fruit that does not want to be picked by them.

<em>S: Oh… so someone hates women.

<em>S: OK, so just like feminists hate men by assuming they could be something other than prehistoric rape machines, which, coincidentally, is the name of my all-girl punk band. We're gonna be at the Roxy this weekend and fellas, as always, ladies drink free if you catch my drift. Two for one roofie-tinis. Come on down! Protect us, rape us, it's your choice. Two choices. Two choices only.

Thanks for saying something!

Relevant: When Our Heroes Fail Us 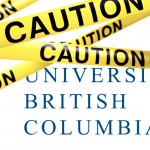 by Anne Thériault
If UBC's handling of Galloway's case shows a lack of transparency, it has at least made one thing very, very clear: Our literary heroes do not always stand up to scrutiny in the times when we need them the most.