OK, so we can all agree that there is a lack of women in positions of power in the tech industry, right? Right. Well, according to Douche du Jour Michael Arrington, it’s our own damn fault. In his piece for TechCrunch (charmingly titled “Too Few Women in Tech? Stop Blaming the Men.”) earlier this week, he had this to say:

I’m going to tell it like it is. And what it is is this: statistically speaking women have a huge advantage as entrepeneurs, because the press is dying to write about them, and venture capitalists are dying to fund them. Just so no one will point the accusing finger of discrimination at them.

Wow. We are so lucky that he decided to “tell it like it is,” because otherwise we never would have known that women have this huge entrepreneurial advantage born out of the guilty consciences of venture capitalists. Huzzah!

Once again, someone with a considerable amount of privilege is getting defensive when he is called on it and is thus attempting to flip the script and blame women for their relative lack of visibility. He is the tech version of your dbag friend who blames homeless people for not working hard enough. Just get a job already, disenfranchised people!

I’m not arguing against Arrington’s claims that his company has made an attempt to hire women as keynote speakers at tech conferences, nor that they’ve had a tough time finding people. What I do take issue with is his conclusion that women are the ones to blame for this. His argument basically erases any systemic problems that might discourage women from entering the tech industry (many of which are outlined in this WSJ article that prompted Arrington’s rant o’ douche) and oversimplifies things until he arrives at his bogus conclusion: women just need to try harder/women aren’t cut out for the tech industry.

Newsflash, Arrington: Your equation (lack of women in the tech industry=lack of women interested in tech jobs) doesn’t add up. It does, however, equal a douchebag decree.

I read this article, as well as the "offending" article and several others that are referenced, and I must say that I completely disagree with this post. Arrington's post was straightforward, honest, and for the most part true. It isn't the industry's fault (which is what this article and many others seem to be saying) that it is male-dominated. There aren't that many women in tech jobs. There just isn't. It isn't for lack of trying-- women are encouraged to become entrepreneurs (even in the so-called douchebag's article)! I call bullshit on the statement that woman are discouraged from these jobs. Show me one instance of a (qualified) woman being rejected from any entrepreneurial job.

On the other hand, according to this article I myself am a douchebag (I believe that homeless people are at least partly to blame for their own condition; there are a plethora of organizations and companies that are willing to help them get back on their feet, they *choose* not to utilize those resources) and perhaps that is why I sympathize with the dbag condemned above. Call me a bitch, but that's my opinion.

In that TechCrunch article Michael Arrington said: "No, the problem is that not enough women want to become entrepreneurs." Yeah, right. And the reason Hillary Clinton isn't President is because she didn't want it enough.

No, i will <b>not</b> call you a bitch. You are correct that according to this article partially blaming homeless people for their own condition makes you a douchebag.

The article is correct.

I have only briefly attempted a startup, but for reasons of economic survival had to re-enter the workforce. So, I've never even attended these conferences, which I think is confusing the issue here, if that's what folks are using as their yardstick these days. But offices?

Examining each workplace I've sat alongside men in IT (or before that, tech production), I've often found condescending, indifferent, or even punitive attitudes towards women who are eager to participate in leadership roles, or step up their game and achieve results which might exceed those of their male counterparts.

(you know, it's not just women who say that in order to survive they have to restrain themselves and not show up the guy next to them)

Yes, there are women in leadership roles: I worked for 2 women, out of 8. How awesome it was, how I loved my job, and how much we got done working together happily! But when I worked in a male-dominated office, it was remarkable, the difference in the climate. I was swimming upstream.

My last manager tried to discourage me in a role where I was managing the IT needs of several medical clinics, by either sabotaging my work after I was at least halfway through OR by scolding me for taking initiative and following through with steps which were totally appropriate for those projects in my charge.

I came home emotionally exhausted, second-guessing myself and wondering why I was working so hard only to be treated as if I was producing poor results. Now, in retrospect, wow, what a douche he was.

Or how about the office where 3 male coworkers prompted an entire week of sexual harassment classes for the entire company because they didn't even bother to go off site but instead laughed it up in their cubicles on their ranking of female coworkers' body parts.

Such offices can often pose hostile work environments, and not all of those offices respond appropriately. As a defense mechanism, many women have measured our steps very carefully lest we lose our jobs: and YES, I have seen firings happen as a result of a woman finally saying "enough" and objecting publicly to these abuses. The instances I witnessed weren't even questioned! In those cases these women reasoned that even if they were treated unfairly they should move on to greener pastures rather than fight to regain their positions. There ain't much green out there for us though.

As I search my memory for which offices encouraged (or at least weren't threatened by) fully tapping the talent and potential of female technical professionals (spanning IT/IS and NOT including tech production workplaces), I can only name 1 workplace of 6 which fit that description. ONE!

Anyway, anecdotes aside, we ARE out there. But it seems easier to assume that our silence equates our non existence or lack of interest (wow). The simple fact is, as I've joked about many times (comic relief heals), that men have a problem with women working on either cars or computers.

Call me on my "bullshit" if you like, the fact is that I know for a fact I have been hit on more than I've been encouraged to shine. That's just my one story though.

I don't have to call BS where there obviously might be a composite character being represented, I merely have to point out that one person's experience does not make the rule. Perhaps the women were fired for being insubordinate and belligerent as opposed to talking with their manager behind a closed door, or going to an HR rep. No matter how legitimate my grievance may be, if I verbally challenge my boss in the middle of a status meeting, or next to the break room, I may be let go for the incident. Not because I stood up for myself, but because of the way that I went about it. I'm an engineer and a woman. I was recruited heavily by multiple programs, found extra scholarships, and numerous societies dedicated to making professional engineers out of talented and interested undergrads. The doors were open, the school didn't choose to only have an average of 5 women to 120 men.

It should be apparent to anyone who had their eyes open to the world around them that women have been suffering the consequences of centuries of discrimination. Perhaps you are unfamiliar with how brutally women were treated when stood up and demanded the right to vote. We couldn't even manage to get the Equal Rights Amendment ratified by the requisite number of States.

Do you think that somehow, magically perhaps, discrimination has ended in all college admissions offices? You seem to have missed the gist of this post. Just because you don't see women represented adequately somewhere does not mean women were not interested or were not qualified. Gender based discrimination is still a huge problem in this country.

I would not draw conclusions based on "obviously might be" with respect to an anecdotal situation, nor do I presume someone is qualified or a feminist because of her gender. There are plenty of faux feminists around. What I <b>am</b> saying is that sticking our heads in the sand with respect to gender discrimination will not help.

We should remember in November.

I never claimed my woman-hood made me a feminist (I am for certain issues, not for others). I was merely illustrating that as a woman, there were many outlets reaching out to me to become an engineer. Classes to develop women in engineering leadership skills, and craptons of scholarships. My point was that this is not some closed gate conspiracy with a few token women in tech, as certain posters have tried to argue.

Actually, Michael Arrington was very nice to me about the whole situation. He is frustrated because he has a female CEO and employs many women. You would be upset if someone called you a manhater when you clearly are not.

I would not declare him a douchebag by any sorts. 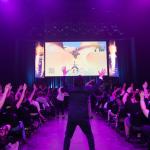 by Felicia L. Montalvo
Learn how much fun branded rebellion can be!