Can a Society Run by Women Still Be a Dystopia? | Bitch Media

Can a Society Run by Women Still Be a Dystopia? Continuing along this guest blog series’ theme of class, caste and slavery, let’s look at a city run by women of color in Alaya Dawn Johnson’s The Summer Prince.

The book’s society, seen through the eyes of young main character June Canto, is a clear critique of class and race dynamics that exist today. As in our real world culture today, the people at the top of The Summer Prince’s society refuse to recognize the oppression that exists their literally pyramid-shaped city.

At first, June thinks of her life as pretty normal. She lives in Palmares Três, the pyramid-like city where the most well-off women (the Queen and her aides, the Aunties) live at the top. At the bottom is “the verde,” where the poorest residents live among algae vats that produce both hydrogen and stench.  June lives in the affluent Tier Eight and can expect to live to be 250 years old. Life isn’t perfect though: she grieves her father’s death, argues with her mother, and competes with annoying classmate Bebel for the prestigious Queen’s Award at school.

Four centuries earlier, the world was ravaged by war and a plague that wiped out 70 percent of all males. Shortly after, Palmares Três was founded; its first Queen began the tradition of the Summer King. In a city run by the Aunties and the Queen, a king is elected. At the end of the year, he is tied to a sacrificial altar and the queen slits his throat. In his dying moments, the Summer King places his bloody hand on the woman who will be the queen for the next year.

Johnson names her imaginary city after a real-life historical community escaped African slaves, indigenous and mixed blood people, poor whites and fugitive Portuguese soldiers set up on the coast of Brazil in the 1600s. Johnson even references this history in the book: As the Queen slits the throat of the Summer King, she announces, “I honor our ancestors who were slaves, and their legacy for which we have named our city.” However, the historical Palmares was not a matriarchy nor is there documentation that ritual sacrifices like the one in The Summer Prince were practiced.

Even with its connection to the historic Palmares and slavery, Palmares Três has appearance regulations. Inhabitants are given gene modifications to ensure that their skin tone is neither too dark nor too light. June notes that her skin is the lightest allowed under these regulations and even her skin is dark enough that one cannot see her veins. The new Summer King, Enki, however, defies those regulations. First of all, he’s from the verde. Secondly, his dark skin flouts appearance regulations. His mother, fleeing from the neighboring gang-ridden Salvador, arrived in Palmares six months pregnant—too late to have all but the most basic gene modifications before giving birth.  The result, June notes, is that Enki is “dark as molasses, but not so dark as tar. Enki was born beautiful.”

Enki continually points out the inequality between the upper tiers and the verde. When he first appears before Queen Oreste (and the entire city) as a candidate for Summer King, he does so dressed like a slave in old Brazil. “You are dressed in the manner of a slave,” points out the shocked Queen Oreste, “in a city where there are none.”

Although it doesn’t endear him to the Queen, Enki’s performance wins him the election. During his first public address as Summer King, Enki again uses the opportunity to highlight the plight of the verde:

“There are about 30 wakas [youth] onstage instead of Enki. They’re dressed in fraying sackcloth and their feet are bare…The wakas are from the verde, the poorest part of the city, and their clothes recall the slavery of our ancestors. Their clothes, their dance, Enki’s presence speaks more eloquently than words: What does this distant Queen know of the verde? The hypocrisy of Palmares Tres dances on that stage, and though it shocks me, I can’t help but want to join them.”

In addition to race and class dynamics, other issues from our real-world culture persist in Palmares Três. Even in a city run by women, teen motherhood continues to be stigmatized. One character in the book is the son of a woman who had him when she was 16. Although eighteen years have passed, both the son and mother, who has become a talented and sought-after designer, still face prejudice from those around them. In fact, in a city where people live to age 250, anyone under age 30 are treated with condescension, if not disdain. Enki’s popularity among both young and old people threatens the smooth and unchallenged reign of the Aunties and the Queen. And, with Enki as Summer King, June (and the rest of the city) start to realize that deceit bubbles beneath the beauty of Palmares Três.

So poverty and inequality are not eliminated under matriarchal rule. But Johnson’s matriarchy changes some of the ways people regard sexuality. People love and lust after for whomever they want, regardless of gender. June’s mother was first married to a man. Less than a year after his death, she marries a woman. No one bats an eye except June, who is furious at her mother’s rapid remarriage. At his first public appearance as Summer King, Enki and June’s best friend Gil meet and are immediately smitten. Their romance becomes constant fodder for the gossip feeds, but again no one questions their pairing.

The Summer Prince doesn’t push readers to think about real-world injustices like Tankborn, Partials or Truancy do. Instead, it was only when I emerged from Johnson’s beautifully written pages that I began to reflect on some of the similarities (and differences) between her world and this one. I can see YA readers, particularly YA girl readers, enjoying The Summer Prince, but it might take some prodding to connect the world and underlying injustices of Palmares Três to real-world issues of race, class, stigma and power.

Read the rest of this guest blog series about girls of color in dystopian YA!

Sounds fascinating. I need to get my hands on a copy to read. What an interesting idea and I love the research put into this.

I'm so glad people are talking about this book. I recently, along with the Rainbow Book List Committee, helped to nominate this title as one that could end up on our next list: http://glbtrt.ala.org/rainbowbooks/archives/1038
LGBTQ lit for teens is *so* white-washed. While more and more LGBTQ titles are available, the diversity we see in them is still lacking. We're more often than not reading about white, middle-class gay men (who are more "straight-acting" than "femme"). I was delighted to see a matriarchy where gay marriage was so commonplace and unremarkable that the words "gay" or "bisexual" aren't even used in the book.
I also thought the author's writing was very reminiscent of Francesca Lia Block: so dreamy and lush and fertile.
I highly recommend this read. Thanks for sharing!

Yoshinaga Fumi's Ooku (manga) is a great example of a feminist work set in a dystopia. The Red-Face Pox wipes out 3/4 of the male population of Japan, and eventually women take over the Shogunate, the merchant families, and all the leadership positions in the country. This leads to some really fascinating new ideas about gender and shows how fluid gender norms can be, but also shows how limiting binary ideas of gender are. The two movies that came out in Japan are also great; the drama was good but not as good as the films or the manga. 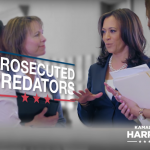 by Veronica Arreola
While the Senate is very white, two women of color are in a runoff for California's Senate seat.