Tube Tied: Eastwick Has Got Some Seriously Empowerful Witches, Y'all | Bitch Media

Tube Tied: Eastwick Has Got Some Seriously Empowerful Witches, Y'all 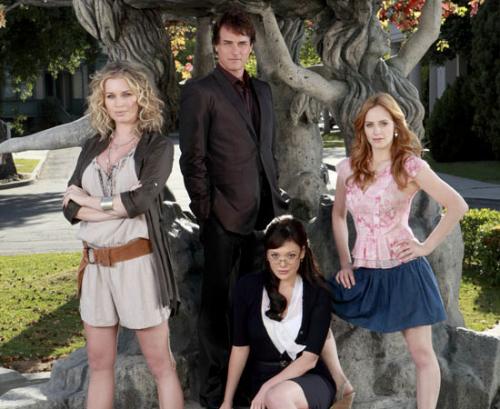 I'll admit that I only really tuned into Eastwick out of a sense of national duty - Paul Gross, like me, is Canadian, and I feel he is owed some serious cash for his talents, wasted though they might be on American network television.  (Canadian television has no such riches on offer.)  Gross was always a tall drink of water of an actor (he may be known to you as a Mountie), and yet he has what I would call a genuine edge, with a wonderful sense of humor, and there's something about him that for me just feels like home.  So whatever he's in, I watch, and so, I watched Eastwick.

To give you an idea of what kind of objections the mere presence of Paul Gross can overcome for me, Eastwick is a loose adaptation of a movie that was a loose adaptation of a John Updike novel.  And Updike, regardless of the adulation he sparks in male undergraduate English majors everywhere, hated women.  There's really no way to say that gently.  He just did.  To wit, Eastwick (like the novel itself) is about three outcast women who are brought together by - who else - a dark, mysterious man who understands these women better than they do themselves.  The women are, ostensibly, witches, in the sense that they have various powers available to them.  These powers are nonetheless heavily rooted in what Updike understands as the bewitching nature of female sexuality - their ability to control men, to make men do as they want.  In fact, in the novel, Gross' character, Darryl Van Horne, is the women's own conjuring of the perfect man - and which, apparently, they envision in more or less pure sexual terms.

In ABC's hands, Updike's horrifically inaccurate vision of the internal lives of women becomes even less apt than usual.  Rebecca Romjin (who will always have a special place in my heart for playing a transwoman on Ugly Betty without the vaguest whiff of condescension) is apparently the "artsy" one, which is dramatized, in the ancient fashion, by wearing a hell of a lot of chunky jewelry and working in what looks to be a New Age store.  Jaime Ray Newman is the "mom" with the crap deadbeat husband who is afraid to stand up for herself and is, naturally, a nurse with a hot little outfit.  Lindsay Price is the shy "nerd" with glasses and a bun, both of which of course disappear once she's liberated because it would, overall, be impossible that any woman's true self could be expressed without her tits shoved into a push-up bra and a great deal of eyeliner.

The actors are a vaguely appealing bunch nonetheless, but the writing is bad.  Very bad.  There's a lot of "how can I ever thank you"s and rescues from attempted rapes to tell you just how good Van Horne is and hot poolboy-like-persons with undefined purposes other than looking hot in a bunch of rumpled sheets.  The women discuss things among themselves like how large Van Horne's schlong is - apparently the dude is HUUUUUGE!  (Which I have to say, other than conversations about discomfort I have never heard a real life woman initiate a conversation in which all nodded in agreement to any kind of pronouncement about desirable penis size.  But maybe I am an anomaly.  TV certainly seems to think so.)  And ladies, at some point in the pilot episode, they all dance in a fountain.  Yep, this show has all the subtle interpretations of female desire of a wet t-shirt contest.

In a sense it is reminiscent of every candy-coloured "You go, girl!" show that has appeared on network television since about the time Murphy Brown disappeared off the air.  Desperate Housewives, Sex and the City, its varied spinoffs: they're all the same.  They're all about some quasi-mainstream-pornulated formulation of female empowerment that has very little to do with what women are, actually, like.  They are about how men see us: clothes-obsessed, writhing in soaked cocktail dresses and utterly uninterested in anything but men.  Gross, you guys.  Just gross.  And not the right kind.

Given the deep misogyny of the former and the depressing vapidness of the latter, I'm actually surprised that it wasn't worse.

Where can I buy the clunky jewelry worn by Rebecca Romjin on Eastwick?

that Rebecca Romijn is wearing on Eastwick I have searched for days
the show's not bad ........i love the hottie playing Jack's old role what a body nice and tall OUCH yeah babyyy

I don't know about Rebecca Romijn's jewelry, but I can definitely make most of the jewelry the other girls were wearing. I paid attention during the show and noticed lots of nice stuff!

You know what you should watch instead for some awesome Paul Gross? SLINGS & ARROWS! It did not offend my delicate feminist sensibilities ;) , is magnificently produced & written & acted from beginning to end, and features a subtle but beautiful gay love story as the main 3-season undercurrent. Mwah.

I am the proud owner of all three seasons, Nina. I know me my Gross.

It does? Are you talking about Oliver and Geoffrey, or did I completely miss/forget an entire plot point? If so, clearly my once a year rewatch isn't enough.

Sadly, I will probably continue to watch Eastwick, because Paul Gross is so very fun to watch, even in such a crappy show. I'll only watch his scenes, though, I promise!

I too MUST have the necklaces worn by Rebecca in episode 1. Please anybody? Help?