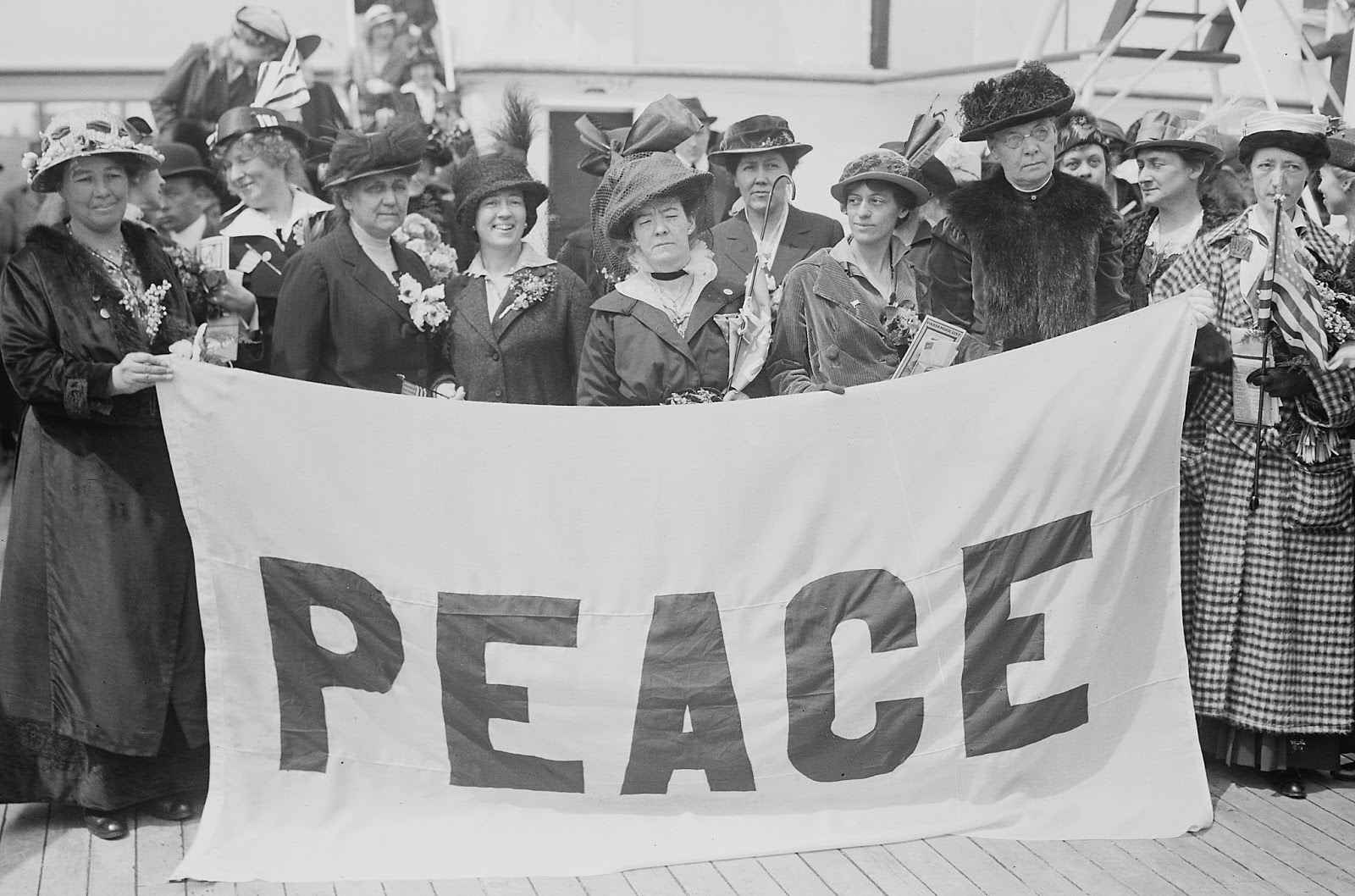 This story was originally published on May 9, 2014.

The founder of Mother’s Day was a righteous, anti-capitalist bitch. This year, let’s skip the toxic flowers and honor peace. Now, I have nothing against a little shopping. We can’t all be DIY mavens. If my kids want a new pair of platform booties or if the maternal figures in my life desire hand-dipped chocolate, there’s going to be some barter or buying involved. But check it out: Each year now, Americans collectively spend nearly $20 billion on Mother’s Day.

It would be one thing if all that money bought some respect for the work all moms do—but so far, no luck. The spending spree, according to the National Retail Federation, is second only to Christmas and includes more than $2 billion spent on flowers, $1.5 billion on pampering gifts like spa treatments, and another $680 million on greeting cards. If you’ve seen some of the sickly sweet cards out there, I can probably interest you in a stylish designer barf bag made just for expectant moms. For a holiday founded by anti-commercialization peace mamas, the current capitalist machine is beyond gag-worthy.

Celebrations of motherhood have been observed in lots of cultures and subcultures, but the U.S. version that’s gone global came out of women’s peace groups. The idea was to honor moms who’d lost their sons to combat. Early activities included organized reconciliation meetings between mothers whose sons had fought or died on opposite sides of the Civil War. Think of that. Instead of toxic pedicures and Hallmark cards, these women exchanged tears and understanding for other mother’s grief. Decades before Woodrow Wilson’s Mother’s Day Proclamation, women got together in “Mother’s Day Work Clubs” not to brunch, but to address typhoid outbreaks by cleaning up both Union and Confederate encampments. In 1872, social justice activist Julia Ward Howe called for an celebration of “Mother’s Day for Peace” that would be an anti-violence protest.

Anna Jarvis is known as the modern mother of Mother’s Day for her activism getting the official holiday on the books, envisioned “a day of sentiment, not profit.” As you can imagine, it wasn’t long before she regretted her troubles. For one thing, she hated greetings cards. “And candy!” she protested, according to the book Women Who Made a Difference by Carole Crowe-Carraco. “You take a box to Mother—and then eat most of it yourself. A pretty sentiment.” It wasn’t just candy companies that raised Jarvis’s hackles. In one press release criticizing the floral industry, Jarvis referred to those who profited from Mother’s Day as “charlatans, bandits, pirates, racketeers, kidnappers and termites that would undermine with their greed one of the finest, noblest and truest movements and celebrations.”

Beginning less than a decade after she’d won her fight to establish Mother’s Day, she took the other side. Jarvis, who didn’t have kids of her own, ended up spending all of her inheritance and the rest of her life fighting the abuse of the holiday. She organized boycotts and threatened lawsuits to try and curb the commercialization of it all. She crashed a candy-makers convention in Philadelphia in 1923 and then a gathering of the American War Mothers in 1925. This time she was arrested for disturbing the peace. Anna Jarvis died the way too many righteous activists do—penniless in a sanitarium. This Mother’s Day, in honor of Anna Jarvis and other activists, make peace or disturb it as needed.

Here are eight ideas to get you started.

The vast majority of images of mom you’ll see this Mother’s Day will picture the idealized American version: White, straight, married, mid-30s. But whites are a global minority—and we’d all like to see a little less of them. Queer parents of all genders cold use some positive words and imaging. Single and other unmarried moms need some brunch, too. Teen parents deserve to be idealized. Create and share images of and odes to the underrepresented mamas who’ve helped make your life better.

2. Get a Cooler Card

Not every greeting card creator is profiteering charlatan, of course. If you want to send mom or dad card and you don’t want to craft it yourself, pick a mama-made card like one from Katherine Arnoldi’s “Thanks, Mom” series. The proceeds go to help kids and families attending this year’s Allied Media Conference.

3. Turn Your Pain into Action

If you’re going to be spending Mother’s Day thinking about a mom you’ve lost or never known, take a cue from Jarvis. Her own mother, Ann, was actually the one to start working for a “Mother’s Friendship Day” in America. Daughter Anna only took up the fight after Ann died. So the founder of Mother’s Day was motherless, too. And many of those early peace activists had lost their sons to war. They didn’t have their children. They organized to help make their communities better. What’s an organization, individual, or nonprofit you can help support today?

4. Get active! Raise awareness about an issue that affects moms and kids

For example, you can honor the day by raising a ruckus for #BringBackOurGirls, the social media campaign focusing on the lack of media coverage on the kidnapping of 200 teen girls in Nigeria. Imagine busting your ass so your daughter can get an education, then getting news that she’s been kidnapped from her school. Adding insult to horror, your government officials shrug and tell you to keep quiet about the whole ordeal. Whether you’re the mother of one of the missing girls or not, don’t keep quiet. Call for international action to bring home the more-than 200 Nigerian students abducted from their dorm rooms last month or another issue that you think is important.

5. Reclaim Fatherhood While You’re At It

How come the phrase “to mother a child” conjures ideas of nurturance while the phrase “to father a child” refers only to the act of knocking up your gal pal? Give props to the men in your life who want to nurture relationships and be held accountable. For anti-patriarchal community-building inspirations, pick up a copy of Rad Dad magazine.

Even if you’re not in the middle of a typhoid outbreak in your community, you know your mama-friends could use a little clean-up help. Go and do a mom’s dishes, make dinner for a stressed out friend with kids, or offer to babysit so she can take a break.

Like with the greeting cards, if you are going to buy flowers for your mom, get her ones that will actually make the world sweeter. If you want to pick up some flowers for the mom in your life, hit your local farmer’s market or fair-trade florist. Pesticide exposure contributes to high rates of miscarriage among pregnant flower industry workers and birth defects among their children. Moms, child laborers, and others reportedly work as much as 20 hours a day during the weeks before Valentine’s Day and Mother’s Day. All so we can show our love. As Anna Jarvis would say, “A pretty sentiment.”

Don’t have anyone—mother or otherwise—you want to engage with this Mother’s Day? I don’t blame you. I’m fed up with most people. Don’t worry, we can still be a part of Mother’s Day. I recommend picking up a little bit of Anna Jarvis’s suave fashion sense. I’ll be rocking this hat.

Got the hat and I'm going to wear it!

Be good to see more "Mother's Day Work Clubs" around! See also on this topic, http://themongers.blogspot.com/2014/05/one-hundred-mothers-days.html

Very informative and constructive article. I will be reading more!

If you are like me, and have lost your mother in recent years, Mother's Day does not have to the be most depressing day on the planet for you. Instead of sitting around moping, or just trying to hide from the day while your friends, relatives, and peers are spending the day with their mothers, take up one of these wonderful social-conscious/justice suggestions such as honoring marginalized mothers, cleaning a mother's house, or wearing a cool, butch hat while thinking about your mom that is no longer around.

"But whites are a global minority—and we’d all like to see a little less of them." That sounds pretty racist, and maybe I'm misunderstanding, but is the author saying that "we'd" like to see less of them on tv or Earth? A little clarification, please? Thank you!

When I was growing up, my siblings and I would visit my father every other weekend at his Oakland apartment. My...