One of the things that’s really frustrating to me as a woman in electronic music is the malecentric critical discourse. To hear some critics tell it, women have been largely bystanders and groupies. Bill Brewster and Frank Broughton’s Last Night A DJ Saved My Life: The History of the Disc Jockey has a mere two pages dedicated to female DJs (out of 400), while other classics in the field like Simon Reynolds’ Generation Ecstasy are little better. So as I did the preparation for this series of posts, it was a pleasant surprise to see that someone had finally stepped into this gaping hole and published a book on the subject: Tara Rodgers, women’s studies professor, musician and webmistress of the pinknoises website.

In her book Pink Noises, Rodgers draws together 24 interviews with a broad cross-section of female DJs, producers, composers, installation artists and more to talk about gender, race, sexuality, sexism and music. Some of the women she talks to include members of Le Tigre, Blevin Blectum, and Pauline Oliveros, inventor of the Deep Listening technique. Many of these interviews are illuminating and thought-provoking on both the technical and social aspects of electronic music. There’s a wide range of opinions by the artists offered about what it means to be a woman in electronic scenes, with a distinct tension between feminist and humanist ideas expressed by the artists. Gender appears as both determinative and distinctive, and irrelevant and restrictive, at various times. Indeed, these are sometimes in the same answer for the same person, as when the the “prose producer” Antye Greie (AGF) says “it plays pretty much a big role” and then later “I grew up as a human first” (such is the paradox of living in an individualistic social world, I think). The feminist-fluent Le Tigre give, unsurprisingly, one of the most articulate interviews about the place of gender and sexuality in the book.

Rodgers herself is a fairly unobtrusive presence—content to let the artists do most of the talking—though she contributes a nice introduction which sets the scene historically and indicates some of the motivating ideas in the field. She suggests that the rhetoric of futurism is itself historically a masculine one, and that there may be alternative feminist ways of looking at electronic music, such as through Oliveros’s Deep Listening. Sadly there’s not also a conclusion, which might have been nice in summing up the import of the information delivered by the artists and looking forward to the future, where the gendered implications of the ready availability of digital tools for music are yet to be truly clear.

However, that’s just a minor quibble in what is a vitally needed book, and it really is wonderful to read so many women talking passionately about the subject.

<P>I haven't read Brewster and Broughton's new book, <EM>The Record Players: DJ Revolutionaries</EM>, yet. However, my partner is currently reading it for his site (I've got Ellen Willis for <A href="http://feministmusicgeek.com/" target=_blank>my site</A>, then we swap) and said that they specifically say in the introduction that they wanted to include more women but that<EM> there just weren't any</EM>. SIDE EYE RAGE FACE NO NOT AGAIN YOU TWO. My first thought upon this news was "these dudes need to read <EM>Pink Noises</EM>." My second thought was, "they need to follow along with Electro Feminisms too." I'm really enjoying this series, Emily. Keep it up--you're contributing something vital.</P>

I am a fan of what Brewster and Broughton are doing, but what they do is centered on the history of deejaying. The fact is that in the history of deejaying, there have been basically zero CRITICAL female deejays. I think it's valid to question why that is, and to explore these reasons fully. But that isn't going to change what already happened. As much as I support people doing research into female deejays and electronic music producers and highlighting them, it would be flawed to give them a place in the pantheon of revered deejays if they haven't earned it. And while I don't doubt that there are some nefarious people out there in electronic music, this is a culture that has traditionally embraced black, latino, gay, transexual, and many other marginalized minorities' contributions to the music. I do not believe that a woman performing a critical role would be looked down upon in any way. Even the names mentioned in Pink Noises or here are not truly pivotal in their roles. Ellen Alien might be the closest but I would hardly call her an innovator in any way. There's a bunch of good female deejays and producers out there, they're just not the people doing the best work. Would it be better if these women were artificially elevated to a higher status?

Relevant: Moonrise Nation’s New Album Will Keep You Up At Night 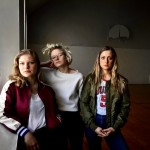 by Evette Dionne
“Glamour Child” is a force to be reckoned with.