The Best Part of “Empire” is the Unstoppable Cookie Lyon 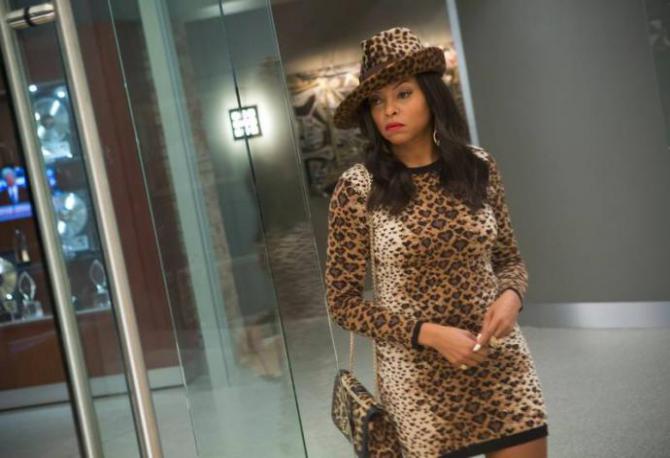 Taraji Henson stars as Cookie, a woman determined to get back on top of the world.

While we absorb the news of the distressingly white Oscar nominations, it’s worth taking a minute to recognize that the small screen is currently an amazing spot for women of color. For African Americans in particular, Shonda Rhimes changed the game with two back-to-back shows, Scandal and How To Get Away With Murder, that feature complex starring roles for Black women. This month, Fox’s Empire has arrived, with its drama centering on an African American family that owns a successful record label.

So far, the show has gotten mixed reviews. New Yorker critic Emily Nussbaum describes the show as “urban King Lear” that draws her in despite its poorly written dialogue. Danielle C. Belton of The Root sums up Empire as a hip-hop soap opera that’s an “imperfect, hot mess of a show” but still fun to watch. Empire revolves around music mogul Lucious Lyon (Terrence Howard), who learns he has ALS and is likely to die within the next three years. He wants to pick his successor from among his three sons. Things get more complicated when Lucious’ ex-wife, Cookie Lyon (Taraji P. Henson) gets released from prison—she’s a fabulous woman scorned who wants a piece of the company she helped found with drug money.

Critics agree that Henson’s character makes the show. According to Kweli I. Wright in Ebony, “Her one-liners make everything all right in the world. Seriously.”  In the New Yorker, Nussbaum writes that Henson “charges up the show with a wild, infectious brio, turning hackneyed lines into platinum zingers.” Henson is even lovable in real life. Among other great quotes in a New York Post interview, Henson says, “If a feminist means speaking up for the rights of females—then dammit, I’m a feminist. 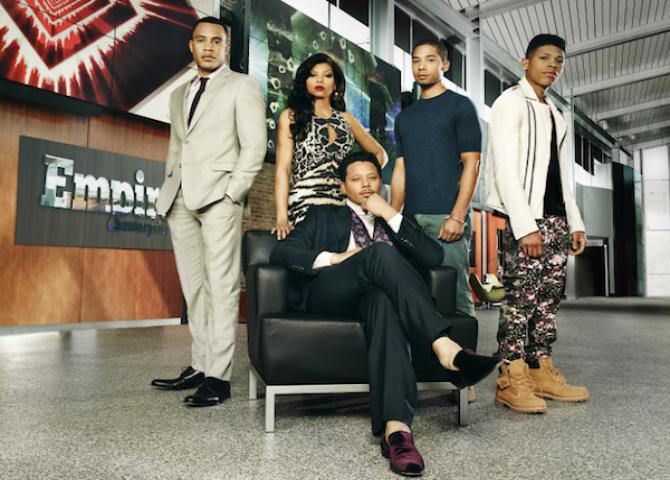 One of the things I love about Henson’s performance as Cookie is that she looks like just cougarish eye candy—on another show, she would likely play the non-speaking role of wife to some OG gangster. But Cookie herself is the gangster. Not only was the money she made dealing drugs the initial investment that made the Empire possible, she was also the artistic force behind Lucious’ success as a rapper. She had the ear, the guts, and the brains to make it all happen. She is also the one who made the sacrifice: she got caught and served 17 years in prison while Lucious got to enjoy his fame. If Lucious weren’t dying of ALS, the women in the audience might not be able to forgive him for divorcing Cookie and dating a younger woman while she did time for him. In this, we also appreciate Cookie as a cautionary tale: black women can decide to ride or die for a man, but we rarely get reciprocal loyalty. Yet Cookie has risen from her position as jilted first wife, jailed criminal, and hidden founder of the company. Although Lucious’ picture is out front, this show begins with her comeback.

While they start out at odds, I imagine that in future episodes, Cookie and Luscious will reconcile. The new girlfriend is hard to sympathize with. In Scandal, the President’s wife Mellie, gives us much more complication and pathos. The girlfriend in Empire is blandly attractive, bourgei, and catty, but not much more.

As other critics have pointed out, the plot is overly melodramatic and cliché, but we could forgive that. The drama is fun, even when it’s ridiculous or predictable. My biggest problem with the show is that the music is surprisingly weak. Like Nashville and Smash, the show involves numerous original songs that are integral to character development (and, in a financial boon to the TV studio, available for purchase on iTunes). Empire’s songs start out promising: the opening scene with singer/actress Veroinika Bozeman singing “What Is Love?” is deeply moving, but this particular song is not part of the core plot. The central musical battle evolving over the first two episodes has the potential to be interesting: Lucious has pitted his two artist sons against each other to take over the record dynasty. Cookie aims to make their gay singer/songwriter son Jamal (Jussie Smollett) into a star, while a homophobic Lucious makes every attempt to sabotage him. Lucious’ favorite is spoiled youngest son and bad boy rapper Hakeem (Bryshere Gray), who is busy sabotaging himself with drunken viral videos and hungover rehearsals. 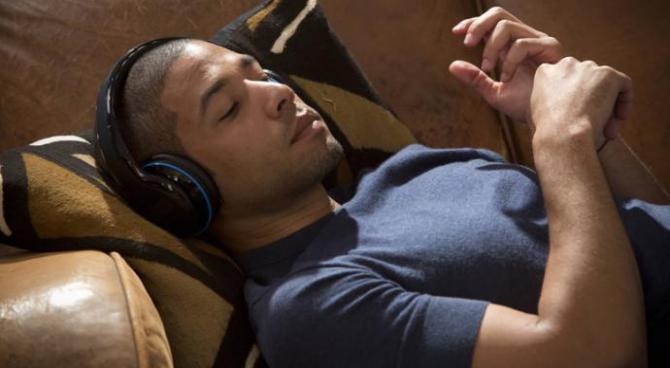 Jamal is played by Jussie Smollett.

In fact, Hakeem goes so far as to call President Obama—a personal friend of Lucious’—a sellout. He is asked to apologize on stage, but instead he does it his own way by writing a song called “No Apologies” with Jamal. The performance scene reminds me of Nashville. In one of Nashville’s storylines, country music bad girl Juliette Barnes has a quote about God that gets taken out of context and incites the fury of Christian fundamentalists, who begin to boycott her concerts, burn her records, and vilify her. At the same time, she is inducted into the Grand Old Opry, and is encouraged to apologize during her acceptance speech. Instead, she sings her new hit “Don’t Put Dirt on My Grave Just Yet.” Unlike Hakeem, the song is righteously defiant. She’s been ruthlessly targeted by a bullying group of right-wingers for something she neither said nor believed. Further, she’s painstakingly built her career over a period of years, after growing up in a trailer park with a mother addicted to drugs.

In contrast, Hakeem is a rich kid who’s been handed the mic by his rap mogul father who’s being asked to apologize for a drunken video in which he urinated on the floor in a restaurant and called the first Black president a sellout. He has built nothing, earned nothing, paid dues for nothing. In this context, his “No Apologies” comes off like a sociopathic frat boy party anthem. In contrast to the stunning voice of Veronika Bozeman in the opening scene, Hakeem’s character has nothing of substance. The lyrics are weak, the song lacks any narrative arc, the beat and hook are utterly forgettable. Hakeem, played by hip hop artist Bryshere Gray, has a lovely face with an adorable pair of dimples, but lacks any bad boy rapper charisma. With his high top fade and brightly colored clothes, he reminds me of a young, goofy Will Smith from the Fresh Prince 1980s. In contrast, I think of Kaldrick King, the rapper character from the TV show The LA Complex. That actor felt like a gangsta rap artist to me—he had it, he had charisma. Hakeem’s character doesn’t.

With the show Nashville, I didn’t expect to love the music, because I’m not a country music fan. However, I found myself humming “Don’t Put Dirt on My Grave Just Yet,” and searched in vain on iTunes for the show’s cover of “Ho Hey.” In contrast, I have no emotional response to any of the main songs in Empire. This is particularly problematic because Jamal’s music is supposed to be the gut-wrenching cry of the young gay man bullied by his father. But the technological manipulation of the vocals is so complete that it lacks the human voice vulnerability that the drama demands. The music utterly failed to move me. And I’m not that hard to move. I wept inconsolably at the ending of Finding Nemo. I found myself sobbing recently while watching an old episode of Friday Night Lights on Netflix. Not only does Empire’s music fail to stir my emotion, it also doesn’t match the indie singer/songwriter backstory on the character. He is billed as John Legend, but he sounds like a Backstreet Boy.

The even larger problem is that the weakness of both sons’ performances undermines the credibility of their parents’ characters. When Cookie and Lucious each dote over their favorite, heaping praise on their performances, they look utterly absurd. I’m surprised other critics aren’t leading with the weakness of the music (written and produced by Lee Daniels and Timbaland). Perhaps I’m hopelessly out of touch with the utter mediocrity of hip hop and don’t know that this is what passes for good music these days. Much of my hip hop taste harks back to the late-1980s golden era, where the music was harmless and danceable or idealistic and political. Or both.

In a show like this, music is more than ambience, it determines the stakes of the story. Scandal is a DC political show. So the political content needs to be compelling, and it is. Similarly, How To Get Away With Murder, a lawyer show, is compelling, from a legal standpoint. In contrast, however, the musical content of Empire is not at all compelling. It undermines the entire show.

And yet, particularly as a writer of urban fiction, I am thrilled to see Empire on television. A show that puts a larger-than-life woman of color in the center is ultimately a breakthrough for the genre. If Cookie, a post-prison drug dealer and brilliant music producer can be a TV protagonist who steals every scene from her ex-husband, then anything is possible. Why not Black Artemis’ novel where a duo of female emcees are seduced and pitted against each other by a ruthless producer in the music industry for a label that turns out to have deadly secrets? Why not Noire’s novel about a young ex-stripper turned con artist who finds out she’s a dead ringer for the age progressed photo of a missing oil heiress in Texas? The notion that TV can tell the stories of women of color without class privilege, without white husbands or lovers, without college degrees is a good sign for all of us. Because it is our stories of trying to make it, despite racism and economic odds stacked against us, as women, that have rarely occupied the center of the big or small screen. The centering of these stories not only reflects a move toward race, class, and gender justice, but it makes for irresistible watching.

Related Reading: As An Urban Feminist, I Was Surprised to Fall in Love With Nashville.

Aya de Leon teaches creative writing at UC Berkeley. She blogs and tweets about culture, gender, and race at @AyadeLeon and ayadeleon.wordpress.com.

Anika Calhoun is Lucious' girlfriend, not his wife.

Thanks for pointing that out. We made this correction in the article.

I love this article. It's thoughtful and I agree what you say in context to Nashville. But the music is spellbinding. Just because perhaps hip hop isn't your beat, doesn't mean it's not "moving." I know this is your opinion and I will keep reading, but those songs are hits. Just sayin'. And the actors are amazing. The two younger boys are playing it perfect.

totally AGREE with you. I love the music. Empire is a bright spot in my day ...and the music is a big reason for this (among others). Normally I feel like a slob when I watch TV, but Empire engages the mind and the senses.