Laura Jane Grace of Against Me! came out as transgender last week and set off a media firestorm.  While you anxiously await the next Against Me! album, here's a genderpocalyptic playlist of songs by trans and gender-nonconforming artists for gender-bending jammin' on every occasion.

“In the End” by Justin Vivian Bond

“Got Monsters” by Mina Caputo

“Revolution” by All the Pretty Horses

“I Ain't Taking No Shit” by Big Freedia

“She Walks Away” by Lipstick Conspiracy

For more information about the lives of transgender and gender-nonconforming muscians, check out the transfabulous rockumentary Riot Acts: Flaunting Gender Deviance in Musical Performance.

Actually, not quite shameless, but what the hell...

Genderfucked version of a classic by a trans artist. That would be me. 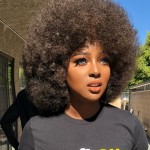 by Dahlia Balcazar
Latinx women are still making inroads in the music industry.