Everything You Need to Know About Abercrombie's Hijab Case | Bitch Media

Everything You Need to Know About Abercrombie's Hijab Case

A protest outside the Supreme Court calls attention to Abercrombie’s discrimination case. Photo via CAIR.

If you’ve been keeping up with Abercrombie’s terrible PR moves—links here, here and here—you know that it has repeatedly come under fire for being intolerant of anyone who does not fit the ideal Abercrombie image; what they call “classic East Coast collegiate style,” and what I more accurately refer to as “vanilla beach Barbie-Ken-esque style.”

Most notably, in 2013, a 2006 interview with former CEO Mike Jeffries resurfaced, where he made disparaging comments about not wanting “fat” or “not-so-cool kids” wearing Abercrombie’s clothes, bringing a lot of bad press to Abercrombie. Now, Abercrombie & Fitch’s intolerant and discriminatory hiring practices have caught the Supreme Court’s attention. This week, the court heard arguments on whether the allegation that Abercrombie & Fitch illegally rejected a Muslim job applicant, Samantha Elauf, for wearing hijab has constitutional merit. The Court’s decision is expected in June.

The Equal Employment Opportunity Commission (EEOC) brought suit, on behalf of Samantha Elauf, under Title VII of the 1964 Civil Rights Act. Under Title VII, employers cannot refuse employment on the basis of a potential employee’s religious beliefs unless accommodating those beliefs would bring the employer “undue hardship.” Title VII’s religious accommodation protection is especially important when an applicant or employee’s faith is readily identifiable.

A decision in the EEOC’s favor will have significant effects on employers’ hiring practices, placing the burden on employers to make potential employees aware of any policies which may affect them. Abercrombie argues that its store policy, known as its “Look Policy,” forbids sales staff, whom it considers models, from wearing any sort of cap (untrue, given that Abercrombie and its other retail affiliates do sell caps, hats, and scarves of many styles and patterns all year round) and that floor staff are expected to represent the store’s “classic East Coast collegiate style.” Abercrombie argues that forcing it to allow sales associates to wear non-conforming pieces would be an “undue hardship” because it will change the brand’s perception. Boo hoo. Apparently the perception is that “classic East Coast collegiate style” does not include people who outwardly express their differing faith.

Abercrombie is a Repeat Offender

Elauf’s case isn’t the first time Abercrombie has hidden behind its Look Policy. Cases in point:

Abercrombie & Fitch has come under fire for its draconian Look Policy. The company’s style guide lays out exactly what kind of attire store employees can wear and how they can wear it. They regulate everything from the length of jeans’ cuffs to fingernail length, 5 o’clock shadows, hair highlights and traces of eyeliner. Failure to meet these very specific guidelines result in violations, where an employee can be reprimanded, sent home and even fired.

This decision was appealed to the 10th Circuit in 2013, which reversed the District Court’s decision, ruling in favor of Abercrombie. The 10th Circuit found that the hiring agent for Abercrombie did not have notice that Elauf wore her hijab based on her religious beliefs and therefore Abercrombie did not have a duty to accommodate her religion when her hijab conflicted with its store policy regarding employee attire. The assistant store manager saw Elauf wearing hijab but did not know her religion and the assistant store manager just assumed Elauf was Muslim but never asked, and Elauf never explicitly said she was a Muslim. The 10th Circuit places the burden on employees and applicants to ensure that the workplace will be a suitable work environment for them, in light of their required religious practices.

How SCOTUS Should Rule

In the EEOC’s favor (obviously). Here’s why:

The 10th Circuit improperly decided the issue of Notice. There isn’t really a difference between actual knowledge (Elauf expressly asking for an accommodation based on her religion) and constructive knowledge (Elauf showing up to a job interview wearing religious garb). Abercrombie’s assistant store manager assumed Elauf was Muslim and figured that was the religious reason why she wore her hijab. Despite this, the 10th Circuit held that,

“It is not enough that an employer is aware of a potential conflict; the applicant must present the employer with explicit details sufficient to give it ‘particularized, actual knowledge’ before an employer need consider accommodating the applicant’s religious practices, even if it is the employer that possesses more knowledge about how its rules may conflict with the religious practices.”

The American-Arab Anti-Discrimination Committee (“ADC”), in their Brief of Amici Curiae, put it best:

To establish that Ms. Elauf was in need of an accommodation, it was enough that the interviewer believed Ms. Elauf wore the hijab for religious reasons. Thus, the 10th Circuit set a terrible precedent.

Additionally, as the Tenth Circuit noted, accommodations under the Americans with Disabilities Act (ADA) are often looked to for guidance in religious accommodation cases. But despite acknowledging the analogy that is often drawn between these two situations, the Court failed to extend that same logic when it came to the Notice requirement. In ADA cases, federal courts have determined that there is no requirement that an employer have actual knowledge in order to engage in the interactive process (The ADC cites Barnett v. U.S. Air, Inc., Coley v. Grant County, Jacques v. DiMarzio).

SCOTUS should find that an employer is required to engage in an interactive process when recognizing that an employee or applicant might need a religious accommodation. Abercrombie only has to inquire about whether the applicant or employee wears the hijab (or other religious garb/symbolism) for a religious reason. This inquiry responsibility on employers is necessary so that they do not shirk their obligations under Title VII.

Look, Abercrombie has every right to keep its image through its fascist methods of micro-control. It can push the “classic East Coast collegiate” look all it wants. But there is no reason that it cannot include people of all identities while doing so. I mean, I went to college on the East Coast. I can promise that almost no one fits the Abercrombie model anyway. More importantly, preventing people of differing religious identities from seeking employment is a discriminatory practice, and one that Abercrombie must seriously reconsider.

Naji’a Tameez is about to graduate Law School and is perpetually looking for ways to channel her social justice frustrations. This article is republished with permission from MuslimGirl, an online magazine and non-profit aimed at empowering the voices and cultivating the leadership of Muslim women in the United States and abroad. 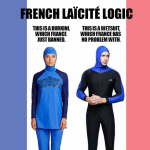 by Naaz Modan
Women should be able to wear what they want to the beach.