I held a party a couple weeks ago at my place, and invited two old friends, who had dated for a couple of years in the '90s. They parted on good terms and stayed in the same social circles, happily platonic. Or so I thought...until I stepped outside to get more ice from the corner bodega and found them in full moonlit snog on the front steps of my building. When I talked with her a couple days later I casually dropped her ex's name into the conversation and--sensing the question before I asked it--she said, "Oh, it's nothing. When we don't have girlfriends, we just recycle the sex every now and then."

For her it was what we jokingly call part of our "anti-celibacy campaign." And why not? She and her ex like each other, know each other's bodies well, and know exactly why things didn't work out the first time, so they're not under any illusions about getting back together. More power to them, I say.

I never bought into the notion that having sex with an ex was somehow automatically dangerous to one's mental health, or a sign that you'd given in and settled for something you'd already discarded--although both ideas get major play from ladymags, movies, television and my older relatives (hi aunties!). Those things might be true...but they just as likely might not be. They're usually predicated on the retro, anti-feminist assumption that us girlies don't ever have sex except in a relationship, or because we are trying to lure someone into a relationship. And, of course, it's assumed that we are so emotionally fragile that a night (or day or quick nooner) with an ex post-breakup is going to totally destroy our delicate feminine equilibrium.

I have absolutely call bullshit on that school of thought, although personally, I've only successfully recycled the sex once. My college boyfriend, who I had dated for two years--including long-distance most of the first year I lived in NYC--wound up crashing at my place while he was in town job-hunting. Although it had been five years since our breakup, we fell into the same easy-going routine that we'd established so many years earlier, including sex. The morning he was supposed to fly home, I kissed him goodbye and left for work. I arrived at my office just as the second plane slammed into the south tower of the World Trade Center. Hours later, I returned home, sweaty, coughing and emotionally drained to find him on my doorstep. His 10 AM flight from LaGuardia had been cancelled, of course. He stayed with me for another three days, phoning relatives to say he was okay, and going to the grocery store for ice cream. He probably would have liked some "terror sex"--apparently everyone New York was fucking like bunnies that week--but for once my libido was dead as a doornail, so we settled for cuddling. And I confess--I felt a little guilty. It's not as though the recycled sex wasn't on my mind: it was. As I walked home across the Queensboro Bridge with thousands of panicky fellow New Yorkers--military jets screaming overhead and dust and smoke from downtown washing over us--I remember thinking that if terrorists struck again and the last sex I had in this life was slightly tepid, vanilla lovin' with my ex from college, I would be very disappointed.

That was the last ex sex of my life. I've had two very serious relationships since then. The first, my Older Lover--who I almost married and who was responsible for the breakup from hell--came back almost a year later and wanted to try again. He told me he still missed me and still loved me, kissed me, and held me close...my mind definitely turned to sex. Romantic, nostalgic reunion sex? A revenge fuck--knock his socks off and then dump him the next morning? In the heat of the moment, both occurred to me. But something else happened. In some isolated corner of my logical left brain, I noticed that the things that used to turn me on--his lips, his thick hair, the smell of his skin--were, oddly, not doing it for me now. In fact, they were making me a little sick to my stomach.

In that moment I was reminded of the time in college when I ate a pulled pork sandwich--one of my favorite foods in the world--that was tainted. Tasted good at the time, but there was something bad wrong with it. I threw up for six hours straight. It was years before I could eat another pulled pork sandwich. I knew objectively that pulled pork was delicious, and normally just the smell of a barbecue pit was enough to send me into a salivating frenzy. But the association of pulled pork with a violent multi-hour puke-a-thon was enough to override the part of me that longed for the sandwich.

The hideous breakup with my Older Lover had been like the multi-hour puke-a-thon; I now associated him, his smell and his taste, with misery and suffering. Fucking him was simply out of the question. Sometimes we discover that our bodies have innate self-defense mechanisms that work just beautifully. I'm glad that one kicked in when it did, because getting back together with the Older Lover--even just for a night--would have been a huge mistake.

That was emblematic of my usual pattern with exes. If you've broken my heart, you will not be seeing my ladybits again. My self-protective aversion to emotional damage overrides any physical attraction. If we had a respectful parting and remained friends...well, if the opportunity for some frisky fun presents itself, I'll decide on a case by case basis. If the sex was fantastic the first time around, it's much more likely that his petition will be looked upon favorably. But most of the time, I'd rather just find someone new, because while familiarity is nice, the thrill of novelty is much more my speed.

I've had ex sex on more than one occasion, with more than one ex (though not at the same time). And like you, it was the nature and manner of the break-up that predicted my ability to 'recycle' in that way. I absolutely love the way you put it:
"The hideous breakup with my Older Lover had been like the multi-hour puke-a-thon; I now associated him, his smell and his taste, with misery and suffering."

A bad breakup IS a lot like bad pork.

I've also gone the ex sex route several times. But interestingly, for me, it's been the exact opposite - the exes I've slept with *were* the ones who badly broke my heart. The first time around, with the 6-year partner I nearly married, the ex sex turned out to be a bad idea - it inevitably resulted in us getting back together, which was a *very* bad idea. But more recently, with my ex-husband (the breakup with whom was sudden, dramatic, and heartwrenching - and also involved the loss of a stepdaughter and in-law family I loved), the ex sex (both pre- and post-divorce, even) was actually both good and cathartic. We both knew we could never get back together, and neither of us was seeing anyone else, and, well, it had always been good...so why not? I didn't and don't regret it at all.

While I've had many relationships, these two men were the only two I was truly, madly, deeply in love with. With the others, by the time I left, I didn't want to go back, so even when ex sex was offered I wasn't interested. But with these two...the chemistry was still there, even if we made bad relationship partners.

According to my own experience, sex with your ex is a very bad idea. Even taking into account all the advantages of the situation you most likely will be frustrated, empty or at least confused. A friend of mine compares it to finishing a sandwich that you've made few days ago, ate just a half of it and left it for someone else. He says that it's better get a new and fresh one....Who knows, maybe he's right. 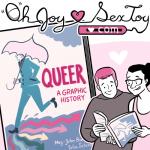 by Erika Moen
A new book illustrates queer theory and the intricacies of LGBTQ identity.