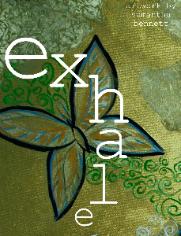 I became pregnant, the first time, in October 1997. Starting in my earliest days of trying to conceive, I kept a stack of pregnancy-related books on my nightstand, and I read through them religiously several times a day, every day. Given all that, I'm sure I must have skimmed over the sobering statistic--an estimated 1/3 of pregnancies end in miscarriage--at least once during my pregnancy. But I don't recall it. Who had time for sober? I was heady with all things baby. When I eventually joined that sad 1/3 sorority nine weeks into my pregnancy, I really could have used a resource like Exhale magazine.

Exhale defines itself as:

"...a unique new literary magazine written for & by ordinary people who have faced extraordinary obstacles to getting/staying knocked up, or who have experienced miscarriage, stillbirth, or infant death...

Exhale is a space for creative expression. We seek out the gritty humor and complexities of discovering that producing a child isn't as easy as your mother told you. Without succumbing to the belief that a person's self-worth and happiness are defined by reproductive achievement, we recognize and validate the vast array of perspectives and emotions associated with pregnancy/infant loss and infertility issues."

These losses aren't often discussed publicly; I had no idea how many women among three generations of my friends and family had had miscarriages until I began to talk about mine. Most of these women had never before discussed their losses with anyone but their spouses or partners, or perhaps their own mothers.

Exhale addresses the difficulty inherent in bereavement of such losses and the social impact of them in our mommy-and-baby-centric culture. This monthly online magazine offers women a "unique space of their own for creative exploration of such questions as...what it means to be a mom, and how one celebrates motherhood when one has lost a pregnancy or infant." Each issue features sometimes humorous personal essays, poetry, art, and book-and-blog reviews written by a core group of Exhale columnists and by other contributors.

Seattle-area writer and college English instructor Monica LeMoine launched Exhale in 2008."Exhale highlights the less-than-obvious aspects of discovering that having kids isn't always easy," says LeMoine. "There are a lot of complex emotions that go along with losing a baby, being unable to get pregnant naturally, or finding oneself past that optimal 'biological window' when sustainable pregnancy is even plausible."

After miscarrying at four months gestation and subsequently losing her son to stillbirth, LeMoine founded Exhale to fill a "glaring need for witty, intelligently written reading material on the touchy subject of losing a baby. I wanted something that delved deeper into the psychological and emotional complexities of pregnancy loss than just 'losing a baby sucks.'" She soon saw the need to expand Exhale to include women and men who struggled with infertility or were otherwise childless-not-by-choice.

The magazine is also a resource for women who desire to mother but whose partners either refuse to have children, or more children, and for those who live with chronic health conditions that make motherhood, whether biological or adoptive, impossible.

Erin Newman-Long, the cover artist for the current issue of Exhale, writes this introduction to the photo gallery she has entitled, "Family Portrait":

"Family Portrait" is an exploration of the invisibility and denial of grief in American society. Why do we hide from grief, from our own pain and sorrow, and the pain and sorrow of others? Why do we as a culture encourage this behavior in each other? What are we ashamed of? I ask these questions specifically when the death we hide from is that of a newborn, that most unacceptable and also unacknowledged of deaths.

Not until a recent tragic and horrific loss in my own life, the death of my first-born child Birdie who was stillborn on March 3, 2007, have I ever questioned the way that we as a society "handle" death in this country. Birdie's death, and the intense grief and anger that has been with me every day since, has raised so many questions about public grieving for me...

Following Birdie's death, while still in the hospital with her, my husband Matt and I photographed her and each other with her. Even though we were deep in shock, we intuited that to photograph was right and important, as the days we would have with her would be our only moments with her...

Exhale columnist Cindy "Murgdan" chronicles her infertility "month-by-month". In one essay in the series, "The Third Month", she writes:

Welcome to month three! By now you have braved the ravages of the initial diagnosis and conquered the first two months of infertility. Only four more weeks until the second cry-mester begins!

The second cry-mester is a time of true relaxation, because the danger of accidental pregnancy is pretty much passed. If you've made it this far, you are unlikely to spontaneously impregnate without some intervention, so there's one less thing to be anxious about during this process.

Thanks... I needed to know this was out there...