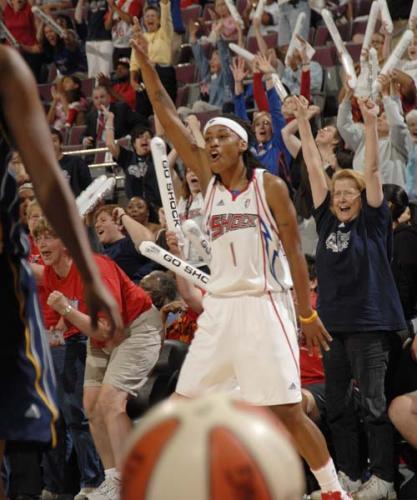 You want to know why I'm a lucky gal? It's because I'm a bigtime sports fan and I live in Detroit, home to four pro teams in four different leagues, to say nothing of Big Ten sports at Michigan and Michigan State. In the last six years, my city saw the Detroit Shock win three championships, and the Red Wings and the Pistons take a title apiece (and this year, the Red Wings made it to Game 7 of the Finals). We saw the Tigers win the AL pennant and play in the World Series three years after having one of the worst seasons in the history of the MLB. And just this last spring, the Final Four was played in Detroit, with Michigan State making it to the final court.

It's a great city to be a sports fan not only because of how well-rounded its teams are, but because of how meaningful they are. Championship runs bring this city together in celebration of its possibilities, hugging each on the streets. In a nation that regularly finds news ways to loathe Detroit (worst this, most miserable that), our sports celebrations bear more weight than most. Fans here value work ethic and loyalty more than most cities (no, Boston, I'm not looking you ... really...); there is heart here.

So what's with all this prelude? Because I'm so down about hearing the rumors that the Detroit Shock may be moving to Tulsa. Oklahoma, which lured the Sonics from Seattle just a couple years ago, seems anxious to host a WNBA team and I can't fault them that ... god knows, a lot of heart and jaw-dropping skill is laid out on the court by WNBA athletes who play for passion (certainly not paychecks).

But I've been damn proud of the Shock as a Detroit team and I don't want them to go. I am in love with players like Katie Smith, Deanna Nolan, and Plenette Pierson, who play with guts and skill.

What's more, Detroit's vibrant sports culture needs pro women's teams. Frankly, most people just aren't accustomed to seeing women athletes at the top of their game--and even less accustomed to seeing fans of women athletes. This was made abundantly clear during the WNBA Finals a couple weeks ago between the Phoenix Mercury and the Indiana Fever (a ridiculously exciting series, by the way). The #wnba Twitter feed was full of cheering fans ... and full of haters who seemed to be shocked, just shocked, that people cared about women playing sports.

Consider these examples from the night the Mercury were crowned WNBA champs (and the night I fell in love with Cappie Pondexter):

@mafiawarsjnote: The WNBA Finals were on? How did miss that? *sarcastic grin*
@ForeverPhresh: look the Mercury jus won the EuroLe...oops i mean the WNBA title. Am i the only 1 whose sayin who cares rite now?
@seemaki: So WNBA is a hot trending topic on twitter? Are people just being generous today?
@ashton1881: in todays who gives a shit news RT @BreakingNews: The Phoenix Mercury wins the WNBA title, beat Indiana 94086 for a 3-2 series victory.

It is as if these folks think that if they're not WNBA fans, then no one is or ever will be. The presumption is enormous. I, for example, have never been able to get very enthusiastic about golf or tennis. But to imply those games are therefore worthless, and their practitioners have no talent, BECAUSE I am not a fan? It's too much.

And it is surely no surprise to feminists that the haters aren't only on Twitter. ESPN, "the worldwide leader in sports," couldn't bear nary a mention of the WNBA Championship game. @erockett89 put it best: "Wow seriously @espn2 you are talking about pie throwing INSTEAD OF THE WNBA CHAMPIONSHIP THAT JUST HAPPENED?! Fuck you."

The dismissiveness even during the league's most climatic moment is seen again today with the news that the Detroit Shock--perhaps the league's first dynasty, the native team of legendary baller Cheryl Ford--may be moving to Tulsa.

Rather than write their own story about the news, ESPN and Sports Illustrated just reprinted the AP report on their websites. In fact, almost every single WNBA story on ESPN's website is a wire story ... in contrast to the direct reporting they do even on sports like college lacrosse and (wait for it) poker.

That's right, ESPN is putting its direct coverage behind a card game rather than pro women's basketball. And the real rub? When the WNBA (and its fans and communities) are forced to defend its very existence all the time, we never get to a place for actual conversations--conversations that include a nuanced look at where the league needs to improve. 'Cause it ain't perfect. 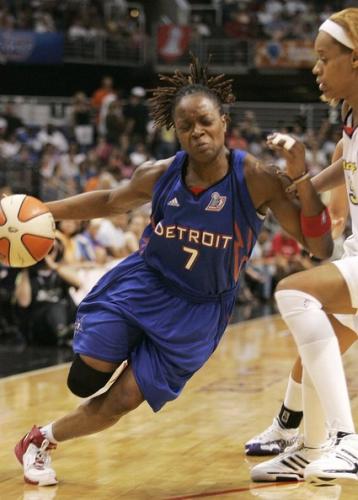 But hand it to the local reporters: Patrick Hayes of mlive.com wrote a thoughtful (and original!) piece about Detroit's pending move and why it matters:

"The cynical approach that most male sports writers take is that women's basketball is less entertaining than men's. Sure, the games are different, but some of those same sports writers are the first to criticize the flash/individualism of NBA basketball while pining for the days of fundamental, team ball. Well, that's exactly what the WNBA is, and no team exhibited physical, hard-nosed team-basketball better than the Shock."

Oh, and another thing? Lisa Leslie retired this year. Lisa. Leslie. Sure, she has some old-fashioned notions about gender norms. All the same, Leslie is an indisputable legend. She first came to national recognition when she scored 101 points in ONE (1) half of a basketball game at Morningside High School in California. She was the first woman to dunk and the first player to score 5,000 points in pro ball. She played twelve years in the league -- and gave birth to her daughter mid-career. Now 37, Leslie boasts four Olympic gold medals, two WNBA championships, three league MVPs, and records as the league's leading scorer (6,263 pts) and rebounder (3,307). Michael Cooper, former Laker and now LA Sparks coach, broke down in tears after Leslie's last game when asked what it was like to coach her. Because she is a huge deal.

ESPN covered Leslie's retirement with one column (that, to be fair, was pretty good). Sports Illustrated? With another AP wire story.

I guess their sports reporting staff is too busy to write original copy, given all the poker playing going on around the country.

It's all bullshit. And if I let myself go, I'll find myself in a fury at the dismal non-coverage of the WNBA and at the ridiculous Twitter haters who seem to be under the sorry assumption that they themselves could take on the likes of Diana Taurasi on the court. Um, no.

As a fan of many sports, I've found that if people simply pay a bit of attention, it's hard not to enjoy a great game. Sports is all about the stories. Fans follow favorite players and teams--for them, the protagonists--through the injuries and the triumphs, the close-calls and the glory. It seems to me that the WNBA is no different.

If people simply pay a bit of attention, it's hard for joy and awe to not follow. And this is why I'm down about Detroit leaving for Tulsa. In such a rare and exciting sports city, I want a share of the attention going to the Shock. I want fans here, in one of the greatest sports cities in the world, to bear witness to the WNBA game. "Expect Great" is the astute slogan for the WNBA--but for many people who don't yet "expect great" from women athletes, they will need to see before they believe. The fact is, it takes time for a league to build its fan base; men's pro sports have had generations to fuel the passion that's now behind them. The WNBA is only a little more than a decade old.

I want more time. I want more games. I want a pro women's team in Detroit and in Tulsa.

And I want more people to know that many of us care.

"In fact, almost every single WNBA story on ESPN's website is a wire story ... in contrast to the direct reporting they do even on sports like college lacrosse and (wait for it) poker. That's right, ESPN is putting its direct coverage behind a card game rather than pro women's basketball."

Amen. This continues to infuriate me.

ESPN is a for-profit business, however. If the interest in the WNBA is so low that it would be a better business decision for ESPN to rely on wire coverage, and instead send its reporters and columnists to things like poker, why should it be held against them? But for the financial sponsorship of the NBA, the WNBA would have collapsed as a business years and years ago. Why should ESPN singularly be held to a standard--a disregard of profitability--beyond that of which the rest private sector is help to?

ESPN's mission statement is "To serve sports fans wherever sports are watched, listened to, discussed, debated, read about or played."

So when their coverage falls short of this, I feel perfectly fine holding it against them. This isn't holding them to different standards from the rest of the private sector (or any other journalism organization); it's holding them to their OWN standards.

your post has hit the nail on the head for me. you said everything i was thinking. Thank you. I will still continue my support if Deanna Nolan and the Shock from afar. 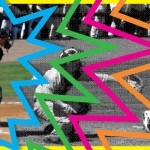