VAG HALEN tears it up in Toronto.

If crack-smoking mayor Rob Ford is all you know about Toronto, then you have a lot to learn. While the Canadian city has become internationally infamous for the disturbing antics of its unfortunate mayor, Toronto has cultivated one of the most exciting and diverse queer feminist art scene in recent years. From last Halloween’s Lesbian Feminist Haunted House to numerous experimental queer bands,  Toronto has a community that supports media makers who push the political and artistic envelope.

“Artists are the lifeblood of this city and the constant inspiration for me as an individual and an artist,” says Toronto musician Vanessa Dunn, who goes by the stage name Vee Stun when performing with her band VAG HALEN.

A performance art group comprised of queer women, VAG HALEN performs covers of the notoriously misogynistic hair rock music of the ‘80s and ‘90s. The band is made up of Vanessa Dunn (who goes by stage name Vee Stun), Susan Gale, Aimee Bessada, Steph Markowitz, Heather Kirby, Jackie Mohr, and Katie Ritchie. While VAG HALEN performs covers—often better than the original band, in my humble opinion—from laughably misogynistic bands like Guns ‘n Roses and Van Halen in over-the-top, rollicking performances that riff on classic rock iconography. Their website sums up their mission with typical sass: “Armed with a repertoire of classics, VAG muff dives into the salty cock rock waters, blowing nether regions with their commitment to all things QUEER and all things ROCK.” “I have a real affinity for the canon of rock and the songs we cover,” says Dunn. “But the songs and the industry and image that historically has surrounded this genre is incredibly problematic for women and trans*, people of color, and the queer community.” Remaking these songs into ballads song by queer folk, VAG HALEN, forces the issue of who these songs were made for and why they’re so popular—all the while shredding through a fierce rock-and-roll performance. Their work points out that the current landscape of indie rock music performed by and for white dudes is oftentimes equally as misogynistic as rock’s glam forefathers.

Complicated perspectives on power and performance also echo throughout the work of Toronto experimental band YAMANTAKA // SONIC TITAN, who were just nominated for a Juno Award (the Canadian Grammy’s) earlier this month. Formed by performers Ruby Kato Attwood and Alaska B in Montreal, the band has made Toronto one of their artistic homes. YAMANTAKA // SONIC TITAN apparently have a drum set made of crystals.

YAMANTAKA // SONIC TITAN was originally formed as a university project intended to explore the Attwood and Alaska B’s Asian-Canadian heritage. The collective currently includes six members (including Ange Loft, John Acheta, Brendan Swanson and Walter Scott) and is composed of artists of pan-Asian and Indigenous heritage who are queer and trans*.

YAMANTAKA // SONIC TITAN’s music reflects Attwood and Alaska B’s original intent: to disrupt and subvert the cultural signifiers of Asian Canadian identity. Deftly mixing art-punk with Japanese and Chinese Operatic styles and classical musical forms with futuristic reference points, their sound is intentionally laden with disruptive dualities. The collective has described themselves as “a mutating and constantly evolving art cult.” They don’t limit themselves to music, either. In addition to releasing records they have performed drag operas and large scale installation and theater projects.

In the fall of 2013, the collective released their latest album, UZU, to critical acclaim. Continuing in the tradition of breaking down musical genres, the album features Japanese, Chinese, and rock opera elements with epic classical compositions infused with futuristic metal. Beyond their exploration of pan-Asian identities using their “noh-wave” genre, this album speaks to the Indigenous perspectives of collective members. The single “One” begins with a traditional Iroquois chant performed by artists from the Mohawk tribe—an ode to the complicated histories of Indigenous Canadians. The song then continues into an eclectic mash-up of sounds that is representative of the artful music and intentional cultural compositions the band has become known for.

One major driving force behind the creation of Toronto’s supportive queer-punk music scene was community organizer Will Munro. Before his death in 2010, Munro helped to queer Toronto’s punk scene from the inside out. Originally from Mississauga, Munro was a major part in the punk scene when he attended art school in Toronto. He volunteered at a local LGBTIQ youth organization and musically he supported queer musical placemaking in Toronto by curating giant queer music parties.  The most well-known of these was Vazaleen (respelled because Vaseline expressed legal concern), a regular event that for six years supported the assemblage of queers and misfits from across the city. Vazaleen was unique for a queer party because it played rock and punk music and was outside of the  “gay neighborhood” on the east end of Toronto. In 2003, Munro co-founded The Beaver, a restaurant and bar on Queen Street West in an intentional attempt to create a physical space that welcomed the queer communities.

Will Munro (with headphones) and DJ Khris Steeves at a craft-making music night. (photo by Spins & Needles)

“As an artist, I owe a lot to Will Munro,” says VAG HALEN’s Vanessa Dunn. “While there are lots of queer artists and DJs who were breaking ground in the west end of Toronto, it was Will who really tore it up and fucked with it. Will’s art and parties were rooted in punk rock. His parties embodied the camp and fierce politics of queerness.”

Emphasizing the importance of women in Toronto’s musical placemaking Vanessa went on, “Will was always surrounded by the fiercest fucking women and I can imagine that had a great impact on his person.”

One performer who got his start at The Beaver is Canadian indie rock musician Reg Vermue. While Vermue has been in several bands, including the well-known Hidden Cameras, his drag alter-ego Regina the Gentlelady is just getting her start. Vermue first performed in drag at The Beaver and has gone on to comprise half of the duo Light Fires.

“I didn’t fully come into my sexuality until I moved to Toronto and joined the Hidden Cameras. And by that time I was already 25,” says Vermue. “So the Cameras and Will’s party Vazaleen were a whole new world for me. That’s where I saw Peaches and the Gossip and all these amazing bands first.” Light Fires’ debut album, Face, explores queer identity between catchy hooks and danceable beats. Regina the Gentlelady unabashedly muses about sex, butter as lube, and the politics of power in relationships. One of the most powerful sentiments from the album is when Regina belts out,”If you’re bored make it up, it you’re bored just make it up”—an apt description of what many queer artists around the world inevitably do.

“I kind of think of Regina as me blossoming. Regina is this whole force of nature. She’s a character and a persona and can ultimately be anything or do anything I want. There are no limits,” says Vermue.

Toronto is just one of many cities, from Poznań, Poland to Omaha, Nebraska, where queer and feminist artists are making their own scenes. But it is undeniable that Toronto’s specific history of queer and feminist art-making have informed many Torontonian artist’s sound and artistic evolutions.

In describing the VAG HALEN experience, Vanessa Dunn’s words resonate with much of the art being made throughout the city, “To really understand what we do and why we do it, you need to experience it as part of a crowd. The solidarity, the feminism, the queerness, the politics, the rock n roll, and the sweaty, filthy sexuality makes for quite the experience.”

Lizzy Shramko is a Minneapolis based writer who dances to Mazarati and dreams in queer theory. She is the Outreach Coordinator at Paper Darts Magazine and contributor at l’etoile magazine.

All band photos courtesy of the performers. 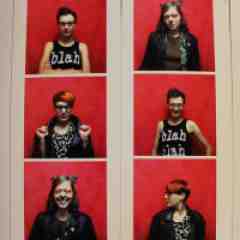 I just wanted to drop some links on some long-standing QTPOC music institutions in Toronto:

Blockorama Blackness YES! at pride is the largest block party at pride:

"Blackness Yes! is a community-based committee that works year-round to celebrate Black queer and Trans history, creativity and resistance. Our mandate is to create a space for LGBTIQQ folks of African decent and their friends, loved ones and supporters. We work to affirm, celebrate and ensure visible Black LGBTTIQQ communities within Pride; to create a Black cultural space within Pride that any Black or Black affirming person can be a part of; and to create a vehicle for HIV/AIDS information dissemination. We create spaces of resistance and celebration at Toronto’s Pride festival and at other community-based events year-round in Toronto.

We are committed to anti-oppression, (self) love freedom and justice. We are a space of resistance and actively fight systemic racism, transphobia, homophobia, ableism, classism and colonialism. We are anti- imperialism and are against the occupation of Palestine and Turtle Island."