Things that are pissing me off today: Lynndie England is blaming the media for printing the photos taken at Abu Ghraib of Iraqi prisoners being tortured. According to an AP piece, she acknowledges that after the photos of the atrocities were exposed, the Iraqi insurgency picked up. Here's her quote:


"Yeah, I took the photos but I didn't make it worldwide. Yes, I was in five or six pictures and I took some pictures, and those pictures were shameful and degrading to the Iraqis and to our government," she said, according to the report. "And I feel sorry and wrong about what I did. But it would not have escalated to what it did all over the world if it wouldn't have been for someone leaking it to the media."

Notice that she says the photos were shameful and degrading to Iraqis, not the torture, not her own decisions and actions. In addition, I'm a little peeved by Horton Hears a Who. Not the anti-abortion protests surrounding Horton's admonition that "a person's person no matter how small," although that sticks in my craw as well. No, I'm more upset by the characterization of the bad guy, who in this case is that old archetype of a joyless, spirit-crushing, overprotective mother, who, to protect "the children," tries to extinguish any spark of freedom she sees. That this castrating kangaroo is voiced by trailblazing female comic Carol Burnett just adds insult to injury. 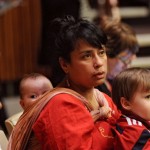