The US and Canadian national soccer teams face off in 2011. Photo by Brent Flanders.

Back in April, US national soccer team forward Sydney Leroux posted a picture of her torn-up, bloody legs on Twitter with the words, “This is why soccer should be played on grass!” Leroux was referring to the fact that she had just finished a game played on artificial turf. Her statement was part of a brewing controversy in women’s soccer: next year’s World Cup championship in Canada will be played on artificial turf instead of grass, the latter being the surface professional players prefer. Future men’s World Cup games, by the way, will be played on grass. That disparity prompted a group of the world’s best soccer players to file a lawsuit along with the Ontario Human Rights Tribunal against FIFA (Fédération Internationale de Football Association, the world governing body of professional soccer) and the Canadian Soccer Association (CSA). The charge? That forcing women to play on artificial turf is gender discrimination.

According to the AP, US players Abby Wambach and Alex Morgan, Germany’s Nadine Angerer, Brazil’s Fabiana Da Silva Simoes, and Spain’s Veronica Boquete are among the players bringing the suit. The players have been bringing attention to the turf issue for years—ever since Canada’s proposal to play on artificial turf was accepted—and they sent a letter to FIFA and the CSA in July, saying they were “prepared to take the legal action.” Canada was the only country that submitted a bid to host the 2015 Women’s World Cup and in recent days, the National Organizing Committee CEO for the 2015 Women’s World Cup Peter Montopoli told reporters that the only option for the games had only ever been artificial turf. Referencing the U-20 Men’s World Cup from seven years ago, Montopoli said that making women play on artificial turf was not discriminatory, “We’ve done this before and we’re very confident in what we proposed to FIFA.” 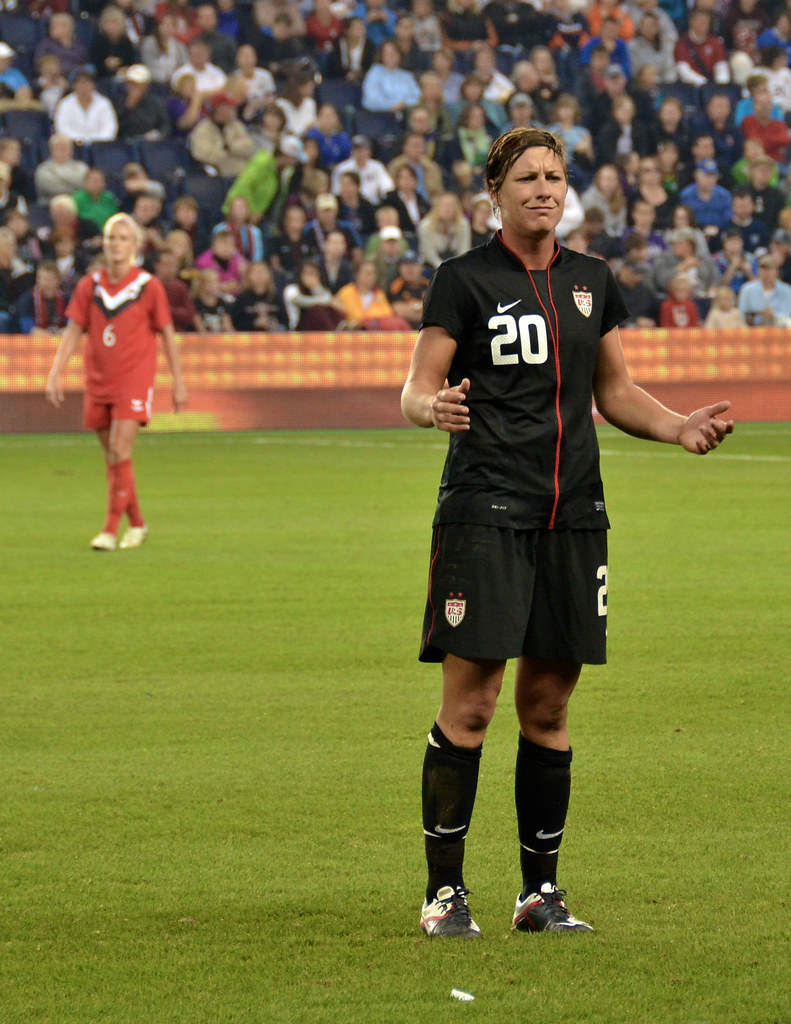 Abby Wambach, looking very displeased during a 2011 match against the Canadians. Photo by Brent Flanders.

The players’ lawsuit says that playing the game on artificial turf means “that next summer’s World Cup—the preeminent event in women’s soccer—[will] take place on literally unequal playing fields.” The plaintiffs compare this upcoming Cup to “all prior men’s and women’s World Cups” and the upcoming men’s World Cups in 2018 and 2022, all of which have been and will be played on grass. The lawsuit also specifically draws attention to the fact that when Canadian men’s team played its qualifiers for this year’s men World Cup, the team only played on grass. As the CSA’s General Secretary said at the time, “It has to be grass… our [men’s] coaching staff and players prefer grass.” Perhaps it’s worth noting that the men’s team did not qualify for the World Cup while the Canadian women’s team has a real chance of winning the entire thing next year.

The women suing FIFA and the CSA have three main reasons that this discrimination harms the women who will play in the Cup. It forces them to “compete on a surface that fundamentally alters the way the game is played,” leaves them vulnerable “to unique and serious risks of injury,” and devalues “their dignity, state of mind, and self-respect as a result of requiring them to play on a second-class surface before tens of thousands of stadium spectators and a global broadcast audience.” Bam.

From both the lawsuit and Leroux’s April tweet about the damage to her legs following a match on turf, it’s clear players believe the material puts them at greater risk for injury, though there have been studies that dispute this claim (one from last year even said women have fewer injuries when they play on turf).

Beyond the problem of injury though, players dislike turf because they feel like it changes how they play the game. While synthetic material might make the most sense to get more kids onto green pitches and even to teach fundamentals, it changes how the ball moves and, according to players, affects how they play. Leroux said, “The ball slides on turf. The bounce is different. Everything is different.” US midfielder Megan Rapinoe compared running on turf to “playing on padded concrete.” Turf, unlike grass, does not tear, and so players are more cautious about what they will attempt on the pitch. Wambach told the New York Times that she won’t consider a flying header (a move displayed by the Netherland’s Robin van Persie in the World Cup earlier this year) because she fears the landing on turf. Leroux noted that the turf’s lack of give means “you can’t slide tackle someone, you can’t do all the great things that come with playing soccer, on turf, you just can’t.” Deadspin pointed out in a recent post on the women’s lawsuit that Gareth Bale, a winger for Wales and Real Madrid, in reaction to playing on turf last month, said, “I can’t describe how bad, bobbly and hard the pitch was to deal with.” 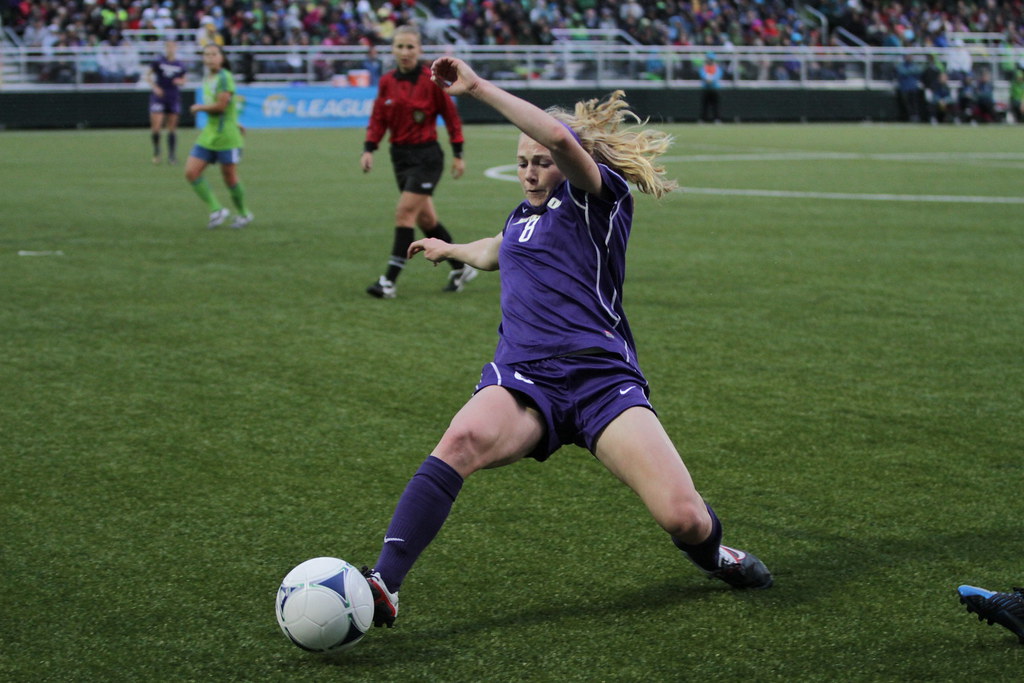 The Seattle Sounders and the University of Washington soccer team competing on artificial turf. Photo by Evil Dan.

How the game is played matters because viewers want to see the best soccer when they’re watching the World Cup. And there will be viewers. Women’s soccer is TV ratings bonanza during the World Cup and the Olympics. Back in 1999, the famous World Cup final that saw the US win in the Rose Bowl drew almost 18 million viewers. That is slightly more than the number of Americans who watched the men’s World Cup final this summer when it aired on ABC. The women’s World Cup final in 2011 between the US and Japan (which Japan won) was, at that time, the most-watched and highest-rated soccer telecast on ESPN, bringing in over 13 million viewers. The following year, in 2012, when the US played Japan in the gold medal match (the US winning this one), the NBC Sports Network, then a fledgling channel trying to build its viewer base, scored an average of 4.35 million viewers and 1.46 million video streams.

This dispute about women playing on turf versus men playing on grass is part of a longer history of discrimination within the sport. Sepp Blatter, the president of FIFA, is famous for the sexist things he says. Last year, the single female member on FIFA’s 12-person Independent Governance Committee board quit after being open about the sexism endemic in FIFA. Sports writer Kate Fagan has argued that one way to root out sexism in the sport is to have more women in leadership positions within FIFA. In addition to the one-woman Independence Governance Committee, FIFA’s 25-person executive committee has only one woman—Lydia Nsekera of Burundi—and she has been there for about a year. Fagan says that the decision to include Nsekera on the committee is itself ridiculous: “FIFA decided to designate one seat on the executive committee for a woman, initially labeling the position as the ‘representative of women’s football.’ That was crossed out—literally, there is a line through it in the FIFA documents—in favor of ‘female member of the executive committee.’” They drew a line through their sexism as if that would take care of it. 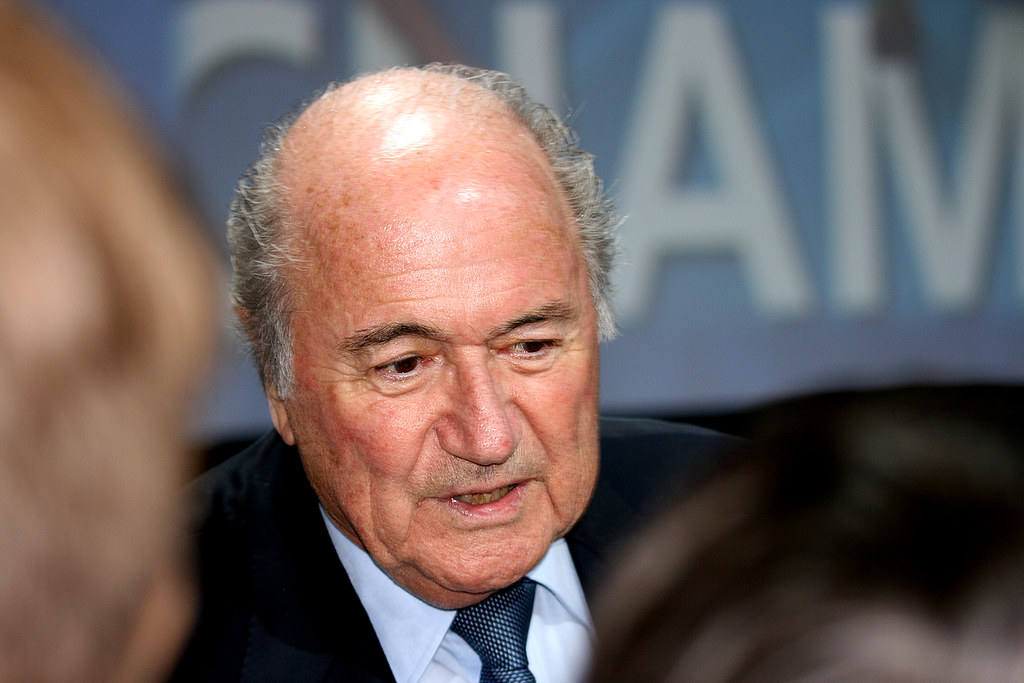 Last month, Grant Wahl wrote a piece at SI.com that began thusly, “Chances are, if you’re a woman and you’ve had much contact with the leadership of FIFA, you have a story to tell about sexism and soccer’s world governing body.” Wahl goes on then to chronicle some of those stories. He also interviewed Julie Foudy, who played for the US team for 17 years and is now a commentator. She told Wahl that part of the issue is the lack of support for women’s teams on the national level. She wants to see “more national federations be mandated by FIFA to provide real support for their women’s programs.” These words seem prescient now that Trinidad and Tobago’s women’s team coach was begging on Twitter just this week for financial help for his team. Only days earlier, the New York Times ran a feature on Haiti’s women’s soccer team that said the team will “largely fund itself, and mostly outside Haiti.” The literal turf battle now being fought in the Ontario court is the tip of an old, large iceberg.

Former US soccer team player Julie Foudy wrote an op-ed for ESPNW about the use of turf in next year’s World Cup and concluded:

Abby Wambach et al have said they will not, in the end, boycott the Cup if the lawsuit does not go their way. But, like Foudy, they simply want to see the right thing done. Germany’s goalie Nadine Angerer told reporters, “I think the FIFA and the Canadian Soccer Association should give us the best opportunity to play our game and show our best performance and give us the best opportunity.” 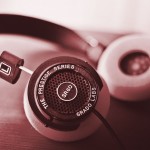