What Does a Feminist Art Show Look Like in Russia? | Bitch Media

What Does a Feminist Art Show Look Like in Russia? 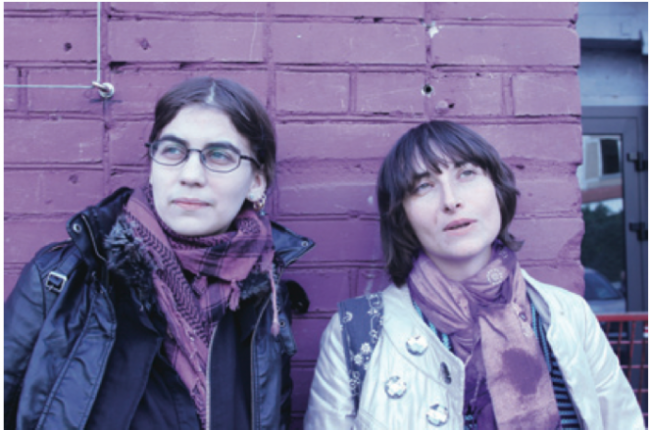 “Graphic art has played a major role in the history of many very different social movements. It created whole currents of revolutionary art, and, of course, maintains its preeminence in the worlds of street and online activism, not to mention printed matter such as zines,” wrote Nadia Plungian, a historian, artist, and activist, whose work in English includes a beautiful booklet of LGBT history in Russia.  “Today, the most important spaces for exhibiting feminist art in Russia are street protests, city walls, and online.”

Part of the inspiration for this exhibit is the graphic journalism of co-curator and artist Vika Lomasko. Since 2006, Lomasko has been a fixture at protests and political trials, drawing the people engaged in Russia's tumultuous political processes. Her work also bears witness to the struggles of marginalized Russians such as sex workers, enslaved migrant workers, and women in the provinces.  The Feminist Pencil also involves workshops and lectures where artists and viewers are invited to discuss women's issues in Russia, in the art world and beyond.  “The Feminist Pencil is a parallel community of women artists who are capable of self-organization and solidarity,” the curators wrote in the show catalogue. “It has long behooved women in Russia to analyze their position and start calling the discriminatory status quo by its name.”

Here is a slideshow of work from Feminist Pencil 2. All the quotes below are translations of artists' statements from the exhibition catalogue. For more about the exhibition, see this English-language story in the St. Petersburg Times. 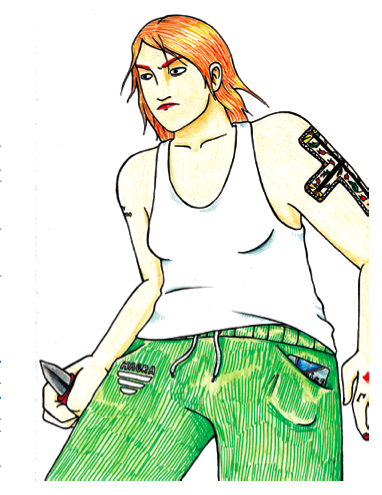 If you notice, this redhead’s track pants are from a brand called Hagra—like the artist's name. Hagra writes, “I see very few images of strong and self-sufficient women in visual art and when they are presented, they are so idealized and perfect, I can’t relate to them. There are many images of regular men who also have the right to their own opinions and happiness, whereas for women, there are only two options: to either be a brilliant superwoman, or stay home and obey your husband and father. It's as though only an extraordinary woman who is miles above and beyond all of the men around her has the right to a voice.” 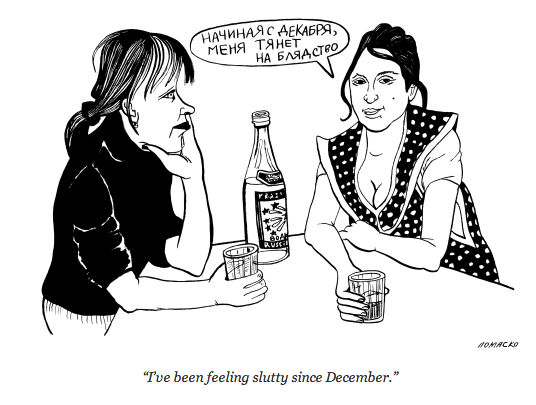 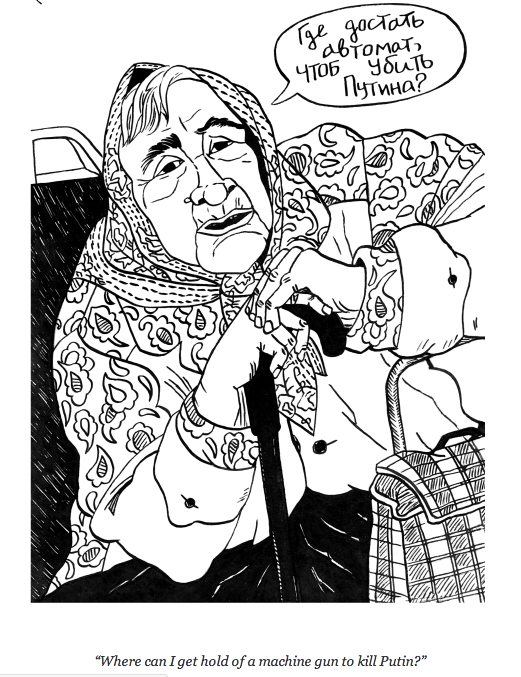 Title: From her series “Feminine”

Lomasko writes: “I was born in Serpukhov, a town in the Moscow Region. The women and girls around me talked about men: acquaintances and strangers, exes, current husbands and boyfriends, and future husbands and boyfriends. We believed that love would change the monotonous course of our lives. I had one other belief—in my calling as an artist. Only my dad, a self-taught artist, supported my plan to study in Moscow and then work as an artist. Some of my girlfriends’ moms tried to force their daughters to spend less time with me, believing that the nonsense I spouted could infect them and get in their way of finding a husband. They were right: I’m still not married and have no children. I became an artist, but I do not feel like a winner. In this country, both their life strategies and mine end up in a loss. I look at the 'heroines' in 'Feminine' and find a part of myself in all of them.”

Excerpts from Vika Lomasko's “Feminine” are translated by Thomas Campbell 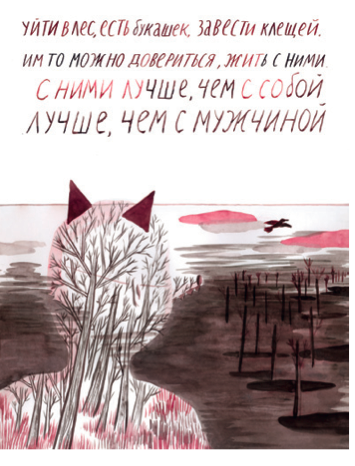 Title: From a series entitled “The Hysterical Writings of Polina P.”

The text here reads: “I could go off into the forest, eat gnats, get bed bugs, I can trust them, I could live with them better than I live with myself, than I would live with a man.” 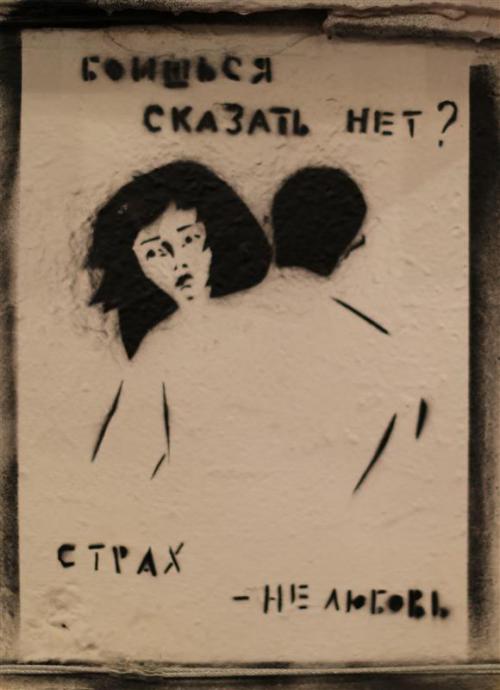 As the artists explain in the show catalogue: “The series of stencils directly addressing the public was inspired by the artist Mikaela's declaration that she wanted to see personal statements from women on every wall. Any woman can be an artist: the desire to say something is sufficient for making a statement.” 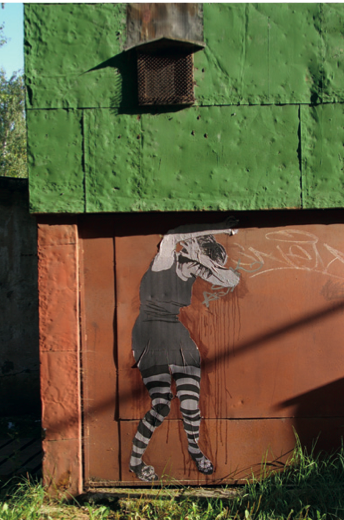 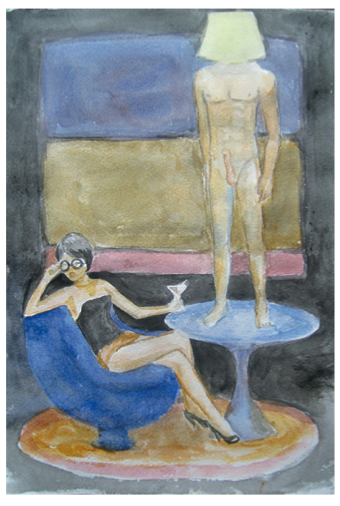 Title: From her series “Games” 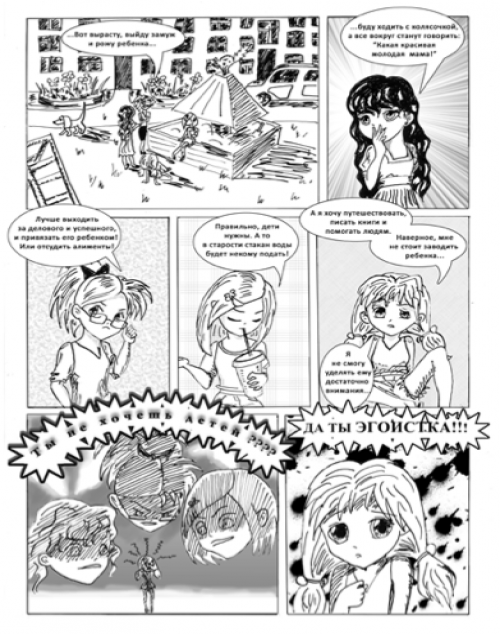 The last two panels of this comic read, “You don't want to have kids? THAT'S SO SELFISH!”

As the artist explains in the show booklet, “All of these comics deal with stereotypes, in this case, with gender stereotypes. After all, its when you are a child that you learn about what you should look like, how you should act, and how you should think in order to survive in society. This information is often contradictory, especially when when it has to do with gender roles.” 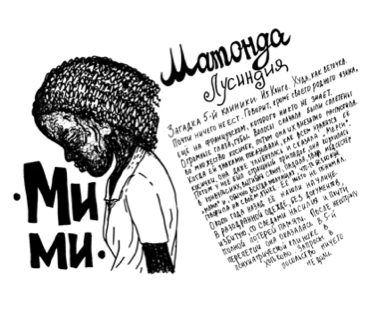 Title: From her series “The Women of Psychiatric Hospital No. 5 in Khot’kovo.”

In this series, Yana Smetanina responds to being committed to a psychiatric hospital and finding that most of the women there—marginalized, abandoned, mentally ill people whom she had been taught to fear—turned out to be survivors of violence. She drew these patients' portraits and wrote down their stories. This is a particularly heartbreaking story about a young woman who is presumably from Congo but none of the facility staff can speak French or her other native language, so no one knows for sure. She was admitted to the hospital after was found unconscious in the street with signs of having been sexually assaulted.  Because the police didn’t know what to do with her, they committed her. At the time when this drawing was made, she had been in the hospital for over a year. 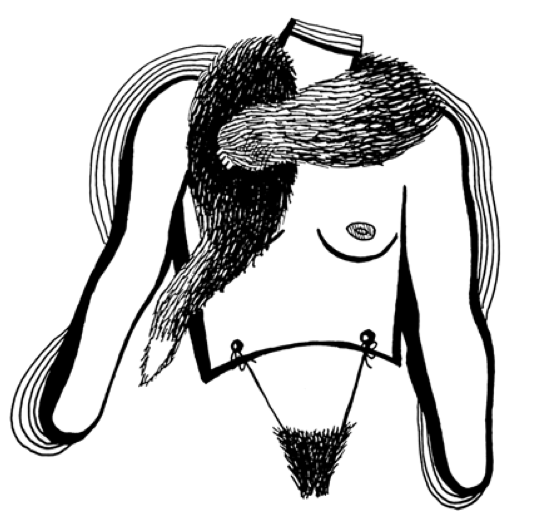 Bela Shayevich is a translator, writer, and illustrator living in Chicago. 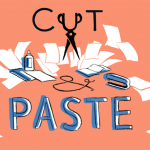