Many feminists have praised Georgia O’Keeffe for her use of “female iconography” in her art (a.k.a. her vagtastic flower paintings). But O’Keeffe always denied this association as a conscious choice and instead claimed her art revealed the sensuality of nature… which to me sounds like pretty much the same thing. At any rate, O’Keeffe has been celebrated as one of the most influential American modernist artists and definitely deserves a place in Feministory, regardless of her feelings about her flowers’ anatomical lookalikes. O’Keeffe was born the second of seven children in the town of Sun Prairie, Wisconsin. Her family were dairy farmers but Georgia wanted something different for herself, and by the age of 10 had decided to be an artist. After graduating high school, O’Keeffe attended the Art Institute of Chicago from 1905 to 1906. In 1907, she moved to New York City to study at the Arts Students League. After finding it difficult to make a name for herself as an artist in the Big Apple, she moved back to Chicago and worked as a commercial artist in 1908 and didn’t paint for four years. But in 1912, O’Keeffe took a summer school art class at the University of Virginia which relit her spark. She started painting and drawing again, and took an art teaching position in a public school in Amarillo, Texas. After working for a couple of years as an art teacher, O’Keeffe moved back to New York to pursue higher education at Columbia University for teaching. All the while, O’Keeffe was teaching and pursuing a teaching degree from Columbia, she was experimenting in different media.

O’Keeffe’s big break finally came in 1916 when one of her friends, Anita Pollitzer, sent some of O’Keeffe’s art to the photographer Alfred Stieglitz at his New York art gallery, 291. Stieglitz was very impressed with O’Keeffe’s work and showed her art in his gallery. But that’s not all that happened—this exchange was also the beginning of their love affair. Even though Stieglitz was 23 years older than O’Keeffe and still technically married, O’Keeffe moved in with him. In 1924, the two legally wed. Throughout their relationship, they each made art: Stieglitz featured O’Keeffe in his photography and O’Keeffe grew as an artist and began painting some of her more recognizable oil paintings during their relationship, which she was able to show at 921.

O’Keeffe’s is primarily known for her flower paintings, but many do not realize that these flowers were a part of a greater body of work—she was working on painting nature close-up as though through a magnifying lens. While many people think O’Keeffe’s flowers could be used to teach sex-ed, O’Keeffe always denied this association. Perhaps because it was because this was the 1920s, or perhaps the rest of us just have some Freudian oversexed minds, but either way, her flower paintings are still well-known today. After O’Keeffe’s flower/nature oil paintings hit the scene, she was a huge name in the art world. Her paintings were going for high prices out of Stieglitz’s gallery, and she was getting multiple commissions. However, when she was unable to complete a mural the for Radio City Music Hall in 1932, O’Keeffe suffered a mental breakdown and didn’t make art again until 1934.

O’Keeffe recuperated by traveling and returning to the desert of New Mexico which had become a place of artistic inspiration for her. In New Mexico, she bought property which she called “Ghost Ranch,” where she would retreat to gain new inspiration for her work for the rest of her life.

O’Keeffe continued to be sought after as an artist and held two major retrospective art shows: one at the Art Institute of Chicago in 1943 and the second in 1946 at Museum of Modern Art in Manhattan. Her 1946 show at MOMA made her the first female artist to be featured in a retrospective there.

in 1946, Stieglitz became ill and died. O’Keeffe continued to make art and was featured in many galleries across the U.S. In 1972 she was diagnosed with macular degeneration which compromised her eyesight and made it difficult for her to paint, but she continued making art and eventually began sculpting in clay.

O’Keeffe’s prolific work as an artist left an amazing legacy for the art world. In 1977, President Ford awarded her the Presidential Medal of Freedom and then in 1985 she was awarded the National Medal of Arts. Some of her paintings still circulate in galleries and there is a Georgia O’Keeffe museum in Santa Fe dedicated to her work. Although O’Keeffe died at 98 in 1986, she is still a household name for her tremendous impact in the art world.

I don't believe that O'Keeffe was really, in the beginning looking for a "big break". She didn't really ask Anita Politzer to show Stieglitz her work, even though, she didn't object too strongly. It pained her to show her work and she originally made it for herself. Stieglitz (rightly) forced the issue by insisting to show the early abstractions.

One other award to O'Keeffe was that she was named one of the 12 most influential women of the past 50 years in 1933 along with Helen Keller and Eleanor Roosevelt (sorry, not sure by whom). 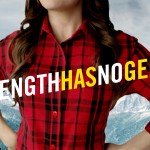 by Andi Zeisler
Since January, my inbox has been brimming with press releases for female-specific products and services described with one or more of the following terms: “revolution,” “empowering,” “strong,” “confident,” and “kickass.”